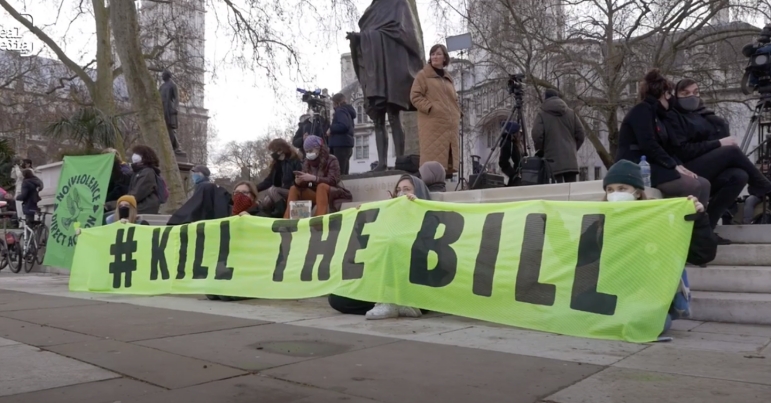 Protests to “Kill the Bill” will be held across the country on 20 and 21 March.

The Tory government’s authoritarian Police, Crime, Sentencing and Courts Bill will not only clamp down on protest but will also target marginalised communities, criminalising the Gypsy and Romany Traveller (GRT) community and introducing more stop and search powers. As the call to action from Cornwall explains:

The new bill gives the police more power to impose conditions on a protest, including ones they view as too noisy…
And it’s not just protest. The bill will make trespass an offence, criminalising Gypsy, Roma and Traveller communities. And it introduces new stop and search powers that will increase racial profiling and harassment.

The Canary warned earlier this week that:

The Bill will ban protests that block roads around Parliament. It also allows the police to impose conditions on one-person protests. And it will introduce a new offence, punishable by up to ten years in prison, of ‘public nuisance’ for actions that cause “serious distress”, “serious annoyance”, “serious inconvenience”.  Yes, that’s right. If you cause serious annoyance on a protest, you could go to jail for a decade!

Oh, and then there’s the ten year sentences for damaging a memorial or statue. Yep – you could get a longer sentence for damaging an inanimate object than the average sentence given to rapists.

As a result, a coalition of groups is coming together to oppose the bill.

Sisters Uncut have led the charge against the bill and in women’s demonstrations. In a press release, an anonymous member urged supporters to keep up the pressure:

The last week has shown that protest works. That’s why they want to ban it, and that’s why we’re fighting back. The coalition that is coming together shows just how many people are angry about the brutal reality of policing in this country, and who are determined to roll back this dangerous extension of state power. Saturday night has shown us that the police are drunk on power, and should not be rewarded with more.

Policing by consent is a story this country likes to tell about itself. The reality is that policing is unaccountable, aggressive and violent. Targets of police repression – working class people, racial minorities, sex workers and many others – have had enough.

Not all details have been announced yet, but protests against the bill will be held in:

Liverpool at 4pm, Saturday 20, location to be decided.

Sheffield, time and date to be announced.

News that the bill has been delayed is welcome and a victory. But the battle is far from over. And everyone still needs to take urgent action to ensure this repressive bill doesn’t become law.