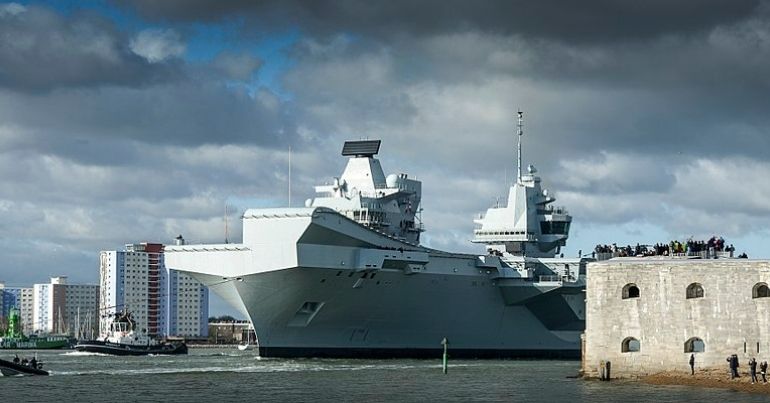 The UK is back in the top tier of naval powers, a senior naval officer has claimed. The comments came as the Royal Navy’s two new aircraft carriers ‘met’ for the first time. The warships are among the biggest produced by the UK. Costings vary, but some estimates suggest the two vessels cost £6.4bn.

Having previously commanded both HMS Queen Elizabeth and HMS Prince of Wales, it was hugely exciting to be present as the two met at sea for the first time.

I know that sense of pride and accomplishment is shared by thousands of others, military and civilian, who have contributed to the Royal Navy’s carrier renaissance over the past decade or more.

The so-called “carrier renaissance” put Britain back at the top tier of maritime power, according to Moorhouse:

The strategic significance is profound. Building one aircraft carrier is a sign of national ambition. But building two – and operating them simultaneously – is a sign of serious national intent. It means Britain has a continuous carrier strike capability, with one vessel always ready to respond to global events at short notice.

Few other navies can do that. Britain is back in the front rank of maritime powers.

The carrier project has been dogged with controversy since it started. As The Canary recently reported, a majority of the fighter aircraft on Queen Elizabeth will be American, not British.

In response to a question in parliament in late April, defence minister James Heappey confirmed:

HMS QUEEN ELIZABETH will embark 18 F-35Bs for CSG21 in two squadrons: eight from the UK’s 617 Squadron RAF and 10 from the US Marine Corps squadron VMFA-211.

Dependence on the US was framed as a strength:

The Queen Elizabeth Class aircraft carriers are international by design and the fact they can operate a mixed US/UK air group is a strategic advantage, offering choice and flexibility to both nations.

In reality, a clear majority of US fighters onboard brings into question the idea that the UK has returned to top level naval status. The Royal Navy’s new ships are an exercise in imperial fantasy and the new shipbuilding plans benefit only arms firms.

In his role as UK ‘shipbuilding tsar’ defence secretary Ben Wallace announced a ‘Blue Peter’ style competition to see who will build a further three warships. Except those competing will be arms firms not kids.

The contract is for three Fleet Solid Support ships, which will travel with the carriers. Wallace said:

As Shipbuilding Tsar, I am delighted to launch the competition for these crucial Fleet Solid Support ships. These vessels embody our commitment to a truly global presence by supporting the Royal Navy’s operations around the world. The competition reaffirms our dedication to invest in shipbuilding and support jobs across the UK maritime industry.

The winning firm will work with international partners to build the ships in UK dockyards as part of a project potentially worth £1.7bn a year over this parliament.

The UK claims to be an ambitious naval power in the top tier. But it can’t even fill the bays of its own aircraft carriers. Meanwhile, the new support ship programme looks like another cash cow for competing arms firms. But the UK government’s desperation to be a global power, and its vast spending to achieve that aim has no benefits and only serves to further line the pockets of arms companies.