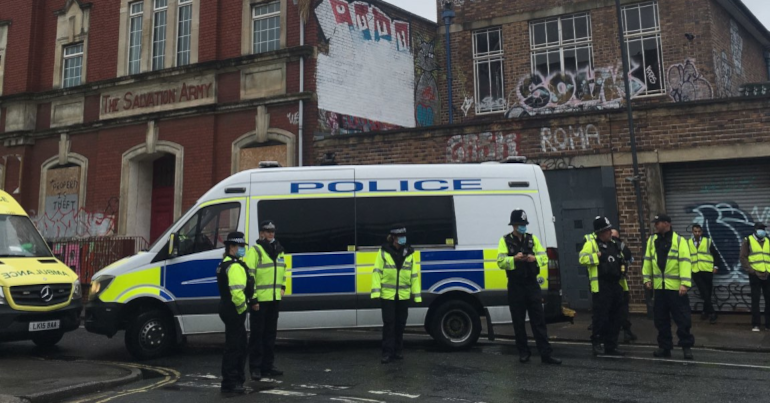 Correction: this article was updated 30/06/21 to show that 2 people were arrested, not the previously reported single person. The article was also updated with comment from the Salvation Army.

A group of squatters were evicted from a building owned by the Salvation Army in Bedminster in Bristol yesterday. The squatters claim that the eviction was done without the required legal documentation.

The residents of the squat were self-isolating after testing positive for coronavirus (Covid-19).

A press release from the squatters says:

The Salvation Army squat was evicted this morning at 5am without the required legal documentation.

The squatters argued that the documentation shown to them by the bailiffs was “suspect”‘ and that Bristol County Court had previously assured them that no eviction was scheduled to take place.

The Canary has been informed that two of the squatters were arrested and taken into custody. One of the arrested people had tested positive for coronavirus. The arrest – and the fact that people were made homeless when they needed to be self-isolating – highlights how dangerous these kind of evictions are, when infection rates and deaths from the virus are rising.

Everyone was aware of the risk, but went ahead anyway

We were not aware of anyone isolating with covid prior to the eviction, which was carried out by bailiffs and the police.

Some of our older buildings are not designed to offer the intense wrap-around care needed to support vulnerable people and the reason we are selling them in order to reinvest in that tailored support.

However, the squatters point out that the police, the bailiffs, and the Salvation Army were actually all aware of the risk:

At the time of eviction the occupiers were all unwell with covid and they informed the Salvation Army of this. The state enforcement certainly had this information, as they were told this by the occupiers repeatedly.

“Forced to free range the streets of Bristol, homeless and exhausted”

The residents of the Dean Lane squat were made homeless by the eviction, unable to take proper precautions to prevent the spread of the virus. This seems ridiculous when Bristol is experiencing rocketing coronavirus infections. According to the squatters:

The bailiffs came whilst people were sleeping. The occupiers had no energy to resist. They are now forced to free range the streets of Bristol, homeless and exhausted.

A free rein to evict

The Canary contacted Avon and Somerset Constabulary for a comment. They passed the buck, saying:

This was bailiff-led action enforcing a court order on behalf of the Salvation Army.

Police were only in attendance to prevent any breach of the peace.

However, the police presence was large, and bystanders reported that a police drone was used during the eviction.

The eviction at Dean Lane was just the latest in a string of squat evictions across Bristol. Bristol’s squats provide an important community resource, bringing unused buildings back into collective use. The squatters point out:

“We have the backing of the law, we don’t need to show papers”

According to the squatters:

Upon being questioned, the sheriff admitted smugly whilst evicting the occupiers from their home “we have the backing of the law, we don’t need to show papers.”

The residents of Dean Lane link this lack of accountability to the current plans to increase police powers in the UK through the Police, Crime, Sentencing and Courts Bill:

This is clear evidence that the police will soon have powers to act in any way they see fit, regardless of the law. The events seen are a clear foreshadowing of what they are trying to intimidate innocent people with. If they bring in the suggested police powers bill they will be able to continually squash any small bit of freedom we are still entitled to. This it why it all comes back to us. The people. We need to support and educate one and other and stay United.

“We have the tenacity and determination to survive”

The residents of the evicted Dean Lane squat conclude their statement with a call on their comrades to keep on fighting:

The police are supposedly here to protect its citizens, but as usual the state is keeping us divided, and robbing us of our homes, our safety, our rights, and our land. However, we have something they don’t; humanity, connection, understanding, creativity, Solidarity. We have the tenacity and the determination to survive and thrive under what is becoming a fascist state and all though times are looking bleak it’s our responsibility as humans and comrades to keep pushing forward.

Featured Image provided to The Canary with permission