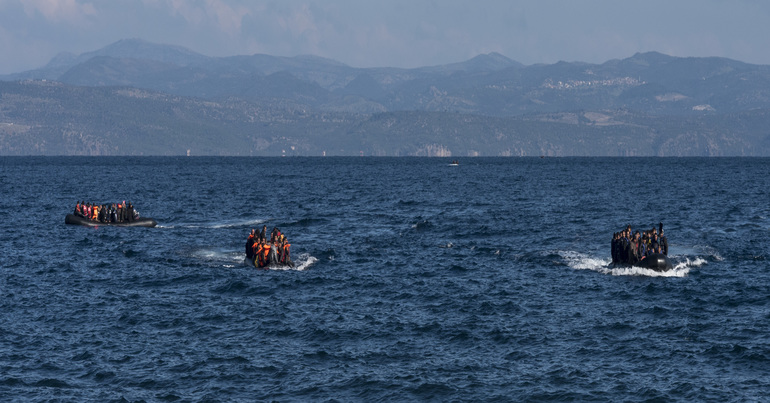 Asylum-seekers trying to come to the UK on small boats, and their people-smuggling enablers, will face heavier prison sentences in a bid to prevent “asylum shopping”, the Home Office has announced.

However, despite the claim that these vulnerable people ‘shop around’, the UK actually sees considerably fewer asylum applications than neighbouring countries like France and Germany. Moreover, the support UK asylum-seekers receive is minimal.

The stricter enforcements form part of the Nationality and Borders Bill. The bill is due for its first reading in the House of Commons on 6 July. And it’s part of home secretary Priti Patel’s pledge to “fix” the UK’s “broken asylum system”.

Other Conservative home secretaries have vowed to fix the asylum system in the 11 years that the party has been in power. The system seems to remain allegedly “broken” despite the party being demonstrably in charge of it for over a decade.

A clause contained in the new Home Office legislation will broaden the offence of arriving ‘unlawfully’. If the bill passes, the offence would encompass arrival as well as entry into the UK. The move is designed to allow those who are intercepted in UK territorial seas to be brought into the country to be prosecuted, aides said.

The proposed legislation intends to make it a criminal offence to knowingly arrive in the UK without permission. And the maximum sentence for those entering the country ‘unlawfully’ could rise from six months’ imprisonment to four years.

The government also plans to increase the tariff for people smugglers. And those found guilty could face a life term behind bars, up from the current maximum of 14 years. The Home Office said the sterner punishments were a bid to prevent “asylum shopping”. The department alleges some asylum-seekers are “picking the UK as a preferred destination over others” when asylum could have been claimed earlier in their journey through Europe.

The bill’s unveiling comes after record numbers of people have made the perilous journey across the English Channel this year. Nearly 6,000 people reached the UK in small boats in the first six months of 2021. A total of 8,417 reached the UK in 2020.

Britain as a “preferred destination”?

Answering whether the UK has “more asylum-seekers than most countries”, the UN Refugee Agency (UNHCR) writes:

No, it does not. In the year ending September 2020, the UK received 31,752 asylum applications from main applicants only.

Over the same period,  asylum applications to other EU countries have also seen a slight increase. In the year ending March 2020 (the latest period for which data is currently available), the highest number of first-time asylum applicants was registered in Germany with 155,295 first-time applicants followed by France with 129,480, Spain with 128,520 and Greece with 81,465.

These four Members States account for around three quarters of all first-time applicants in the EU-27. These figures include  all asylum applicants, not just main applicants (i.e. including children and other dependents). World-wide  around  85%  of all refugees live in developing regions , not in wealthy industrialised countries.

On how many refugees live in the UK, UNHCR notes:

According to UNHCR statistics, at the end of 2019 there were  133,094  refugees, 61,968 pending asylum cases  and  161  stateless persons  in the UK. The vast majority of refugees – 4 out of 5 – stay in their region of displacement, and consequently are hosted by  developing countries. Turkey now hosts the highest number of refugees with 3.6  million, followed by Pakistan with 1.4 million.

Writing for The Canary on the government failure to swiftly process asylum applications, Joe Glenton argued:

Bashing poor and desperate people is what UK governments are all about. But the figures tell a story. A majority of displaced people in the EU, and many who make it to the UK, are victims of UK foreign policy. There are reasons that places like Iraq, Afghanistan, and Syria are so well represented in refugee statistics and the UK’s ever-growing asylum-seeker backlog.

Officials said the draft law was about “sending a clear message to migrants thinking about paying people smugglers to make dangerous and illegal journeys to the UK”.

Our new plan for immigration is fair but firm.

We will welcome people through safe and legal routes whilst preventing abuse of the system, cracking down on illegal entry and the criminality associated with it.

The Conservative election manifesto promised to change the immigration system. Patel in March said she wanted to tackle “illegal migration head-on”. It came as she announced what she called the “most significant overhaul of our asylum system in decades” in a bid to “deter illegal entry into the UK”.

But according to Refugee Council:

There is no such thing as an ‘illegal’ or ‘bogus’ asylum seeker. Under international law, anyone has the right to apply for asylum in any country that has signed the 1951 Convention and to remain there until the authorities have assessed their claim

The Home Office, when announcing the bill, said it was:

very likely that those travelling to the UK via small boat will have come from a safe European Union country in which they could have claimed asylum.

Where this is the case, they are not seeking refuge at the earliest opportunity or showing good reason for seeking to enter the UK illegally but are instead ‘asylum shopping’ by picking the UK as a preferred destination over others and using an illegal route to get here.

However, because of its geographical location, it’s incredibly unlikely that any asylum seeker could reach the UK without first passing through a “safe European country”. With this in mind, the Home Office is effectively arguing that the UK shouldn’t have to take in any refugees or asylum seekers. And that the responsibility should fall entirely on our neighbours – a situation which is largely already the case.

According to figures the government shared in March, around 62% of all claims are from people who have entered the UK “illegally”. And 42,000 failed asylum seekers are still living in the country.

The Home Office said changes brought about by the bill would take into account how someone entered the UK for any subsequent asylum claim. The department would consider whether the applicant’s arrival was ‘legal’ or not, and their status in the UK if that claim is successful.

The Whitehall department added that it will also attempt to prevent individuals making repeated “meritless” asylum claims designed to delay their removal.

While the Home Office continues to make no safe and legal routes to the UK available for those claiming asylum, some people will continue to be forced to risk their lives to do so – including in small boats across the Channel.

Instead of peddling deliberately misleading myths and untruths about asylum and migration, the Home Office should be establishing safe routes for those few people escaping persecution who wish to seek asylum here.

The truth is that Britain receives about as many refugees as you’d expect for an island at the edge of a populated continent.

The Tories don’t want people to know that because they want people to be angry. Angry at the small number of desperate people who come here. Angry enough to ignore that the Tories have been scapegoating refugees while destroying the welfare state for over a decade.

Imprisoning asylum seekers won’t fix a problem that doesn’t exist. It will, however, give yet another home secretary yet another chance to virtue signal to the voters who eat this stuff up.