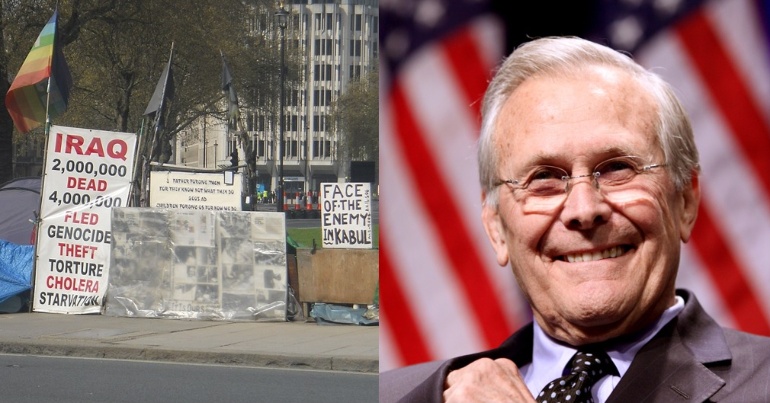 One of the founding fathers of US neo-conservativism has died. There’s a saying that ‘we shouldn’t speak ill of the dead’. But while this might be a reasonable rule of thumb for civilians, if applied to public figures it would preclude a proper examination of their impact while in public life. Worse still, doing so could mean shielding serious crimes from the critical examination and condemnation that they rightfully deserve.

A long career in Washington, beginning in the 1960s

On 30 June, former US secretary of state Donald Rumsfeld died at the age of 88. A spokesperson for the family said that his death was caused by a type of blood cancer.

Rumsfeld had a long career in Washington, serving in many different roles under three different presidents. He entered the US congress in 1962 at the age of 30 representing the midwestern US state of Illinois. His first role to bring him major attention was as an aide to the infamously corrupt Richard Nixon. Nixon was US president from 1969 until his resignation in disgrace in 1974. Rumsfeld later became secretary of defence when he was appointed to the role by Nixon’s successor in the White House, Gerald Ford.

But it was for his second stint as secretary of defense under George W. Bush, in the aftermath of the September 11 2001 attacks, that he’s now best remembered. During his time in the Bush administration, he was a close ally of then-vice president Dick Cheney. And along with Cheney, John Bolton, and Bush himself, Rumsfeld was amongst the major proponents for the US’s so-called ‘War on Terror’.

No remorse or admission of fault

As would be expected, the corporate-owned media largely gave Rumsfeld a free pass in their obituaries. They showed a particular tendency to give inordinate attention to trivia and anecdotes. Some regaled his purportedly prolific production of memos. Others referred to his status as the youngest secretary of state under Ford and then second oldest under Bush. The New York Times, meanwhile, reminisced about “his one-handed push-ups and his prowess on a squash court.”

Fortunately, however, some publications broke the mold. Crucially, they called Rumsfeld out for the liar and warmonger that he was. The Atlantic, for instance, described him as “the worst secretary of defense in American history”. It even deemed him “worse than the closest contender, Robert McNamara”. McNamara served in the role during some of the bloodiest years of the US’s involvement in Vietnam and Cambodia.

But unlike Rumsfeld, at least McNamara admitted some fault and expressed some remorse for his complicity in the hundreds of thousands of deaths his decisions caused. Crucially, he eventually resigned and called for a negotiated settlement to the conflict. Rumsfeld, on the other hand, stubbornly refused to admit fault and was ultimately fired by the Bush White House in 2006. Till the day he died, he never expressed any regret for the Bush administration’s foreign policy decisions.

A warmonger and a liar…

Some of the worst of these decisions include:

Rumsfeld was also infamous for his arrogance. He had a penchant for reveling in the US’s peerless military might and unilateralism. He was once asked, for example, whether the US would ‘go it alone’ in Iraq without the support of the UK. Rumsfeld responded dismissively that, though he would welcome British involvement, there were “work arounds” should the UK withdraw support for the planned invasion.

…and a corporate lackey too

Perhaps the most overlooked aspect of Rumsfeld’s character and career, however, was his shameless toadying to corporate interests. Though largely ignored in the corporate media, there is, in fact, considerable evidence that the Bush administration’s foreign policy was guided in large part by the interests of US corporations.

As The Canary has previously reported, in the wake of the Iraq invasion, lucrative contracts were handed to some of corporate America’s biggest players. Petroleum giant Halliburton, for instance, was the recipient of a $1.7bn deal to operate in the oil-rich country. A decade later the amount had risen to over $39bn. Bechtel, another major US corporation, received a $680m contract to rebuilt Iraq’s infrastructure, which was later increased by $350m.

Escaping the prospect of justice

Writing in Jacobin, Ben Burgis points out that:

In 2006, Berlin attorney Wolfgang Kaleck filed a formal criminal complaint against Rumsfeld and several other American officials for their involvement in torture. Needless to say, Rumsfeld never had to see the inside of a courtroom in Germany or anywhere else.

This is a prime example of the incredible, self-serving hypocrisy behind the entire neoconservative mentality. Rumsfeld’s type are constantly banging their drum about ‘law and order’. Yet, as they call for longer sentences for petty street criminals, their own crimes of much greater magnitude are committed in an atmosphere of near total impunity.

Though, of course, reveling in another person’s death would be vulgar, we must also point to the crucial reality. Namely that, thanks to Rumsfeld’s actions and decisions, many people never made it anywhere close to 88 years of age. As Burgis puts it, since he never faced justice for his actions: “In that sense, and only in that sense, Donald Rumsfeld died too soon”.