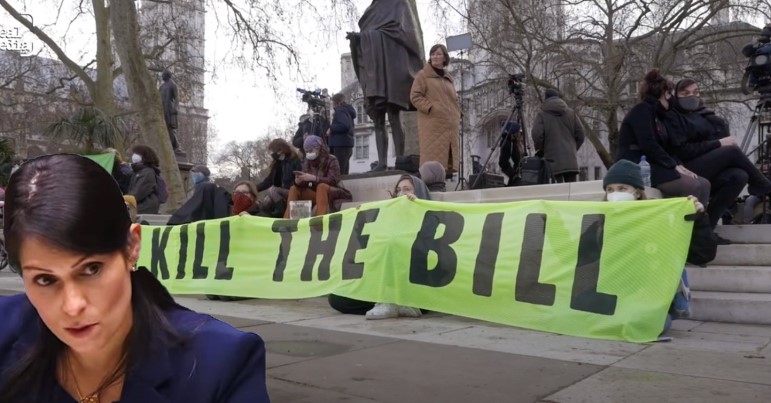 Home secretary Priti Patel’s authoritarian and regressive Police, Crime, Sentencing and Courts Bill (the Police Bill) is back in parliament on Monday 5 July. So, once more, it’s time to try and #KillTheBill.

The Police Bill has caused uproar. Many see it as racist against Black people and the Gypsy, Roma and Traveller (GRT) community. It will also clamp down on our right to protest and take strike action. Amnesty said of the bill:

In its current form, the bill represents an enormous and unprecedented extension of policing powers which would effectively give both police and Government ministers the power to ban, limit or impose undue restrictions on peaceful protests on the grounds that they might be ‘noisy’ or cause ‘annoyance’. It also extends police powers already used disproportionately against Black people, and severely restricts the right to roam.

In recent months, there have been numerous protests against the bill. #KillTheBill protests in Bristol were marred by police violence. As Sophia Purdy-Moore reported for The Canary:

On 1 July, the All-Party Parliamentary Group (APPG) on Democracy and the Constitution published a report following its inquiry on the policing of the Sarah Everard vigil in London and Kill the Bill protests in Bristol.

The report confirms that Avon & Somerset Police “failed to distinguish between violent and peaceful protestors, leading to the use of force in unjustified situations”.

That isn’t stopping the Police Bill going through parliament. But nor is it deterring people from protesting to #KillTheBill again.

Back in parliament. Back to protesting.

On 5 July, the bill is being debated in parliament once more. The government is giving the bill its third reading. This gives other parties the chance to put forward amendments and have them voted on. So some campaign groups have organised a demo.

Sisters Uncut and All Black Lives UK will be protesting to #KillTheBill at Parliament Square from 2pm on 5 July:

We’re gonna be back outside Parliament on Monday with @AllBlackLivesUK. Bring your masks, bring your mates, bring your mum – we’re gonna make some noise and make sure that Priti knows that amending this bill isn’t enough. The whole thing has to go. pic.twitter.com/aGT1yCsdwc

If you’re going to the #KillTheBill demo, expect a heavy police presence. Coronavirus (Covid-19) rules may have relaxed around public demos, but that doesn’t mean policing will relax. Also, follow these simple steps from legal group Green and Black Cross to protect yourself. Make sure you read The Canary‘s full details of them here:

And watch out for the so-called ‘Blue Bibs’. These are police liaison officers. They may appear friendly and make idle small talk, but they’re actually trying to get info on you and those you’re protesting with. So in other words, do not engage with them.

The best time to protest

It may seem like the issue is never going away. But nor is the anger over it. So what better time to express this than when MPs are talking about it. And what better place to do it than outside parliament itself.