Marr just let the Tories get away with 'murder' - The Canary 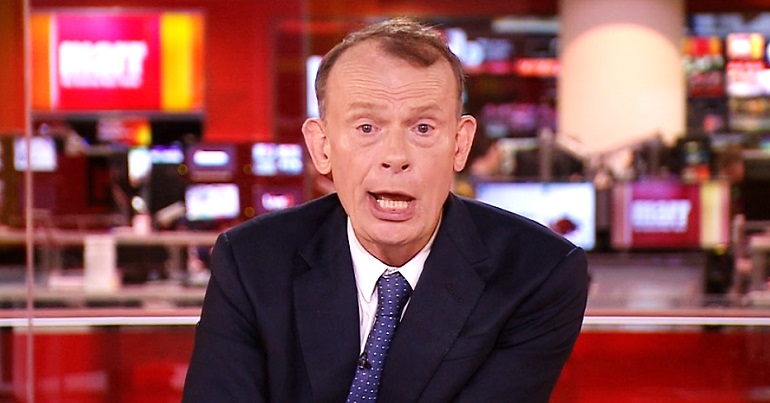 On Sunday 4 July, the Andrew Marr Show let the Tory government get away with what one person called “murder“. Because yet again, the host failed to hold a government minister to account over the coronavirus (Covid-19) crisis.

It’s been widely reported that the government will end all coronavirus restrictions on 19 July. As PA reported, rumours were abound in the Sunday newspapers that Boris Johnson, who’s due to update the nation this week on plans for unlocking, wants to scrap social distancing and mask-wearing requirements on so-called “Freedom Day”. So, enter communities secretary Robert Jenrick to confirm this on Marr.

PA reported that he told the host:

It does look as if, thanks to the success of the vaccine programme, that we now have the scope to roll back those restrictions and return to normality as far as possible… It does feel as if we are now in the final furlong, in a period in which we can start to live with the virus and move on with our lives.

One specific “roll back” Jenrick and the Tories are carrying out has caused uproar on social media.

We are now going to move into a period where there won’t be legal restrictions – the state won’t be telling you what to do – but you will want to exercise a degree of personal responsibility and judgement.

As PA reported, this looks like it means we’ll no longer have to wear face masks. Marr pushed Jenrick on the issue. But he used the angle of “social tension”; that is, some people would still wear masks while others wouldn’t. Jenrick said:

We trust the British public to exercise good judgement.

But Jenrick also said he couldn’t make the “commitment” that the government would ease all restrictions. We’d have to wait for Johnson to give it the go-ahead.

Unbelievably, Marr left it there. He didn’t question the issue of whether it was safe to not wear a mask after 19 July. This is despite cases of the Delta variant rocketing. And while deaths are not currently rising, the more cases there are the more likely it is that a new, and potentially more vaccine-resistant, variant could emerge. Moreover, none of this solves the issue of long Covid. So, it was down to Twitter to confront the issue:

#Masks primarily protect others, not the wearer. “Choice” not to wear one is choice to inflict risk on others more than yourself. Selfish, irresponsible & above all destructive to public health. Shame on non-medics Jenrick & Javid for promoting this. #bbcbh #Longcovid #morbidity

It only takes one non mask wearing, #COVID19 positive person taking "personal responsibility" to infect Tesco for everyone else wearing masks and this gives the public a license to do that.

One user made a sarcastic but important point:

Jenrick says no masks because 'the state won't be telling you what to do'.

Wonderful news!
I'm driving through red lights, no seatbelt, ignoring speed limits and all road markings. And when I get to Tesco I won't bother with the checkout because I won't be told what to do.

Richard Murphy noted the risks of long Covid in children:

Children get long Covid. This government knows that. And it wants them to get it by letting Covid rip through the school aged population. That makes this the first democratic government in this country with a policy to deliberately harm a whole generation. Staggering…….

Another user said this would lead to “avoidable deaths”:

Jenrick says masks will become a matter of personal choice on July 19. This will result in avoidable deaths. The only question is how many.

And as The Canary‘s weekend editor Afroze Fatima Zaidi summed up:

We ended lockdown too early last yr and sent kids back to school in Sept and then had the 2nd wave. We’re now on cusp of a 3rd wave thanks to Delta variant (95% of UK cases) but still reopening 19 July. People will die all over again because this govt keeps putting profits first.

So, as the Baker Street Herald said on Twitter, some people might compare what the Tories are doing to “murder”:

The pathologically negligent Tory government is once more putting business and profit before the lives of its citizens. It’s sadly predictable how this might end.