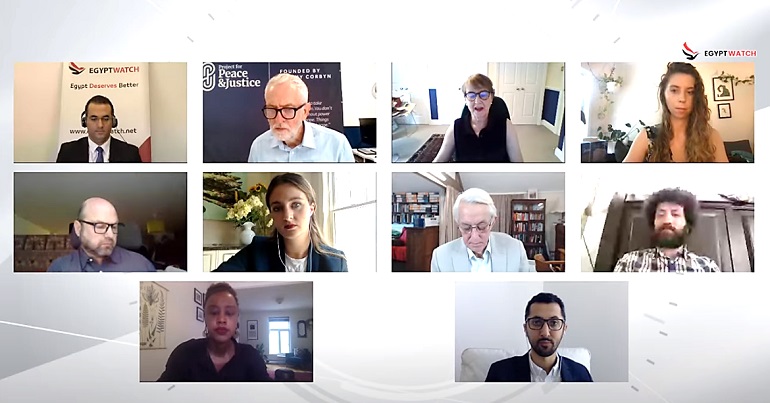 Jeremy Corbyn’s new project just held an international conference. It looked at the impact of global arms sales and why they need to be controlled. And aside from offering some lively discussion, the event also showed the potential of the former Labour leader’s new organisation.

The arms trade: under the microscope

On Saturday 17 July, the Peace and Justice Project (PJP) hosted an online event called Why the International Arms Trade Must be Controlled. It was in association with Egypt Watch, an “advocacy and research platform” which promotes human rights and reports on, among other things, the actions of the country’s dictatorship.

The international arms trade is worth hundreds of billions, and arms deals brokered by the rich and the powerful continue to extend human misery around the world.

2020 US government figures show arms sales were worth just under $200bn in 2017. Overall, as The Canary previously reported, the Stockholm International Peace Research Institute put the global total military spending in 2020 at almost $2tn. So, where does the UK fit into this picture?

The UK is the world’s second largest arms exporter in the world, fuelling conflicts like the war in Yemen which has claimed a quarter of a million lives to date.

As The Canary previously reported, the UK has increased its own military spending by 2.9% since 2019. This increase makes the UK the fifth largest military spender in the world. It’s only behind the US, China, India, and Russia. On top of this, the UK government has committed to a four year £16.5bn rise in defence spending. The government is spending this amount on space technology, more nuclear warheads, drones, and hackers. Experts say this will be the largest real-term increase in defence spending since Margaret Thatcher’s times.

So, the PJP event looked at the issues surrounding our world’s ever-increasing militarisation.

Former South African ANC MP Andrew Feinstein spoke about the broader picture of the arms trade. He noted that:

Politicians, their political parties, corporate executives and their companies, military and intelligence leaders and a range of intermediaries – including arms dealers, the world’s biggest banks, global law firms, auditing firms, and other consultancy services – all benefit materially from the trade in weapons. It is therefore absolutely crucial to understand besides the geopolitical motives for conflict, the economic and corrupt motives as well.

While this level of corruption is rife in the UK, one speaker highlighted that it happens in Canada too. Director of the Canadian Foreign Policy Institute Bianca Mugyenyi noted that:

It’s important also to get one thing clear: it’s not just private companies selling arms to foreign governments. The state apparatus is advancing it.

She added that Canadian government departments:

grease the wheels of the arms industry. The LAV [light armoured vehicle] sale to the Saudi government… is a contract between the Canadian [government] and Saudi Arabia.

Yemen and the Middle East

Of course, Saudi Arabia is also using UK and Canadian-supplied weapons in its continued assault on Yemen. As The Canary previously reported, targeted air strikes from the Saudi Arabia-led coalition have killed more than 8,000 civilians in Yemen. That coalition’s blockade has also caused an increase in food and fuel prices that’s responsible for widespread food insecurity. But as research director Abdullah Alaoudh noted:

Despite the wide-ranging concerns in the US and the United Kingdom about Saudi Arabia’s military intervention in Yemen, both Washington and London continued their support and continued to export arms to Saudi Arabia… A total of 73% of Saudi’s arms imports came from the US and 13% from the UK. So we see here, these are the major democratic countries that are calling for democracy [in the Middle East]… Nonetheless, you see these arms sales to most brutal, authoritarian regimes and dictatorships in the Middle East

Moreover, journalist and activist Sherif Mansour noted how Western arms sales to the Middle East and North Africa also result in those governments abusing their own citizens’ human rights:

It’s the quiet war that goes [on] every day… Where the governments actually use violence against their own population to build the fear barrier; to stop them from ever dreaming to be free like they did ten years ago in the Arab Spring.

Mansour’s home country Egypt is one example of this. Over the last three years, the UK government signed off on the sale of £24m worth of weapons to Egypt. This is despite its dictatorship being a human rights abuser. For example, it detained over 4,000 people for protesting in September 2019 alone.

So what can we do about governments being embedded in the arms trade?

Some of the event’s focus was on Israel’s long-standing violence in Gaza and the occupied territories. UK Labour Party MP Richard Burgon discussed the Israel Arms Trade (Prohibition) Bill he brought to the British parliament. It says:

that the UK Government should end these arms sales as part of efforts to end Israel’s militarized repression of Palestinians, violations of international law and the illegal occupation of Palestine

Campaign Against Arms Trade (CAAT) says that the UK exported £387m worth of arms to Israel between 2016 and 2020. As Burgon said:

So now’s the time to act, and that’s why on 7 July I presented in our parliament this bill. The bill was presented with cross party support. Since I presented it, I’ve also put down an Early Day Motion which is expressly attached to the bill, welcoming the introduction of Israel Arms Trade (Prohibition) Bill.

In the second half of the event, the panel took questions from the audience. Then, Corbyn closed the event. He said that:

He noted that they founded the PJP:

to bring people together; to challenge war… poverty… injustice around the world. And that’s why we’ve had this conference today. But it only works if we seriously campaign within our own communities, and our own societies, to bring about real change in this world.

There’s no point complaining about the effects of war, of human rights abuses, of children dying of cholera in Yemen, or people’s homes being destroyed in various place around the world, if we don’t do something to stop the sale of arms that is being used to destroy those people’s lives.

It was an interesting, inspiring, and thought-provoking event.

And moreover, it showed the potential of the PJP. It’s support for Egypt Watch is encouraging. And the project’s ability to gather so many experts is indicative of the weight it already carries. The event confirmed that the organisation is willing to take on the corporate capitalist system, and its proponents, without fear or favour. It will be interesting to see where the PJP goes next.

You can watch the entire conference here:

Featured image via the Peace and Justice Project – YouTube