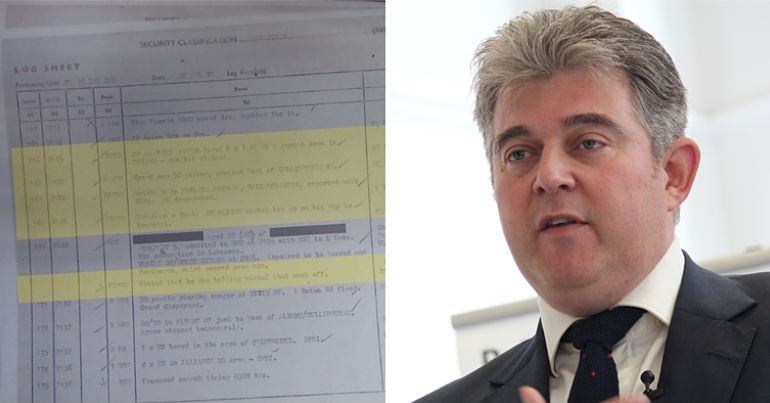 As reported by The Canary, Northern Ireland secretary Brandon Lewis proposed an amnesty that could result in British forces evading justice for their crimes in Ireland. This amnesty would apply to the conflict between 1968 and 1998.

And while some in the mainstream media, and Labour party leader Keir Starmer, say Lewis’s proposal means an amnesty “for terrorists”, the reality is quite different. Because given the lack of prosecutions compared to the eventual admission of wrong-doing by the British establishment, it looks as if the British establishment is trying to whitewash its record during that 30-year conflict.

Sunday 18 July is the 49th anniversary of the killing of unarmed Protestant civilian Thomas Mills. And one campaign group reminds us why we cannot allow this whitewash to happen.

The 30-year conflict in brief

Rather than whitewashing these crimes, Britain needs to admit it was involved in a war – while colluding with loyalist paramilitaries – against Irish republicans. Irish republicans have already done so. They used paramilitary force against the injustice of British rule in the north of Ireland. And they were also fighting to unite Ireland, but failed to that end.

In fighting that war, Irish republicans were responsible for several atrocities. Several Irish republicans, nationalists, and Catholics – so not just republican paramilitaries – have been imprisoned for such acts. And some were imprisoned for no reason at all. The British were also responsible for countless atrocities. But, as extensively reported by The Canary, the British have not met the same kind of justice.

Furthermore, the narrative that terrorists were responsible for 90% of the killings during the conflict is outright nonsense. Unless, of course, this is a British admission of its terrorist role in Ireland. Otherwise, that 90% ‘statistic’ fails to account for the killings that resulted from British collusion with loyalist paramilitaries.

Secret British military archives prove that a soldier of the King’s Regiment killed an unarmed Protestant civilian [Thomas Mills] in his workplace, but the British Armed Forces then covered up the circumstances of the killing and blamed it on the Irish Republican Army.

Paper Trail has published this prior to the planned inquest in October into Mills’ killing. Paper Trail’s new evidence also features:

similar murders of unarmed civilians by King’s Regiment in the summer of 1972 which lay unclaimed by the regiment or, indeed, the British Army.

The family of Thomas Mills welcome this material uncovered by Paper Trail in the run up to the Inquest into their father’s death which is scheduled to begin in Banbridge Courthouse on 4 October 2021. Given the developments in British Parliament in the last couple of days, the exposure of material such as this underlines the necessity for victims and their families to have proper access to justice and the ability to engage in Article 2-compliant coronial proceedings into the circumstances of their loved one’s death.

What is certain is that the British Army’s cover-up of Mr. Mills’ killing was calculated and cold-blooded. The British Army knew its soldiers killed him but instead blamed it on the IRA.

The Canary contacted the Minister of Defence for comment. A spokesperson said:

We continue to assist the Northern Irelands courts and police in relation to legacy matters. Any new evidence found on such matters should be handed over to the police.

No excuse, no amnesty

It is an uncomfortable truth that if we go on without change, the weight of prosecutions will continue to fall disproportionately on veterans, leaving the grim threat of a possible prosecution hanging over them. The state kept records about what happened, while the terrorists did not

That’s a pretty stark admission. However, following his announcement, families fighting for justice took to social media to say they’ll ‘never give up’. Irish minister for foreign affairs Simon Coveney said this proposed amnesty was “not a done deal”. So if the British establishment wishes to airbrush its war crimes from history, it’ll have a fight on its hands.

And while British politicians have made various promises to victims’ families, the one constant is the resolve of these families. This won’t go away as easily as Lewis may want it to.