Tory amnesty proposals are ‘a retrospective licence to kill’ - Canary 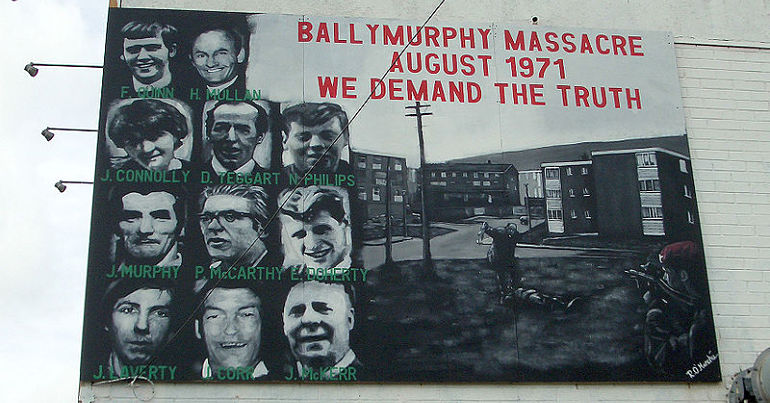 Justice campaigners have warned that a proposed statute of limitations would let soldiers who killed civilians escape justice. The Pat Finucane Centre (PFC) said new plans proposed on Wednesday 14 July were a retrospective “licence to kill”.

PFC & JFF represent over 230 families bereaved north and south of the border. The proposals outlined by Brandon Lewis MP on not dealing with legacy represent a retrospective ‘license to kill’ for the British Army and RUC. This is not about ‘all sides’.

Northern Ireland secretary Brandon Lewis set out the proposals on 14 July. In a Commons speech, he argued for a statute of limitations:

A statute of limitations, to apply equally to all Troubles-related incidents. We know that the prospect of the end of criminal prosecutions will be difficult for some to accept, and this is not a position that we take lightly.

But we have come to the view that this would be the best way to facilitate an effective information retrieval and provision process, and the best way to help Northern Ireland move further along the road to reconciliation. It is a painful recognition of the reality of where we are.

Other proposed measures include a new body to investigate deaths and injuries from the period and an oral history initiative. Such measures seem either very watered down or unlikely to deliver serious justice.

The latest row comes not long after a key trial fell apart. A former paratrooper, known as Soldier F, had been implicated in several killings on Bloody Sunday 1972. The Public Prosecution Service decided not to proceed. It said some evidence would likely prove inadmissible following a decision in a similar case. But Bloody Sunday is just one of many incidents which have given rise to legal cases and inquiries.

PFC itself is named after an Irish lawyer murdered by loyalist paramilitaries. Investigations suggested that British security forces were partially at fault for his death. A double agent who worked for British Army intelligence passed on a picture of Finucane to his killers.

Labour leader Keir Starmer offered mild opposition in the Commons on 14 July. He said that it was wrong to give terrorists an amnesty. He barely mentioned the British military’s actions.

An amnesty for crimes committed during the Troubles in Northern Ireland is plain wrong.

My message to the Prime Minister today was that any discussion has to start with the victims and their families. #PMQs pic.twitter.com/XytcSAoTar

Starmer said he had a lot of experience and knowledge of the north of Ireland. But an interview on 9 July called this into question. Starmer said he would campaign for Northern Ireland to remain in the UK during any border poll.

But, as Peter Bolton wrote on 12 July in The Canary:

Under the terms of the GFA, the British government must remain impartial in the event of a border poll. This is so only voices that represent people in the north can make their case to the people who live there during a referendum campaign. This is particularly important for Irish republicans, who view Britain as a foreign, occupying force. Starmer’s answer to the interviewer’s question, therefore, shows him to be either ignorant of the terms of the GFA or contemptuous of them.

According to Irish News, Tories want the statute debated by autumn. The measures could be law by spring 2022. In the same report, PM Boris Johnson said the plan was the right answer. And Johnson even went as far as saying:

In its Twitter thread, PFC expressed its concerns. These include that inquests into killings could be closed down:

Ballymurphy was a massacre of civilians by paratroopers in 1971. In May 2021, a inquiry found that all those killed had been completely innocent.

PFC also warned that the ‘national security’ argument had often been used to hinder justice campaigners. It questioned Johnson’s interest in any kind of reconciliation:

These proposals show Boris Johnson is running scared of the rule of law & human rights standards. These plans will further undermine confidence in policing & criminal justice structures. This will do nothing to further reconciliation between the peoples of these islands

Without this kind of honest reckoning about the British state’s role in the north of Ireland, meaningful peace and reconciliation still seem a long way off.