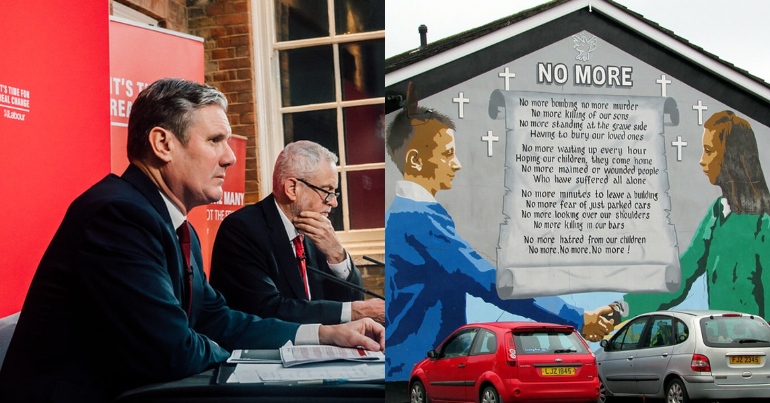 Keir Starmer’s leadership of the Labour Party is already hanging by a thread. Polls have consistently shown him way behind the Tories. And recent by-election results have been disappointing, to say the least. Now, his performance on a BBC Newsline interview has revealed either his shocking ignorance about the peace agreement in Ireland or his lack of concern for its terms. And it would be difficult to know which would be worse.

“I believe in the United Kingdom”

If he did so as PM, this would be illegal & against the Good Friday Agreement

An admission of either ignorance or contempt for Good Friday Agreement

In 1998, the Irish and British governments along with most of the north’s major political parties signed a peace accord. This accord is known as the Good Friday Agreement (GFA), or the Belfast Agreement. It brought the three decade-long conflict in Ireland, sometimes called ‘the Troubles’, to an end. A key provision of the document is a clause that provides a peaceful, democratic route to a fully independent, unpartitioned Ireland. The clause says that the British government should call a border poll on the continued status of the six counties (the north of Ireland) within the United Kingdom, should there be evidence that there is significant support for it.

This was central to gaining the support of Irish nationalists and Irish republicans, who support a united Ireland. Under the terms of the GFA, the British government must remain impartial in the event of a border poll. This is so only voices that represent people in the north can make their case to the people who live there during a referendum campaign. This is particularly important for Irish republicans, who view Britain as a foreign, occupying force. Starmer’s answer to the interviewer’s question, therefore, shows him to be either ignorant of the terms of the GFA or contemptuous of them. Again, it would be difficult to determine which would be worse.

The issue of partition in Ireland gained newfound prominence following the result of the UK’s 2016 referendum on membership of the European Union (EU). Before then, the mainstream media and British government had largely claimed there was no indication of substantial support for a united Ireland. However, the result of the EU referendum changed that perception immeasurably. First of all, while the majority of people in the UK as a whole had voted in favour of leaving the EU, the majority in the north of Ireland voted to remain. This then led to the question of special status for the north, since taking it out of the EU would go against its majority remain vote.

Furthermore, the north shares a land border with the Republic of Ireland, an EU member state. And since the singing of the GFA, there has been an open border without border check points. The EU customs union and free movement principle, meanwhile, meant that goods could travel seamlessly between the north and the Republic. The UK’s exit from the EU, however, opened the possibility of border check points, which would violate the terms of the GFA because it commits to an open border. The government of Boris Johnson initially promised a ‘special protocol’ that would ensure an open border. But now he appears to be yielding to pressure from hard Brexit factions who want to overturn it.

Growing support for an end to partition, even amongst unionists

The Brexit bomb has had the effect of increasing support for a united Ireland. Obviously, a united Ireland would mean no border whatsoever on the island of Ireland. It would also mean the north could rejoin the EU by becoming part of an already existing member state. This has made the idea of a single, island-wide independent Ireland more attractive to many people in the north. This even includes some from the unionist community. Unionists have historically supported the continuation of the north’s status as part of the UK.

To be sure, some remain as staunchly pro-British as ever. Loyalist paramilitaries, for instance, have withdrawn from the GFA and other hardline unionists have taken to rioting on the streets in protest of the ‘special protocol’. However, there are now also indications that other, more moderate unionists are willing to ‘think the unthinkable’ by voting for a united Ireland. As part of a Channel 4 program about support for a united Ireland, Ian Marshall, a lifelong unionist and a former president of the Ulster Farmers’ Union, said that there are “ideas that are being floated that were beyond consideration before and certainly wouldn’t have been entertained by anyone, including myself, in unionism”. Another lifelong unionist, Prof. James Dornan, a physician and lecturer, said:

I would traditionally be thought of as being quite happy with the union… but it’s not so much that I’m thinking the unthinkable, I think everything is on the table at the present.

Reaching parity between unionists and nationalists

As a result of all these factors, the prospect of a united Ireland is looking more and more likely. The genius of the GFA is that it provides a mechanism for both supporters and opponents of that outcome to pursue their political goals through peaceful, democratic channels. By doing so, it ultimately attained majority support from both sides of the community in the north and on both sides of the border on the island of Ireland. In short, the GFA represents the will of the people of all of Ireland and therefore must be be given the utmost respect. As former Labour leader Jeremy Corbyn put it, the GFA must be followed “to the letter”.

In addition to having been an early advocate for peace, Corbyn has always been deeply committed to the GFA. Starmer, on the other hand, seems to either not know what he’s talking about or simply doesn’t care what the GFA says. And this puts another nail in the coffin of his already failed leadership.