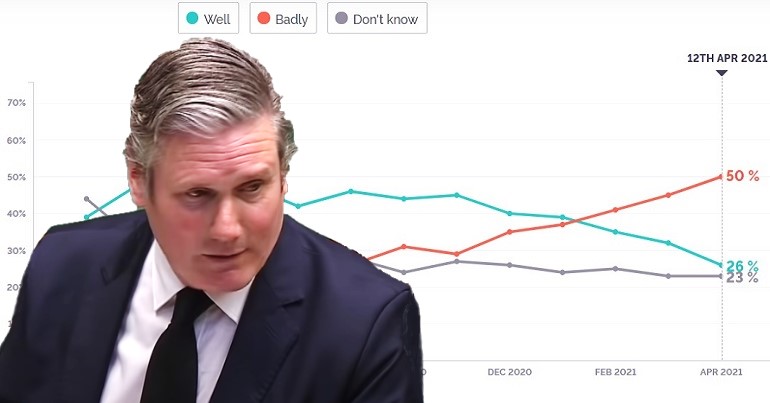 Keir Starmer has been leading the Labour Party for just over a year. And judging by the latest opinion polls, this means that a coup is incoming – well only if you judge him by the standards Labour MPs held Jeremy Corbyn up to – obviously.

As Stats for Lefties tweeted, Starmer is now facing his worst approval rating ever:

On whether Starmer is doing well or badly:

This is Keir Starmer's worst net approval rating in any opinion poll, ever.

YouGov’s polling shows the “don’t knows” have been steady in recent months:

The polling also says that Starmer definitely doesn’t “look like a PM-in-waiting”:

On whether Starmer does or does not look like a PM-in-waiting:

This is Starmer's *worst-ever* rating. pic.twitter.com/Nj6ZIpKYpx

The Labour leader also has a -27 net approval rating with 18-24-year olds. And he’s not even doing well with Labour voters. Boris Johnson, however, is riding high with Tories:

Stats for Lefties made some more crucial points. For example, they pointed out that:

During the leadership election, dozens of Starmer fans told me that Rebecca Long-Bailey was unelectable because her net approval was -16.

But it’s the comparisons to Corbyn’s leadership that are most telling.

Corbyn: a year in

The former Labour leader’s ratings a year into his tenure were worse than Starmer’s. Corbyn’s net approval rating was -40 in September 2016. But viewing the data in more detail, there are some interesting points. For example, let’s look at the north. This is where Labour needs to do well due to the Tories smashing of the so-called “red wall“. In September 2016, Corbyn’s net approval rating here was -33. Starmer’s is -26:

Yet for the “doing well” question, there is only one percentage point difference between Corbyn and Starmer (24% versus 25%). This is not where Starmer needs to be in the north. Moreover, Starmer is losing the 18-24-year-old approval. Corbyn’s ratings were:

But perhaps most crucially, as Stats for Lefties said:

In April 2016, just two months before Keir Starmer backed a coup against the elected Leader, Jeremy Corbyn’s net approval with YouGov was -22.

The point being this.

Let’s judge Starmer by the same standards as many people did Corbyn. On that basis, if the current Labour leader’s approval ratings continue to decline, then backbench MPs should launch a coup in the next few weeks.

As The Canary reported at the time, in summer 2016 172 Labour MPs voted “no-confidence” in Corbyn. 44 frontbenchers quit. One of them was Starmer. So – surely it’s soon going to be time for him to face the same treatment? Well, maybe not – given that Starmer has been frantically purging left-wing people from the party. But if his ratings continue to collapse, then people will surely start asking questions. Won’t they?