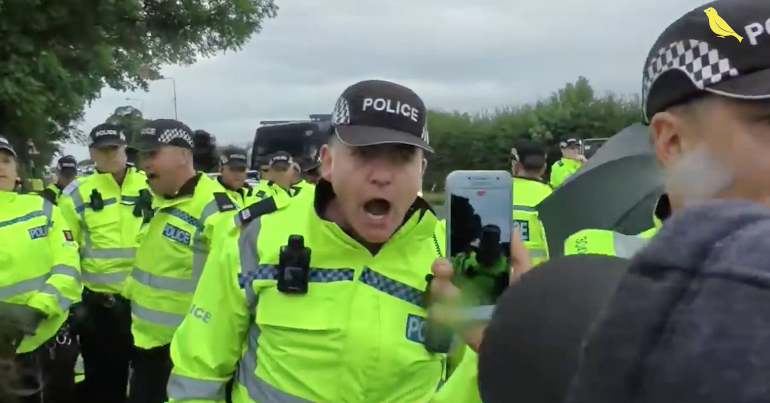 An organisation that represents police officers is kicking off about people sharing videos of arrests and other police interactions on social media. It’s calling for platforms like Twitter and YouTube to do something. But the group’s claim that cops are somehow the victims here doesn’t exactly ring true.

The Metropolitan Police Federation (MPF) is the Met Police’s “staff association”. It represents more than 30,000 cops. And it’s recently hit back at people sharing videos of its officers’ conduct on social media.

The MPF said in a statement that its leader Ken Marsh:

has called for the government and force leaders to tackle social media firms that enable footage of officers dealing with incidents to be shared.

Marsh said it was time to end:

It’s time to step in. We want something done… Officers shouldn’t be subjected to this while simply doing their job.

A specific incident prompted the MPF’s statement. It involved the Met’s Territorial Support Group (TSG) stopping and searching a Black man last year. As the MPF itself said, TSG officers:

stopped [him] under the Road Traffic Act. Officers then searched the man’s car under the Misuse of Drugs Act.

The MPF noted that:

Evidence showed that the man failed to comply with the officers’ verbal demands and refused to show his hands, which led to him being handcuffed in his car.

The incident in question ended with the police officers not finding anything. So, people shared partial footage of the incident on social media. Then, as the MPF wrote, the man:

complained to the IOPC [Independent Office for Police Conduct] that he had been stopped in an aggressive manner, that the grounds for the search were false, that the force used by the officers was unnecessary, and that they had failed to use PPE when searching him and his car.

The IOPC only upheld the man’s complaint about PPE. This is not surprising given the police investigate themselves and it is notoriously hard for people to get any semblance of justice. Indeed, over the last decade, only one in 200 complaints against the Met Police were upheld.

The MPF claim this is an example of why social media companies should stop people sharing videos. But this is not the whole story.

The Guardian reported on the incident in July 2020. As it wrote:

In the original incident… on 23 May, Colaço said he was stopped after being “aggressively tailgated” by the Metropolitan police, with officers then running to his car and banging on his window. They later said they had been able to smell cannabis from his car.

As he queried why he was being stopped, Colaço, 30, was forced into handcuffs, video footage shows. He agreed to leave his car and stood with officers who searched him, while others combed through his BMW and found nothing.

Just days later, police stopped Colaço again. This time, City of London police allegedly smashed his window. It was just after he was on C4 News talking about the 23 May incident and institutional police racism. As reported in March, an IOPC investigation into this incident resulted in it upholding Colaço’s appeal. And it told City of London police to re-conduct its own investigation.

The Guardian said Colaço claimed police have searched him “about 20 times”, but he “did not have a criminal record”.

So, in other words, the incident the MPF is using as an example of why the public shouldn’t share cop videos is arguably an example of the institutional racism that pervades the Met’s use of stop and search. Of course, the MPF would disagree. Marsh said of the 23 May incident:

Yet again my colleagues, after thousands and thousands of pounds have been wasted, have been found to be doing their job exactly as they should.

Police monitoring group Netpol disagrees with the MPF’s call. It told The Canary:

To somehow prove its dubious case for ‘trial by social media’ the MPF started off arguing for the release of all body camera footage. But the Met rejected this idea last year. This was after its own internal review showed officers displaying “poor communication, a lack of patience, a lack of de-escalation before use of force is introduced”.

Now the MPF instead wants the Tories to put pressure on companies like Twitter and YouTube to censor people who share evidence of oppressive policing. This is evidence that has often helped to challenge officers’ misleading versions of events. And it has also led to the disciplining of violent officers. Netpol argues that in the face of the enormous power that officers wield, filming the police is one of the few effective ways of ever successfully holding them to account.

Last year the French government tried to criminalise members of the public who shared images of police officers. But widespread protests forced it to backtrack.

The British government should learn from this clumsy attempt at censorship and ignore the increasingly desperate attempts by the MPF to whitewash repeated cases of misconduct by its members.

Who will police the police?

Just days ago, someone shared this footage on Twitter:

A @Hs2Rebellion non violent peaceful protester doing a slow walk on a public highway was forcefully arrested. Is this an appropriate amount force? #killthebill #democracy pic.twitter.com/jwoVmeTLwz

Should people not share this kind of footage? The MPF thinks not. But the problem with its position is twofold.

Firstly, the MPF seems to believe that its officers are beyond public reproach. That or they just know how bad these incidents look and want to avoid the public holding them to account for their actions.

But secondly, it thinks that the reason for its officers engaging with the victims in these videos is correct in the first place. For example, Colaço is clearly the victim of systemic, institutionalised police racism. Yet the MPF claims its officers are the victims.

This skewing of the narrative is endemic of the current approach to policing. It ties into the contentious Police Bill. And it also shows the creeping authoritarianism that pervades the police and their bosses in government.