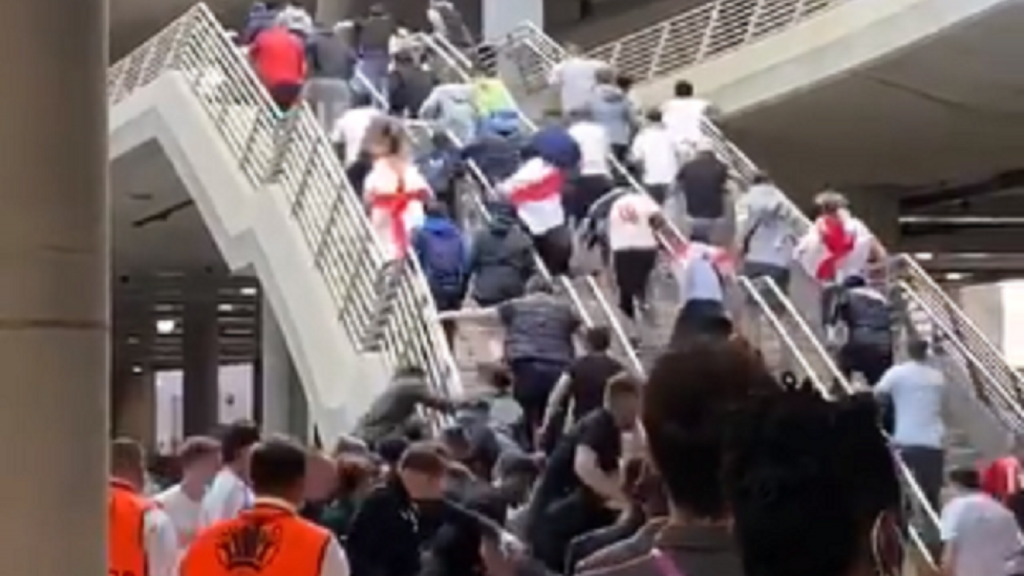 A fan who witnessed the storming of Wembley ahead of the Euro 2020 final has said he was “gobsmacked by the lack of policing” at the stadium.

TV presenter and England supporter Matthew Stadlen described security at the venue as an “absolute shambles” after dozens were able to fight their way past stewards to enter without tickets ahead of the historic game with Italy.

Footage posted on social media showed people forcing their way through barriers and a line of security staff before rushing up the escalators.

While those that entered faced an additional line of security to enter the stands, Stadlen said he knew of at least three supporters who claimed to have got in to watch the game without tickets. He claimed a steward told one of his friends they had accepted bribes from supporters to let them in to the stands.

PA contacted the FA for comment on the claims but did not receive an immediate response. Stadlen told the PA news agency:

I witnessed the storming, literally the storming of Wembley, at the beginning when we entered the ground,

And you had police and stewards sort of overwhelmed and then chasing after various miscreants, it was astonishing.

You couldn’t make it up – the home of football and the most important game this country has hosted since the World Cup in ’66.

I was just gobsmacked by the lack of policing

I just couldn’t believe my eyes that a major stadium event at Wembley at a major UEFA event was capable of being stormed by fans.”

After initially denying that there were any security breaches, a Wembley Stadium spokesman admitted on Sunday that a “small group of people” had made it into the stadium without tickets.

We are now working closely with stadium stewards and security to remove these people.

Anyone inside the stadium without a ticket will be instantly ejected.

Further footage posted online showed a man – believed to be among those entering without tickets – being punched and kicked by supporters within the stadium’s internal concourse. Security staff were seen “rugby tackling people to the ground”, another person inside the stadium told the PA news agency.

He said he was also worried by what he saw as “inadequate” security between the Italian and English sections. He added:

I was sitting right near the Italians and the English fans were separated by a sheet of black fabric,

It just became really nasty between a few of the English fans, two in particular, and one or two of the Italian fans.

A burly police officer came down with some stewards and in the end it was fine but it was quite shocking – it felt like a sort of mini 1980s.

In a statement, the force said:

Earlier this afternoon there was a breach of security at Wembley Stadium, which resulted in a small number of people getting into the stadium without a ticket.

Officers worked closely with security officials to prevent any further breaches. We will also support action by Wembley Stadium officials to identify those without tickets and eject them.

The Metropolitan Police said 45 arrests had been made while policing the event across the capital, with 19 officers injured.