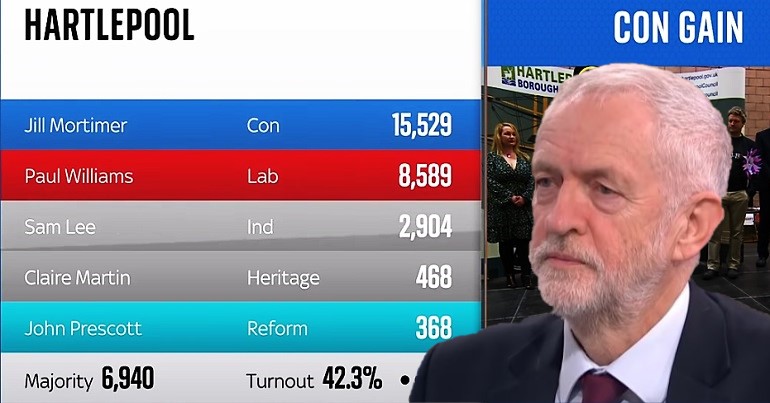 The Tories won the Hartlepool by-election by a fairly large majority. The kickback within the Labour Party, along with possible analysis, has been swift. But the real story of the by-election was not that Labour lost because of Jeremy Corbyn’s legacy. It was that people in their thousands simply didn’t vote.

Not that this problem is anything new.

The result on the Hartlepool by-election that was held on 6 May was as follows:

So, Labour lost the seat to the Tories. As The Canary reported, some people are blaming Corbyn; some are defending Starmer by implying he’s still clearing up the former leader’s mess. Others aren’t. ITV political editor Robert Peston even tweeted:

The crisis for Starmer's Labour in a nutshell. They could blame the 2019 landslide defeat on Brexit and Corbyn. But Corbyn is gone and Brexit is "done". Yet the rot – shown by Hartlepool and local elections (so far) – has got worse. Voters' values and Labour's have diverged

But he managed to miss the most crucial point to the Hartlepool story.

So, the real majority went to the ‘Didn’t Vote’ party. The Canary wrote on Wednesday 5 May that voter apathy would be “the real threat” in the elections. As we reported in terms of Hartlepool it needs to be viewed:

So, it seems that’s what happened. This is hardly a new problem. But it’s one that acutely affects the poorest people.

Social grade is a standard measuring system which breaks people down into the following socioeconomic groups:

Breaking it down by class

In the 2019 general election, around 68% of AB’s voted; higher than the overall result. But for the poorest people (DEs) only 53% voted. It was an almost identical story in 2017 (69% versus 53%). But this has not always been the case. The figures were historically as follows:

So, it seems after 2015 the issue of poor people not voting has become worse. In terms of numbers, in 2016 around 25% of the population were DE. Due to austerity this number may now be higher.

This could crudely be applied to Hartlepool.

So, in the by-election on 6 May, over 11,500 of the poorest people in Hartlepool probably didn’t vote. When looked at in those terms, that’s at least 11,500 poor voters Labour failed to convince. Based on recent data, most of these people would be living in poverty. But once more, this is not new.

As The Canary previously reported, low income people (C2s and DEs) have been abandoning Labour for decades. As we documented, based on Ipsos Mori data:

the moving away of the working classes from Labour began in the early 2000s under Blair. But post-2010 the problem became entrenched.

C2s and DEs continued to move away from Labour, and as The Canary wrote:

So, even under Corbyn, the poorest voters were turning away from Labour. Or they were not voting at all in higher numbers than previously.

A national-level problem – not a Hartlepool one

Hartlepool is a microcosm of a national problem. It’s not all Corbyn’s fault. It’s not all Starmer’s fault. Nor is it the people who didn’t vote’s fault. Voter apathy among poor people is a systemic problem. The establishment political parties have not done much to address this.

The Tory’s win, Labour’s loss, and the biggest majority going to the ‘Didn’t Vote’ party in Hartlepool is a pertinent example of this.