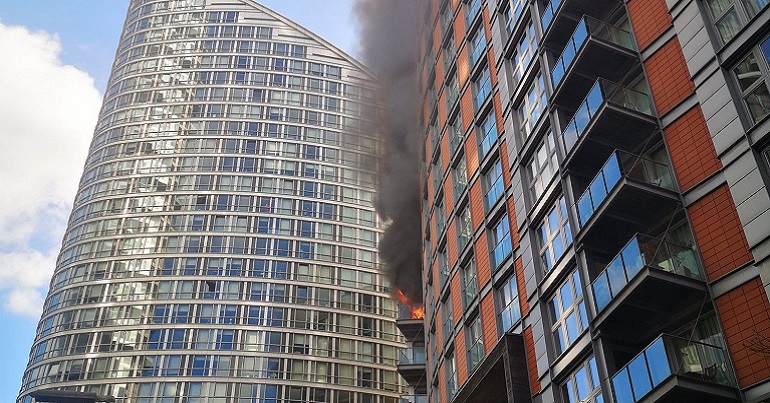 More than 100 firefighters tackled a blaze that ripped through a 19-storey London tower block. It’s believed to be covered in “Grenfell-style” flammable cladding. So, people are already asking how the government allowed this to happen. And a Grenfell survivors group has said “enough is enough”.

As PA reported, on Friday 7 May residents called the London Fire Brigade (LFB) to the New Providence Wharf development. It’s near Canary Wharf in Poplar, East London. The LFB said 100 firefighters and 20 engines were at the scene of the fire, which engulfed three floors:

Firefighters are tackling a fire at a 19-storey block of flats in #Poplar Parts of the 8th, 9th and 10th floors are alight. There are now 20 fire engines at the scene © @ATLondon2 https://t.co/XsbfJEXQqm pic.twitter.com/228AyjNzxf

Pictures and videos on social media show part of the building engulfed in flames, with thick grey smoke pouring out of the block several stories high:

PA reported that the LFB said:

The brigade was called at 0855. Fire crews from Poplar, Millwall, Shadwell, Plaistow, Whitechapel and surrounding fire stations are at the scene.

The cause of the fire is not known at this stage.

But crucially, people have said that the tower had the same flammable cladding as Grenfell.

When your building has the same cladding as Grenfell Tower. Oh my god.

🚨 20 fire engines on the scene of a fire at New Providence Wharf in East London this morning.

The building’s still covered in ACM cladding – the same type as was on Grenfell. Awaiting updates. @LBC pic.twitter.com/vvKaNzxTUW

As did Inside Housing‘s Jack Simpson:

This is absolutely shocking!

Four years since Grenfell and a fire at a block still covered in Grenfell-style ACM.

Videos seem to show that it has spread across the external wall and has affected more than one flat. Beggars belief! https://t.co/6czA469C7K

Also, one local resident claimed that the tower block had “walking fire wardens” for a “couple of weeks” prior to the fire. And as Simpson tweeted, people had known about the potential danger at New Providence Wharf for “over two years”:

I wrote about this block More than two years ago. At the time the developer Ballymore had given leaseholders a two week ultimatum over the costs to remove this dangerous cladding. https://t.co/jmpMiHE5Lq

.@LFBTowerHamlets are working to tackle a fire at New Providence Wharf.

Meanwhile developer Ballymore continue to build & profit in £ms.@ballymore what *action* are you going to take now?

And Venables said that:

work to remove the cladding was due to start THIS week, and finish in March 2022.

The fire comes just days after the government’s post-Grenfell fire safety laws. Campaigners argue they could leave leaseholders paying tens of thousands of pounds to remove cladding on their buildings.

It should shame this government that four years on from Grenfell there are people across the country living in buildings wrapped in flammable cladding. …

The pace of removing flammable cladding has been glacial and it’s putting people’s lives at risk.

So, some people called for a legal class action:

I'd suggest class action. Unfortunately, many organisations have to be dragged kicking and screaming before a judge in order to see their manifest errors. This was avoidable https://t.co/QfQRgb3GMF

We are horrified by the news of the fire at the New Providence Wharf today. When will the government take this scandal seriously? Enough is enough. The Government promised to remove dangerous cladding by June 2020 it has completely failed its own target and every day that goes by lives are at risk. Today more people have lost their homes in another terrifying fire.

The Government needs to treat this as an emergency and stop stonewalling residents who are raising concerns. No more games, no more excuses. We’ve said all along that another tragedy is waiting to happen unless this crisis is dealt with properly and swiftly. Our thoughts are with those affected.