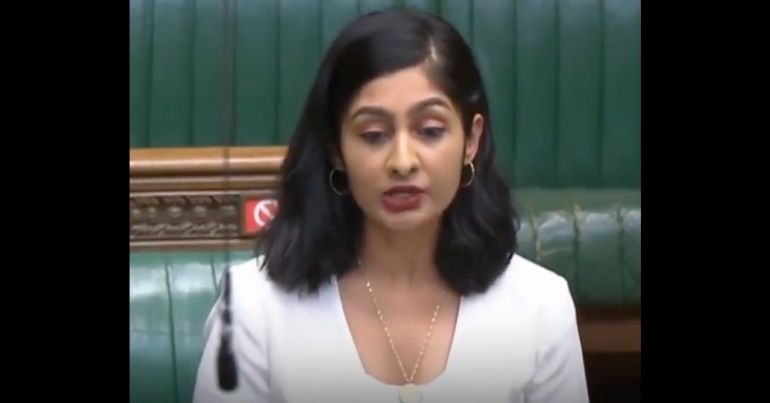 In a House of Commons debate on 14 July about the racist abuse of England footballers in the aftermath of Euro 2020, Coventry South MP Zarah Sultana accused prime minister Boris Johnson and home secretary Priti Patel of “stoking the fire of racism”. Sultana’s accusations included references to Johnson’s column describing Black people as “picaninnies”, and home secretary Priti Patel’s remark stating that footballers taking the knee was simply “gesture politics”. Sultana said that in response, safeguarding minister Victoria Atkins told her to ‘lower her tone’. People took to Twitter to highlight the racism, classism, and misogyny inherent in Atkins’ attempts to silence the young MP.

Sultana’s speech came after England footballer Tyrone Mings called out the home secretary’s ‘pretend disgust’ at the racist treatment of Black players after ‘stoking the fire’ of racism. In her powerful speech, the MP accused the prime minister and home secretary of “stoking the fire of racism” and “giving the green light to racism” in the UK. She highlighted Johnson’s description of “Black people as ‘picaninnies’ with ‘watermelon smiles’” and “Muslim women as ‘letterboxes’ and ‘bank-robbers’”. She also called attention to the prime minister’s refusal to condemn fans who booed England players who took the knee ahead of matches, and the home secretary’s ‘derision’ of their message as “gesture politics”.

I don’t genuinely think the honourable lady is accusing either the prime minister of this country or indeed the home secretary of racism. That would be a truly extraordinary allegation to make.

Some news for Vicky: He's racist.

The only extraordinary thing is denying it.

A classic case of tone policing

People soon took to Twitter to call out Atkins’ racist, classist, misogynistic tone policing of Sultana, a 27-year-old British Pakistani woman who attended what she describes as a “rough” school in Birmingham. Explaining that Atkins’ response is a typical of someone seeking to silence marginalised voices, psychologist Guilaine Kinouani said:

To the untrained eyes, roles would switch and Zarah would have become, the irrational, unthinking, emotional absurd interlocutor/agent. Some of us know better and can clearly see how the white MP is trying to locate the disturbance into Zarah as deflection & distraction.

Victoria Atkins sneering and condescending to Zarah Sultana is so familiar – white women wrap themselves tightly in being softly spoken, measured, gently troubled at racism, calm

racism often comes with a polite veneer – in fact, that's the most British thing I can think of

Imagine telling the only MP of colour present to talk about racism, to "lower the tone."

Highlighting that Patel wasn’t present in the House to take part in the debate, Mark Conway said:

Priti Patel was too cowardly to come and answer questions. So she sent her tone police officer Victoria Atkins. Lovely flare of classist “don’t dare speak like that to me.” pic.twitter.com/SWwwESNekc

This is racial tone policing packaged as a request for civility in Zarah’s place of work. It is deployed to invalidate her voice. It’s unacceptable, it should be called out by fellow workers (in this case MPs across the bench), and it shouldn’t be left to Zarah to self advocate. https://t.co/VH6InwV4bZ

Order in the House?

Sharing a montage video comparing scenes of MPs and ministers shouting and jeering in parliament with Sultana’s clear, measured speech, Russ Khorma responded to Sultana with:

Just for context so that we all know exactly the level that Victoria Atkins was expecting Zarah to 'lower her tone' to…. pic.twitter.com/V2pBfm26lV

Victoria Atkins' response is really offensive – asking Zarah Sultana to "lower the tone" and referring to Sultana's comments as not being "measured" – when Sultana delivered her views calmly and clearly.

Considering this is the space where white men holler and boo. https://t.co/zYeqC9JiA4

Recalling the moment when former health secretary Matt Hancock suggested Labour MP and A&E doctor Rosena Allin-Khan should consider her “tone” in the House of Commons, another Twitter user added:

Today, Victoria Atkins told Zarah Sultana to "lower the tone.” Matt Hancock similarly tone policed Rosena Allin-Khan. Yet, it’s perfectly acceptable for the rest of the house to belch as loud as they wish. This micro-aggression is a way to say, “know your place.” #everydaysexism

Highlighting that respectability politics will not help us to disrupt and dismantle systems of racist oppression, Lauren Corelli shared:

zarah here doing everything right to be “measured” + “respectable” in the eyes of the institution and bureaucrats — and it’s still not enough. the powers that be will never be moved by politeness and calm conversation — they will only ever be moved by force + our collective will. https://t.co/3jZfha8wvK

Atkins’ attempt to derail this urgent conversation is a classic deflection technique. But whether it acknowledges it or not, this government is racist. On 14 July, the Runnymede Trust accused the government of being in breach of numerous human rights obligations under the UN treaty on racial discrimination. In November 2020, an inquiry by the Joint Committee on Human Rights suggested that Black people’s human rights aren’t being respected in the UK.

The government’s own statistics lay bare the structural racism that exists in education, employment, housing, healthcare, policing, the justice system, and beyond. But it felt emboldened to publish a report that denies its existence. In response to the report, the UN accused the government of attempting to “normalise white supremacy”. Once again, the Tories have demonstrated that they have no intention of tackling the racism that is ingrained in our society. That’s why we need bright, bold MPs like Sultana to hold them to account.