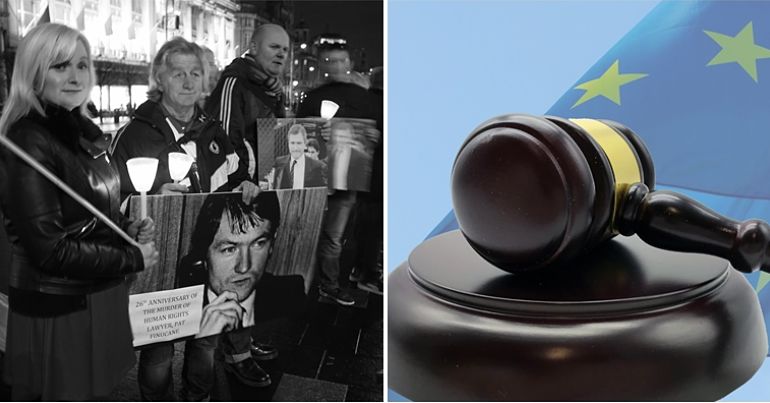 On 31 January, Geraldine Finucane, the widow of murdered human rights solicitor Pat Finucane, moved a step closer to a full public inquiry into her husband’s killing. The High Court granted her permission to challenge the apparent lack of action that followed the Supreme Court’s ruling in February 2019. The Supreme Court ruled that investigations into her husband’s murder had been ineffective.

The Supreme Court also ruled there hadn’t been an “Article 2 compliant inquiry” into Finucane’s death. Article 2 protects everyone’s right to life under the European Convention on Human Rights (ECHR). This article could be a lifeline that gets the Finucane family justice. But this article also offers protection to so many others in UK courts through the UK’s Human Rights Act 1998 (HRA). This is the Act which brings the ECHR into UK law.

The Conservatives attempted to remove it in the past when in coalition but were blocked by the Liberal Democrats. So with a large majority single-party government, it could be under threat again. Because in January 2019, the Conservative Party refused to give assurances it wouldn’t repeal or replace the HRA. For the sake of the Finucane family and so many others seeking justice, it’s vital this never happens.

While the High Court decision is a brief moment to celebrate, it’s also a moment to remember how successive British governments have failed this family. They’ve failed them and their campaign for justice by delaying a full public inquiry into Finucane’s murder. These delays must stop because the Finucane family and the British public have a right to know what role British security forces played in this murder.

Calls for an inquiry and delays

The Finucane family has continuously campaigned for a full inquiry into alleged collusion between the Ulster Defence Association (UDA) and British security forces in Finucane’s murder. Indeed, Judge Peter Cory’s 2003 report into this case called for a public inquiry into events. And despite repeated calls for this inquiry, still, nothing has happened.

Northern Ireland secretary Paul Murphy delayed a public inquiry in 2004 due to an upcoming trial of a man accused of Finucane’s murder. Then, in 2012, former prime minister David Cameron ruled out a public inquiry. And he did so despite a further report – the Lord Desmond de Silva report – confirming state agents were involved in the killing.

The de Silva report said there were “shocking levels” of state collusion. Cameron apologised to the family, but still no inquiry.

And since that time, the British government has done nothing to reverse this. Simply more delays, court appearances, and frustration for the family. So the Finucane family has had to take it upon themselves to push matters further and to get that public inquiry into his murder that’s so badly needed.

As recently as 24 January, the secretary of state for Northern Ireland Julian Smith postponed a meeting with Finucane’s widow. Smith apparently had other commitments that day. It really does look as if this family is being treated with contempt by the British government.

The timing and ‘Brexit day’

The High Court’s ruling came just one day after the 48th anniversary of Bloody Sunday and just before the UK formally left the EU. Since this government has already gone back on pre-election promises, there’s no guarantee it won’t consider repealing or replacing the HRA at a later date.

In responding to the House of Lords EU Justice Sub-Committee, the government said it “is committed to the European Convention on Human Rights”. However, there has been no “concrete commitment”. And a “concrete commitment” is exactly what the Finucanes and all who seek justice in the UK need.