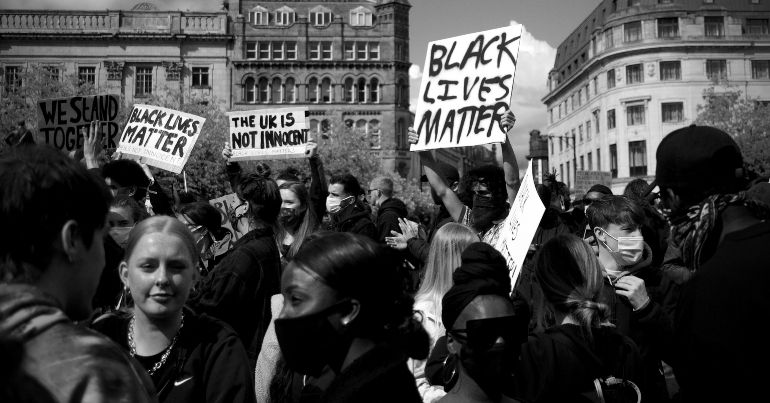 Greater Manchester Race Equality panel chair Elizabeth Cameron told the Guardian that this suggests that officers are falling back on “racist tropes” to explain their excessive and disproportionate use of force against Black people. Manchester police were also more than twice as likely to arrest Black people.

In spite of the overwhelming evidence pointing to institutional racism in the force, the report’s authors fail to acknowledge it. Indeed, the 50-page report refers to the word “racism” once. The Northern Police Monitoring Project (NPMP) highlights that the report refers to the word “in a broad, generic reference to the Black Lives Matter Movement, detached from discussions of policing”.

The report goes on to cautiously suggest that the “biases” of individual officers “may” have an impact on their use of force. This frames racial disproportionality in the force’s policing as a case of a few bad apples. Such framing fails to reflect the reality that the entire force is institutionally racist.

Rather than acknowledging the reality of institutional racism, the report suggests that over-policed communities are to blame for persistent race disparities. It argues that racial disproportionality in GMP’s policing is partly driven by “the concentration of crime and policing in the City of Manchester, where a majority of Black residents of GMP live”. It goes on to argue that Communities of Colour “are more youthful than the White population”. These statements speak volumes of the way in which GMP regards young, Black, and working class communities.

This could serve as further evidence of problems with the force’s outlook and methods, and may go some way in explaining why the force polices certain communities so heavily. Further, as NPMP highlights, crime statistics are subjective. It’s ultimately up to the police and justice system to decide who to police and who to criminalise. Rather than asking interesting questions about why the force feels the need to focus its efforts on certain communities, the report simply reaches these conclusions to further justify the over-policing of under-protected communities, and to dismiss the real and harmful realities of institutionalised racism within the force.

The report’s introduction sets out that “GMP is committed to reinforcing the legitimacy of its practices”. And GMP chief constable Stephen Watson told the Guardian: “I do not accept that GMP is institutionally racist, but I do accept that a lot of people think we are”. This suggests that the report is more focused on optics, rather than acknowledging racism within the force, or bringing about real and lasting changes to its disproportionate policing of certain communities.

The report’s recommendations include commitments to recruiting more officers of colour, publishing data on the use of stop and search and force, and the establishment of a Diversity and Equality Board led by Watson. Highlighting these recommendations, NPMP said:

the report’s recommendations focus less on substantive operational changes than reframing public perceptions of GMP as accountable, representative, and transparent.

These are recommendations designed to address perceptions of racial disproportionality not ‘achieve racial equality’ as the report claims.

Over-policed and under-protected communities don’t need a report to tell them that policing in Manchester is disproportionate. They need real commitments and solutions that tackle the issue of excessive and disproportionate policing head on. The force can’t claim to be trying to ‘achieve racial equality’ if it refuses to acknowledge the existence of institutional racism.