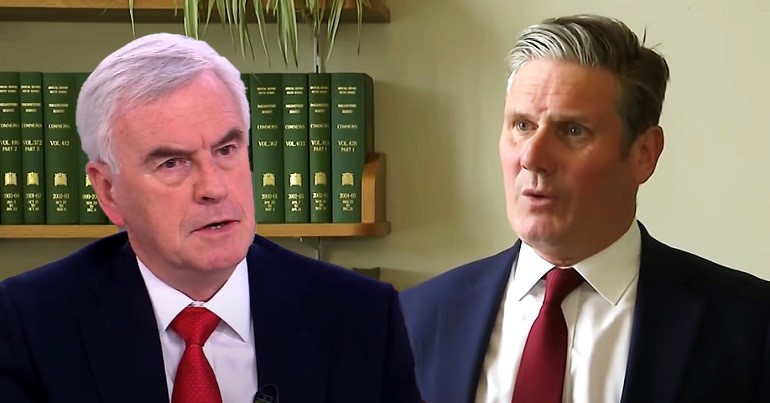 The Labour group led by John McDonnell has issued a furious statement over the party’s banning of four left-wing groups. It also takes aim at Keir Starmer directly – saying he has brought the party “almost to its knees”.

As The Canary previously reported, Labour has banned four groups:

A Labour source said at the time that the party banned them because the groups’ values weren’t “compatible” with Labour’s. SKWAWKBOX noted that the banning of these groups would make:

Labour’s National Executive Committee (NEC) voted to ban the groups on Tuesday 20 July. At the same time, people protested the decision outside Labour HQ. As Terry Deans from LIEN told The Canary:

Now, McDonnell’s group has got involved.

The Labour Representation Committee (LRC) began in 1900, but its current incarnation dates back to 2004. It says its aim is:

to fight for power within the Labour Party and trade unions and to appeal to the tens of thousands who, during the Tony Blair years, turned away from our party in disillusion and despair.

McDonnell is its president, and the Fire Brigades Union’s Matt Wrack is the chair. On 27 July, it weighed in on the banning of the four groups. The LRC’s statement condemns the move “in the strongest terms”, adding:

Starmer promised in his leadership bid to bring unity to the party. He spoke of fighting for the underdog and of his track record in defending human rights. There can no longer be any doubt that this was simply a means to gain control of our party.

You can read the full LRC statement here. It criticises Starmer ‘upsetting’ “loyal voters”; it takes aim at the state of the party’s finances, and asserts:

The establishment wing of the party has declared war on the membership – and, in particular, the left of the party.

The LRC is clear on what needs to happen:

We need to unite and resist. The future of our party is at stake. That’s why the LRC is part of Defend the Left and is working to get trade union branches and local Labour lefts to sign up to it.

Defend the Left is a campaign to stop Labour’s purge of the left. It has a petition which you can sign here. The group says that it urges:

everyone who wants to build a united, fighting opposition to the Tories to join together against the attempt by the right to reintroduce a list of proscribed organisations. No doubt, other socialist groups will be added to the list, should this first round of proscriptions go through without a hitch.

‘No one is safe’ from the purge

As the LRC sums up:

This is already the thick end of the wedge – no one who defends socialist ideas is safe unless we act together.

So, is Starmer’s ongoing purge the end of the left of the Labour Party? Clearly not if McDonnell and countless others have anything to do with it.