Nurses have expressed their “utter dismay” at the government’s proposed 3% pay increase. And they’ve described the offer as “a big kick in the teeth”.

NHS staff claim they’re dealing with a “massive haemorrhage” of workers following the pandemic and said the proposal was insulting.

Hundreds of medical workers, both past and present, took to the streets on Friday 31 July. And they marched to Downing Street to protest the deal.

Demonstrators gathered outside St Thomas’ hospital in central London before making their way across Westminster bridge to Whitehall.

They called for the prime minister to listen to their concerns. Some held banners with slogans saying “Save our NHS from the Tories”. 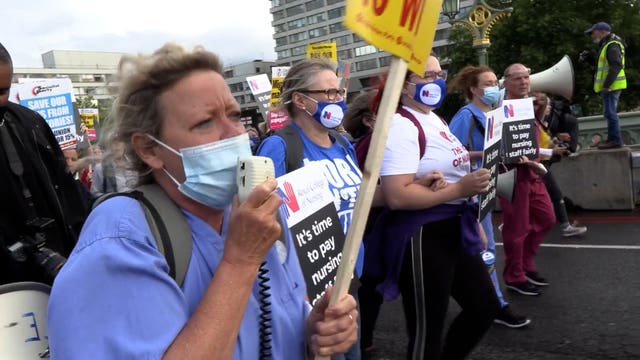 ‘A big kick in the teeth’

Nurse Janet Maiden described the pay increase as “not significant enough” and the resulting staff shortages as “criminal”. Speaking outside Downing Street, she told the PA news agency:

I think people naively thought, especially when they saw Boris Johnson naming the nurses who cared for him … that he might change his mind, so, yes, it is a real insult.

Three per cent is not significant enough for us, I’m afraid.

People are voting with their feet and leaving the health service, and that’s criminal.

I was in utter dismay, we’re dealing with a massive haemorrhage of staff from the NHS, huge vacancies among nurses and other grades of staff.

Three per cent is not going to rectify the historic crisis of staffing inside the NHS.

Personally, I felt kicked in the teeth, I felt insulted after what we’ve done with both waves of Covid to be offered 3%, I found it really depressing.

It took the wind out of my sails and made me sad.

“Get your finger out,” Boris Johnson

Others called on the prime minister to take further action following the proposal announcements.

Get your finger out and listen to the people and do what you are supposed to be doing.

You’re currently out on your jollies, having your summer holidays and people in this country are continually dying because of policy decisions you have made.

Get round a table, listen to people in parliament and correct some of the lies made at the despatch box.