Asda's 'disability discrimination' is not an isolated problem - Canary 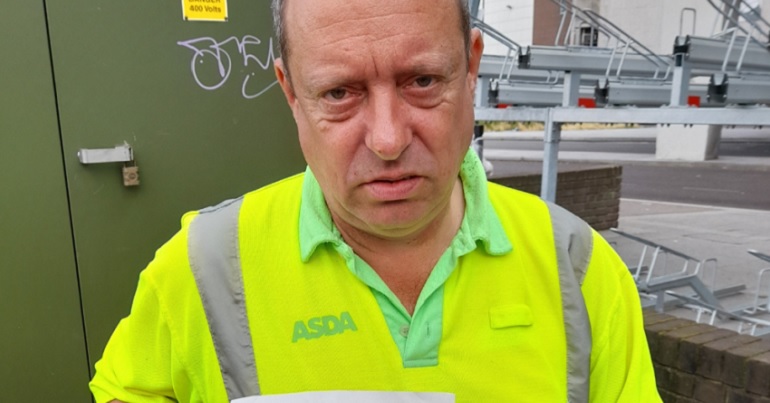 ASDA is still in the firing line over its sacking of a disabled worker. So far the corporate giant isn’t backing down. But the situation represents a growing problem for chronically ill and disabled people who work.

ASDA: in the firing line

As Essex Live first reported, ASDA sacked Mark Misell from its Shoeburyness store. It claimed this was because he was smoking in a place he shouldn’t have been. Misell had worked for ASDA for 30 years. He lives with learning difficulties. These mean he cannot read or write. But even after decades of service, ASDA chose to fire him for what appears to be his first offence.

ASDA decided that Misell’s actions were gross misconduct. It then fired him without notice. The Mirror reported that ASDA:

caught [Misell] having a cigarette in a trolley bay while at work on May 25 this year.

But [Misell] – who can’t read or write – claims he didn’t understand the store’s policy on smoking in the car park due to his learning difficulties.

He could now face homelessness because of ASDA’s decision. So, the GMB Union has got involved.

It said that Misell was a car park porter. The GMB Union said in a press release that he:

was proud to go to work so that he could assist customers.

On the day in question, [Misell] chose to have a cigarette within the car park so that he did not have to stop his work and walk to the designated smoking shelter.

Throughout the farcical disciplinary process, ASDA’s management incorrectly claimed that the allegation was a breach of the law and that [Misell’s] learning difficulties and inability to read and write had no bearing upon the matter.

ASDA must adhere to the Equality Act 2010 and start to make reasonable adjustments for employees with disabilities.

ASDA, who have previously signed up for the government’s Disability Confident scheme which makes the most of the opportunity by employing disabled people should be ashamed of their actions…

GMB London Region have passed this matter onto our legal teams to bring to an employment tribunal so that justice can be achieved for [Misell].

But the story shows a wider problem for chronically ill and disabled people in England.

As Disability Rights UK wrote, in July 2013 the government brought in fees for people wanting to take employers to a tribunal. It noted that after the government introduced these:

So, Misell’s case is not an isolated incident.

Asda: a “revolving door” of discrimination?

For example, Dixon noted that:

ASDA appear to be operating a revolving door scenario where those with disabilities are pushed out of the business to be replaced by non-disabled colleagues.

Gone are the days when ASDA would respect their workforce and support those with disabilities.

It is becoming common practice for colleagues with disabilities to be challenged upon their work rate, work speed or matters to which they have no control.

But as the Mirror reported, Misell feels that ASDA has discriminated against him. He said the boss that fired him:

has made assumptions about my understanding of policy, and my mental health, where he could not have been able to do so, and that this led to him making the wrong decision as an outcome to the disciplinary.

Sadly, Misell’s cases is one of thousands every year in England. The fact that disability discrimination is barely less widespread than it was almost a decade ago, shows that something is still very wrong with the way employers treat chronically ill and disabled people.