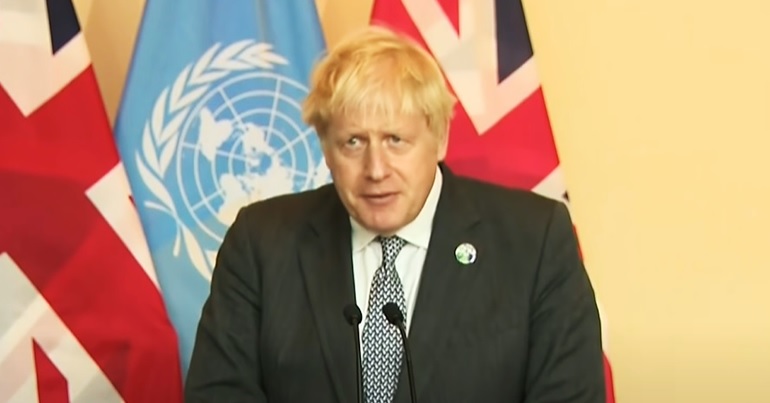 Boris Johnson scolded rich countries at the United Nations on 20 September. He told them that “the world will see, and your people will remember, and history will judge” if they don’t step up to tackle the climate crisis. The PM is also scheduled to admonish humanity at large at the UN General Assembly on 22 September. He will apparently tell the human world that it needs to “grow up” and take responsibility for “for the destruction we are doing”.

Unfortunately for Johnson, back at home his ministers are busy doing the opposite of what his rhetoric demands. Rather than stepping up to tackle the climate crisis, home secretary Priti Patel and transport secretary Grant Shapps have instead been taking action against people engaged in climate protests.

According to the Climate Change Committee (CCC), 14% of the UK’s greenhouse gas emissions come from energy use in its 29m homes. The committee asserts that the country cannot meet its climate change targets without eliminating the vast majority of these emissions. However, the UK is almost at the bottom of the pile when it comes to installing greener heating in homes among European countries. Greenpeace UK’s policy director Doug Parr explained:

The UK already has the draughtiest homes in western Europe, now we’re last when it comes to clean heating too. We perform better in Eurovision than we do decarbonising our homes, and that’s saying something.

A protest group called Insulate Britain has taken the government to task over inaction on tackling these emissions. It’s been disrupting traffic on motorways for a number of days. The group’s actions have been met with both praise and criticism.

Insulate Britain wrote to Patel on 20 September calling for a show of climate leadership from the government. It apologised for the disruption caused by its actions, but said:

The collapse of the climate is happening around us, and will soon get worse unless we immediately reduce carbon emissions.

The group ‘pleaded’ with Patel to demonstrate leadership by asking the PM to:

make the statement the country wants to hear – that the government will live up to its responsibilities to protect us. That it will take the lead needed to insulate and retrofit our homes.

Rather than acknowledging and accepting the group’s demand, however, Patel has chosen to try and quash the protests. She and Shapps sought a court injunction to criminalise the direct action. According to Shapps, they’ve been successful:

Invading a motorway is reckless & puts lives at risk. I asked National Highways to seek an injunction against M25 protestors which a judge granted last night. Effective later today, activists will face contempt of court with possible imprisonment if they flout.

In his UN speech on 22 September, Johnson is planning to compare humanity to a child who needs to learn and mature in the face of climate breakdown. He’ll warn that “the adolescence of humanity is coming to an end”. But the adolescence of humans in the UK couldn’t be more apparent right now – particularly within its elite circles.

Government ministers throw their toys out of the pram and dig their heels in when faced with direct action. Guests and commentators on national TV ridicule and insult the protestors. And Johnson himself dreams up and talks of a make-believe world where his country is a climate hero.

Much of the human world does indeed need to ‘grow up’ and take responsibility – and action – on the climate crisis. The humans running the show in the UK are right up there on that list.