Despite the Downing Street party scandal, Labour still managed to shame itself - Canary 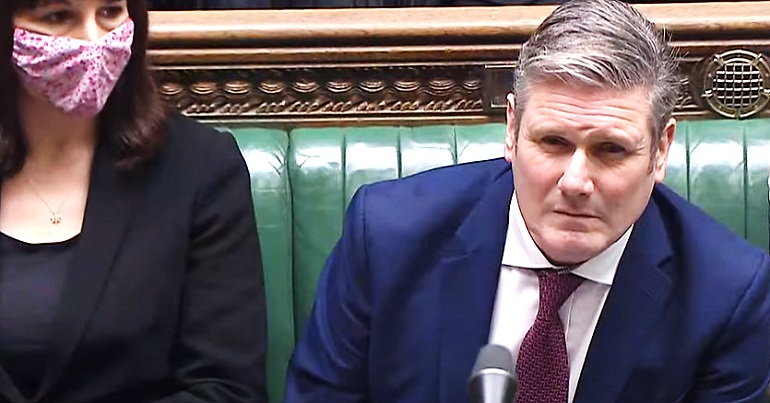 The scandal over Downing Street partying while the rest of us were under coronavirus (Covid-19) restrictions is rumbling on. So, you’d think that Keir Starmer’s Labour would want to shame Boris Johnson’s team at every opportunity. But that’s not the case. Because a vote in parliament managed to shame Labour itself.

The welfare cap is a limit the government is allowed to spend on social security. FYI – it’s not the same as the so-called benefit cap, which limits how much the Department for Work and Pensions (DWP) can give a household. On Monday 10 January, there was a parliamentary vote to keep the cap in place and set it at a certain level, and most Labour MPs abstained. This caused uproar among many people, because the welfare cap affects millions of people.

In 2014, the Tory-Lib Dem coalition government introduced the welfare cap. It was part of its Charter for Budget Responsibility. This is a government document saying how much it can spend.

Every so often, parliament reviews the welfare cap. For example, as a House of Commons briefing paper said:

The cap is only formally assessed at the first Budget or first fiscal update of each new Parliament.

The current welfare cap was set in the Spring Budget 2020, and the Treasury said it would apply until 2024/25. It set it at £137.2bn. The Treasury also said this was with a margin of 3%. That is, the government could spend 3% extra or less on either side of £137.2bn. During 2021’s Autumn Budget, however, the Tories said they would be changing the welfare cap again.

The government has now increased the amount it can spend on social security. The figure is set at £138.3bn, with a margin of 2%. This is a £1.1bn increase, or 0.8%. On the face of it, it seems that the Tories have increased social security spending. But in reality, this is not really the case. For example, when you factor in inflation (the cost of everything we buy), it wipes the Tories’ welfare cap increase out, because Consumer Prices Index inflation rose by 4.6% in the 12 months to November 2021 alone.

Then, you also have the fact that due to the pandemic and changes to DWP policy, there are more people claiming social security. For example, the number of people claiming Universal Credit more than doubled between February 2020 and May 2021. And as of October 2021, this figure had barely changed. So, the 0.8% increase in spending may not even cover that.

The cap also means that if there is a continued increase in social security claimants, the government doesn’t have to increase the welfare budget accordingly. This may inevitably lead to reduced benefit rates for claimants

Get out of jail free card

Within the welfare cap update was a change to how it works. And it’s one that’s potentially more worrying.

The Tory government has updated the terms of the Charter of Budget Responsibility. In it, it has a ‘get out’ clause for the welfare cap. In short, if there is what the government calls a “negative shock” to the economy, it doesn’t have to stick to the welfare cap. That is, if there’s a financial crash (or the pandemic worsens), the Tories can cut spending on social security to below the cap. And while the Tories could use this to increase welfare spending, the party’s track record makes this highly unlikely.

Despite this, most Labour MPs thought it was okay to abstain on 10 January’s vote.

Of course, even if the Labour MPs had voted against the cap, the Tories would still have won. But that’s not really the point. It sends out the message that Labour isn’t fully against the welfare cap. Or, as one SNP MP told the National:

As the UK faces a Tory-made cost-of-living crisis, it is the duty of the opposition to fight for those being directly affected. However, yet again, the Labour Party are posted missing and continue to let down the UK’s working class.

Starmer’s party was completely on the wrong side of the argument here. So, even when the Tory government is under huge pressure, Labour still manages to look uncaring and ‘Tory-lite’. Shameful.