Seven years after Sheku Bayoh's death at the hands of police, his family will hear what really happened - Canary 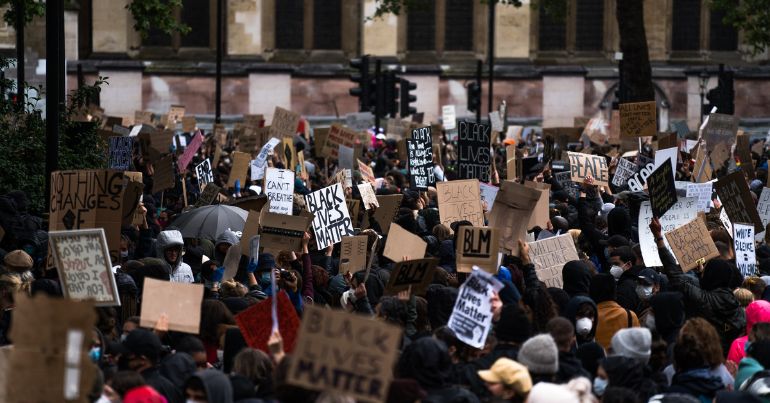 On 3 May 2015, 31-year-old father of two Sheku Bayoh died after being restrained by police in Kirkcaldy, Scotland. Seven years later, the public inquiry into his death is due to begin on 10 May. This comes after his family’s drawn out battle for truth, justice, and accountability.

Death at the hands of Scottish police

On 3 May 2015, Kirkcaldy police officers responded to a call saying that a Black man was walking down the street with a knife and acting erratically. When officers arrived at the scene, Bayoh appeared to be walking away. He was unarmed and officers found no knife on him.

Within 46 seconds of arriving, the officers had Bayoh face down on the ground. Two officers allegedly placed their full body weight on Bayoh’s upper body. They used CS spray – a gas used to incapacitate people – and batons, and shackled him in handcuffs, leg restraints, and ankle restraints. He lost consciousness, but officers kept the handcuffs and restraints in place. He died in hospital an hour and a half later.

A post-mortem found injuries on Bayoh’s face, bruises on his body, and a broken rib.

No truth, no accountability

The Police Investigations and Review Commissioner (PIRC) investigation into the circumstances surrounding Bayoh’s death concluded in 2018. The Lord Advocate decided that no criminal, corporate or health and safety charges would be brought against the officers involved. However, footage later emerged that appeared to contradict the police accounts of the event.

According to the Bayoh family’s lawyer Aamer Anwar:

The family publicly condemned the PIRC investigators, believing that their inquiry lacked robustness, transparency, or impartiality.

In 2019, the bereaved family submitted a request for a review of this decision.

The Scottish government announced a public inquiry into the events surrounding Bayoh’s death in November 2019. This announcement came after pressure from Bayoh’s family, their lawyer, and INQUEST – a charity that seeks justice for the victims of state violence in the UK.

Indeed, the difficult seven years it has taken for Bayoh’s family to secure a public inquiry reflects the barriers to truth and accountability that bereaved families face when seeking justice for their loved ones.

I think what the delay points to is the fundamental problem with the way in which deaths at the hands of the police are investigated in Scotland. And I think it’s exposed the failings of the investigation process, particularly the role of the PIRC, which has really compounded and exacerbated the trauma of the family.

Speaking to the bereaved family’s inability to grieve until they know the truth about Bayoh’s death, she added:

They’ve been faced by a deeply dysfunctional process that has been protracted, has placed obstacles in their way from day one, resulting in us having to campaign to try and get a public inquiry set up.

The public inquiry will examine the circumstances surrounding Bayoh’s death, and the subsequent investigation.

It will also seek to determine “whether race was a factor” in the police’s response. This was included in the inquiry’s terms of reference following pressure from INQUEST and others.

INQUEST included Bayoh’s case as evidence of systemic racism in UK law enforcement in its submission to the United Nations High Commissioner for Human Rights report following the murder of George Floyd in 2020. It placed his death in the context of vast racial disparities in stop and search, police use of force, and deaths in police custody due to “structural racism, over-policing and criminalisation”.

Calling this a “seminal moment” in terms of police accountability in the UK, Coles told The Canary:

It’s important that people wake up to the reality of what the police do, and that continuum of disproportionality in terms of stop and search, in terms of criminalisation, imprisonment, and then in the context of our work on deaths in custody.

it’s significant also for Scotland, a country that that talks about human rights a lot. I think this is a particularly important inquiry to look at human rights, racial justice, and equality issues. […] It’s a test of the Scottish government’s commitment to human rights, and the rule of law applying to police officers, which we see all too often doesn’t apply.

Indeed, in 2021, Benjamin Monk was the first officer to be convicted for manslaughter in England and Wales in 35 years. However, there have been 1,816 deaths in police custody here since 1990. Black and racialised people are overrepresented in these figures. Meanwhile, Police Scotland doesn’t even routinely record data on the ethnicity of people killed in custody.

Solidarity with the Bayoh family

The public inquiry is due to begin on Tuesday 10 May in Edinburgh, seven years after Bayoh’s death at the hands of police. It is expected to go on for two years.

As the public inquiry begins, we reaffirm our support for the Justice for Sheku Bayoh Campaign.

For seven years his family, supporters and our movement have fought to uncover the facts about Sheku’s death. We offer our firm and full solidarity to those who continue to be impacted by his passing in their courageous pursuit of the truth. Without it, we cannot ever hope for justice nor peace.

She wants people to remember him as a bright young man who any parent would have been proud of. He was a wonderful son, a wonderful brother and uncle, a loving partner to Colette and a loving father to two young boys who will now grow up without a father.

Bayoh’s loved ones are holding a vigil in Edinburgh to mark the beginning of the inquiry at 9am on Tuesday 10 May. They are asking supporters to show up in solidarity, and to remember the life of a man who meant the world to his family.

The dead cannot cry out for justice, but it is the duty of the living to do so for them.

We must send a loud, clear message that police can’t kill our friends, neighbours, and family members with impunity.