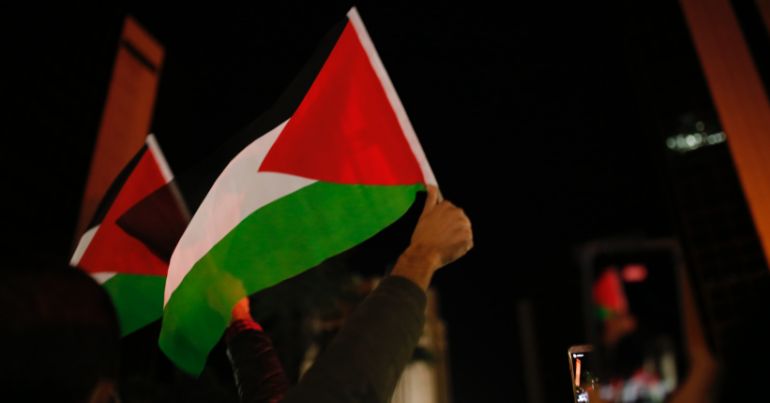 Palestinian societies (PalSoc) at universities nationwide have issued an open letter condemning the “smear campaign” against incoming National Union of Students (NUS) president Shaima Dallali. They are also urging the NUS to call off its investigation into allegations of antisemitism against Dallali.

On 13 April, the NUS announced plans to open an investigation into allegations of antisemitism against the union and Dallali, who is due to take up her post in July. This was in response to an onslaught of complaints by the Union of Jewish Students (UJS), some former NUS presidents and political figures following Dallali’s election.

The issues raised included a comment Dallali made as a teenager, which she apologised for. She also welcomed the NUS investigation, and reaffirmed her commitment to working in solidarity with Jewish students.

However, the coalition of Palestinian societies argues that the backlash against Dallali’s election is due to her condemnation of Israeli apartheid and settler-colonialism, which human rights body Amnesty International has called “a crime against humanity”.

A coalition of PalSocs from universities across the UK have issued an open letter in solidarity with the union’s incoming elected president, saying:

We reject the smear campaign and harassment of Shaima Dallali and wish to make it clear that Shaima, as a dedicated and committed anti-racist organiser, has our full confidence to fulfil her duties as NUS President.

Underlining the danger and inaccuracy of conflating anti-Zionism with antisemitism, the coalition states:

the liberation of Palestine is not at odds with the safety of Jewish students in the UK.

Fears for her safety

In April, Dallali – a young Black Muslim woman – spoke out about being subjected to racist and Islamophobic abuse online as a result of the pile-on. Violent threats resulted in the young activist fearing for her safety, and harmed her mental and physical wellbeing.

Unfortunately, as a black Muslim woman, it is something that I expected because I’ve seen it happen to other black Muslim women when they take up positions in the student union or the NUS, where they are attacked based on their political beliefs or their pro-Palestinian stance.

Indeed, Malia Bouattia faced similar backlash in 2016. Bouattia was the first Black Muslim woman to become NUS president, and was vocal about her pro-Palestinian stance

To continue with this investigation into a President who has continuously been outspoken on Israeli Apartheid is a direct decision to exclude those who stand for justice in Palestine and to ignore the grave concerns that Shaima Dallali has over her own personal safety and wellbeing.

Questioning the veracity of the UJS’ statement against Dallali, the PalSoc coalition highlights claims that a number of its signatories didn’t actually sign the letter, and don’t endorse its message. It also points to an open letter written by Jewish students denouncing the UJS’ response to Dallali’s election, stating that its views don’t represent the UK’s entire Jewish student body.

The letter in support of Dallali states that launching an investigation based on an unreliable source such as this “sets a deeply troubling precedent”.

Furthermore, the Palestine solidarity coalition calls out the “hypocrisy” of the UJS’ “call for inclusion” while openly endorsing and defending Israeli settler-colonialism, and promoting inflammatory, Islamophobic views.

Quite simply, the UJS’ position to promote Zionism and claim to oppose racism is an untenable stance.

The open letter defending Dallali also calls attention to the fact that university campuses are increasingly unsafe places for those who condemn Israeli apartheid, occupation, and genocide.

Reflecting on this, the group says:

Investigations launched across UK universities against students and academics have intensified a culture of surveillance, which combined with the expansive presence of the Prevent agenda within education, seeks to silence our voices against global injustices.

Meanwhile, the UK government is trying to make boycott, divestment, and sanctions (BDS) – a tactic once used against South African apartheid – illegal.

In April, former prime minister David Cameron praised an Islamophobic report targeting Muslim activists who oppose Prevent – the UK’s discriminatory counterterrorism policy. The policing bill – which is now law – will usher in further securitisation of university campuses. This will no doubt disproportionately harm marginalised students, particularly those who take a stand against injustices.

the NUS has been routinely silent when students have most needed support from institutions that claim to stand for equality, freedom of speech and anti-racism.

An NUS that cannot protect its own President from the external pressures of groups who openly side with Apartheid is an NUS that has failed those who it seeks to represent.

The coalition invites student societies to sign the open letter in support of its statement urging the NUS to call off the investigation, saying:

We believe firmly in tackling all forms of discrimination and racism through a united front and call all student societies to support us in challenging an increased dependence on a culture of investigations and surveillance.

If the NUS seeks to live its anti-racist values, it must take a stand against Islamophobia, white supremacy, settler-colonialism, and apartheid, and also must support students who vocally defend Palestinians’ right to live free from Israeli occupation.