A grueling month for deer, as weak rules allow hunting terror to reign - The Canary 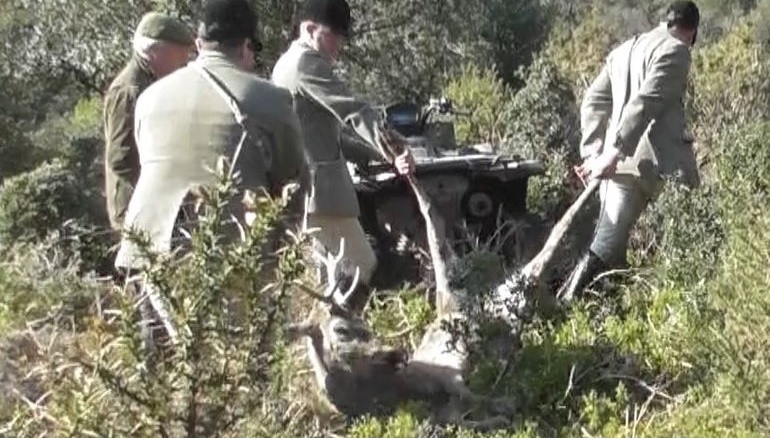 Update: This article was updated at 15.03 on 09/05 to include comments received post-publication from the Quantock Hills AONB Service.

Between March and July, anyone appreciating wildlife with their dog on Somerset’s Quantock Hills must have the latter on a lead. This rule aims to limit harm by dogs to ground-nesting birds, lambs, and baby deer on open access land. Hunt saboteurs say that in practice, though, there’s an exception for some people.

What about the Quantock Staghounds hounds? Why are they exempt from disturbing the nests?

Apparently, if you’re heading to the hills with dogs to terrorise and ultimately end wild lives with a bullet, the rule doesn’t apply to you.

Killing week in, week out

The North Dorset Hunt Saboteurs (NDHS) chronicled the actions of the Quantock Staghounds throughout April. This is one of three staghound groups in England, all of which operate in the South-West.

According to Keep the Ban, hunt monitors reported that the Quantock Staghounds killed three stags (male deer) between 28 March and 25 April. A report from NDHS, in collaboration with an independent monitor, said that the staghound group killed again on 28 April on its “closing meet” of the season:

The Quantock Staghounds sending 3 dogs to chase a stag on @ForestryEngland land. Their smokescreen "exemption", Research and Observation, only permits 2. pic.twitter.com/k2TfG5gDpk

Responding to NDHS’ monitoring of a stag killing on 25 April, a Hunt Saboteurs Association spokesperson explained:

The disgusting scenes captured by courageous North Dorset sabs are being repeated across the southwest week in, week out. There are three stag hunts and at least two buck hunts – who target roe deer – in the area. Each of these hunts rides out several times a week hunting down deer and intimidating anyone who disagrees with them. They need to be stopped.

As the frequently asked questions page on the Quantock Hills website illustrates, many are surprised to see groups pursuing and killing wildlife on the “Area of Outstanding Natural Beauty” (AONB). The fact that they may witness the Quantock Staghounds, with leash-less dogs in tow, partly explains this bewilderment. As a video on the hills’ Twitter account highlights, it’s a legal requirement for people to keep dogs on leads on open access land between March and July:

It is a legal requirement to keep your dogs on a lead on open access land between 1st March and 31st July. Please keep dogs on a short lead to avoid disturbing ground nesting birds and help protect Ewes and lambs.#groundnestingbirds 🐦#lambingseason 🐑#dogsonleads 🦮 pic.twitter.com/x2POMJXKVl

A sab from NDHS said it was baffling that the Quantock Staghounds are “allowed over the hills where vulnerable ground nesting birds are currently”. The Canary contacted the Quantock Hills AONB Service to ask why the legal rule regarding leads for dogs doesn’t appear to be applied to the staghounds. The AONB manager, Iain Porter, said:

The activity of Exempt Hunting is a legal activity and able to happen where hunt organisations have landowner permission.

I am not aware of impacts of Exempt Hunting on ground nesting birds. This is not to say there is none, but I have not seen any research or studies specific to this activity. I would be keen for wider research to be undertaken in impact of dogs on ground nesting birds, reptiles and invertebrates on open access land that can be used as evidence to direct future behaviours and management.

Porter added that dog attacks on sheep and lambs have increased on Common Land since the Covid-19 restrictions have lifted, with “dog worrying” up by 60% in 2021.

“In reality hunting is not banned”

Another reason why people may be astonished to witness the staghounds killing wildlife is the 2004 Hunting Act. It’s supposed to prohibit people hunting wild mammals with dogs, with some limited exceptions. The Quantock Hills website says the exemptions mean that “in reality hunting is not banned”. 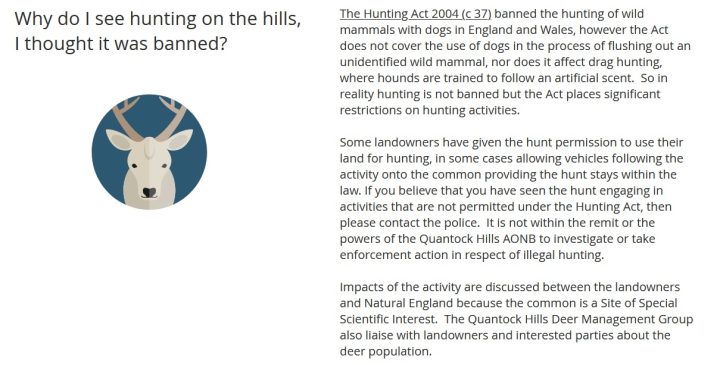 However, exempt hunting comes with conditions that those doing it have to fulfil, otherwise it remains unlawful. For example, as the Times reported, people can use two dogs to stalk or flush out certain animals. This would be to avoid the latter causing serious damage, for meat, or for ‘field trials’. They must also have permission from the landowner and take “reasonable steps” to ensure that they kill their target “as soon as possible”. Other exemptions include that the targeted animal must be wounded or the subject of “research and observation“.

Hunts regularly faced accusations of exploiting exempt loopholes to carry on their ‘sport’ regardless of the hunting ban. The NDHS sab told The Canary that:

From the perspective of the suffering of the deer it is no less than before the ban. They are hunted to complete exhaustion before being shot.

The research and observation exemption is a case in point. As zoologist Jordi Casamitjana told The Canary in 2018, parliament clearly added this exemption to stop scientists being affected by the ban when doing research. But as the ban didn’t stipulate that the condition only applies to scientists, hunting groups utilise it.

This appears, for example, to be the case for the Quantock Staghounds killing of a stag on 25 April.

UPDATED VIDEO The Quantock Staghounds killed an exhausted and terrified stag on Monday after chasing him for hours over the hills. They claim it was for purposes of "research and observation", another smokescreen to enable illegal hunting pic.twitter.com/Ma5iYRzAEj

The NDHS said this hunt lasted six hours, after which the stag hid in the gorse because he “couldn’t run anymore”. After shooting the exhausted individual, NDHS said the staghounds told monitors “they were going to take blood samples”, indicating that the hunt was utilising the research exemption for this kill. The sab added that, by that point, they “could clearly see the stag’s throat had been cut and the body bled”. This is part of the ritual in traditional hunting to prepare the deer for being dismembered, known as the ‘carve up’.

The Canary contacted both DEFRA and the Countryside Alliance about such research by hunts. We asked what oversight was in place to ensure they are using this exemption legitimately. Neither responded to our request for comment.

Aside from restrictions in the Hunting Act, landowners and managers can also restrict the activities of hunts. On the Quantock Hills, these include the National Trust and Forestry England. NDHS highlighted that the League Against Cruel Sports (LACS) also runs “several” sanctuaries there. The sab group said the Quantock Staghounds aren’t allowed to hunt on any of this land, but that it did so, on Forestry England land specifically, on both 25 April and 28 April.

The Quantock Staghounds do not have permission to access land we manage in the Quantock Hills beyond recreational horse riding like any other member of the public. If anyone believes they have witnessed a crime, we urge them to contact the police online or by calling 101 with credible and verifiable evidence including photos or videos. Similarly, if someone has compelling evidence of unauthorised access to land we manage we would like to see it.

In its report from 28 April, the NDHS said that monitors did report the staghounds to the local Forestry Commission (FC) office, which sponsors Forestry England. According to the report, the FC operative indicated it was the second time the hunt’s activities had come into question that day.

As the NDHS’s reports from April show, despite the hunting ban and its restrictions – along with further restraints imposed by landowners and management authorities – deer on the Quantock Hills continue to be terrorised by hunts. The same is true for deer elsewhere, along with foxes, mink, and hares. And there are other victims of hunting too, such as badgers. Their homes are illegally interfered with to facilitate some hunting, according to the LACS.

As the High Court indicated in a ruling on the definition of hunting in 2009, the Hunting Act’s “aim” is “preventing or reducing unnecessary suffering to wild mammals”. This is based on the “moral viewpoint” that “causing suffering to animals for sport is unethical and should, so far as practicable and proportionate, be stopped”.

Clearly, the Act has so far failed on its own terms. For the authorities to make good on the act’s aims, they must heed the multitude of calls from people and organisations to strengthen it.