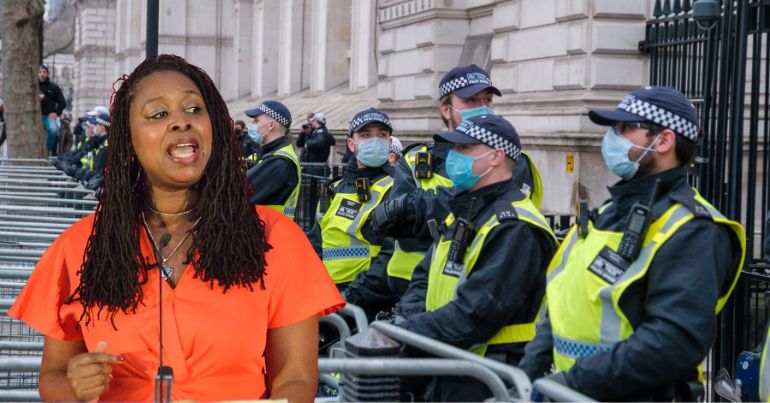 Labour MP for Brent Dawn Butler has revealed that House of Commons officials threatened her with police if she didn’t leave the building. This was after the speaker removed her from the chamber in 2021. Her treatment reflects the racist, misogynistic treatment of women of colour MPs at the heart of government.

In July 2021, Butler told MPs that prime minister Boris Johnson had “lied to the House and the country over and over again” throughout the coronavirus (COVID-19) pandemic.

Temporary deputy speaker Judith Cummins ordered Butler to leave the House of Commons after the MP refused to apologise for her comments.

In an interview that the BBC is due to air on Sunday 19 June, the MP told BBC 1Xtra‘s Richie Brave:

When I got thrown out, I thought that was it. I was going to get myself a drink in one of the many bars in parliament because I was a bit shaky.

And then I got approached and I was told I needed to leave parliament now, and they said ‘are you going to leave now or do we need to get the police to escort you off the premises?

Butler has experienced racist over-policing firsthand in the streets and in parliament. For example, Met Police allegedly racially profiled the MP and a friend in an August 2020 car stop. And according to Butler, a police officer once physically removed her from a tea room in parliament.

No support from Labour ‘comrades’

In the BBC interview, Butler added that fellow Labour members failed to support her following the incident.

Indeed, although Labour leader Keir Starmer agreed with Butler, stating that the prime minister is “the master of untruths and half-truths”, he also stated that the deputy speaker was right to eject the MP from the Commons.

People in my own party were ready to disown me […] because I broke Parliamentary rules. It’s like they didn’t feel proud of me that I was brave enough to call the prime minister a liar.

The people who I expected a phone call from to say ‘Dawn we’ve got your back’… no it didn’t happen. And I got a lot of abuse as well.

This speaks to the lack of support and antagonism that women of colour MPs face from within their own ranks. For example, it was a group of Labour MPs who started the hashtag #PrayForDiane to mock Britain’s first ever Black female MP Diane Abbott while she was ill.

Incidents such as this show that women of colour can’t even rely on the support of those who are supposed to be allies.

Racism and misogyny at the heart of British government

Butler’s experience reflects the routine racism and misogyny that women of colour MPs experience while carrying out their duties in parliament.

Indeed, a 2020 ITV investigation found that most MPs of colour have experienced racism during their time in parliament, with over half experiencing racism directly from other MPs.

For example, Labour MP for Hampstead and Kilburn Tulip Siddiq told ITV that someone advised her to run for parliament using her white husband’s surname because:

And for years, Labour MP for Hackney North Diane Abbott has spoken out about the racist and misogynistic abuse she has experienced from online trolls and from fellow politicians.

Despite their widely documented lived experiences, no Black MPs were initially chosen to take part in an emergency House of Commons debate about racist online abuse. The Commons speaker only invited two Black MPs to take part in the debate after shadow secretary for women and equalities Marsha de Cordova expressed her ‘disappointment’ at having not been selected.

In December 2021, Tory MPs argued against proposals to introduce a new parliamentary behaviour code to protect members against racism and misogyny.

All this shows that parliament regards calling out the country’s elected leader for his consistent, dangerous lies to be a far greater crime than the racist and misogynistic treatment of marginalised MPs who stand for truth and justice.

This country needs more fearless, outspoken politicians like Dawn Butler to challenge the Tories’ discriminatory, fascist agenda and Labour’s politics of ‘sitting on the fence’. But as things stand, the next generation of potential MPs will be put off from entering the elitist, misogynistic and racist Houses of Parliament. Maintaining a hostile environment for those who would seek to represent people from minority communities only serves to marginalise them further.