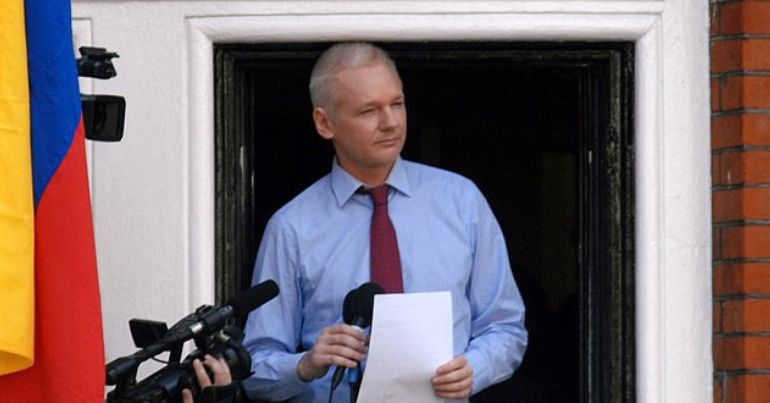 Home secretary Priti Patel has approved the US extradition request for journalist and Wikileaks editor Julian Assange. The Australian national, whose work on massive Iraq and Afghanistan war leaks earned him the ire of Western leaders, has been held in Belmarsh prison since 2019. Before that, he had been living in the the Ecuadorian Embassy in London since 2012.

Press organisations and allies of Assange called the decision a dark day for press freedom around the world.

His own organisation, Wikileaks, condemned the decision immediately:

BREAKING: UK Home Secretary approves extradition of WikiLeaks publisher Julian Assange to the US where he would face a 175 year sentence – A dark day for Press freedom and for British democracy
The decision will be appealedhttps://t.co/m1bX8STSr8 pic.twitter.com/5nWlxnWqO7

And UK investigative outfit Declassified UK re-shared their graph on the connections between what they consider anti-Assange figures involved in his years-long extradition process:

⚠️ Priti Patel has, shockingly, approved Julian Assange's extradition to the US.

This is what he's been up against. Please RT.

In a statement, the US media freedom organisation Freedom of the Press said:

By continuing to extradite Assange, the Biden DOJ is ignoring the dire warnings of virtually every major civil liberties and human rights organization in the country that the case will do irreparable damage to basic press freedom rights of U.S. reporters.

Legendary reporter John Pilger, a stalwart ally of Assange, said Patel had condemned the Wikileaks founder to “an American hellhole”:

Home Secretary Priti Patel has approved the extradition of Julian #Assange to an American hellhole. A new appeal will now challenge the political rottenness of British 'justice'. Either we raise our voices as never before, or our silence colludes in the death of an heroic man.

Some MPs voiced their opposition to the decision, pointing out that Assange had exposed western crimes carried out during wars in the Middle East:

Disgraceful decision by Priti Patel to approve the extradition of Julian Assange to the USA.

There he faces the rest of his life in prison for his journalistic work exposing war crimes in US-led wars on Afghanistan and Iraq.

This decision strikes a blow to press freedom. pic.twitter.com/CS84Xhqe0a

Meanwhile US journalist Kevin Gozstola, who closely covered the Assange extradition proceedings, warned that press freedom was diminishing all over the world with the decision:

The state of press freedom in the world darkens. UK Home Secretary Priti Patel served the US government and approved the extradition of jailed journalist and WikiLeaks founder Julian Assange for a US trial.

And even mainstream journalists like John Simpson added their voices, warning that the implications of the decision would have far-reaching consequences for journalists everywhere:

Journalists in Britain and elsewhere will be very worried by the decision to extradite Julian Assange to the US — both for his own well-being & for the precedent it creates for journalism worldwide.

A former UN expert on global democracy and equity said the extradition evidenced “the breakdown of the rule of law in the UK”:

The decision of the UK Home Secretary to extradite Assange to the US merely confirms what everyone knows, the breakdown of the rule of law in the UK and the subservicence of the judiciary to the executive.

Moreover, journalist Matt Kennard tweeted a screenshot of the famous Collateral Murder video. The leaked film showing a US helicopter murdering civilians, including civilians in Iraq, was one of Wikileaks’s most powerful exposes:

They want Assange dead or silenced forever because he drew back the curtain and let us get a view of how the world really works.

It’s that simple. Assange is the proxy but the war is on your right to know. The war is on democracy itself. Killing him is just one stage of it. pic.twitter.com/ZBso5YTn4A

He is a journalist and a publisher, and he is being punished for doing his job

Wikileaks confirmed they would appeal against the extradition. Powerful forces are aligned against Assange, and many journalists must worry for their own safety. Especially when they see other reporters treated in this way by two ostensibly democratic states like the UK and US.