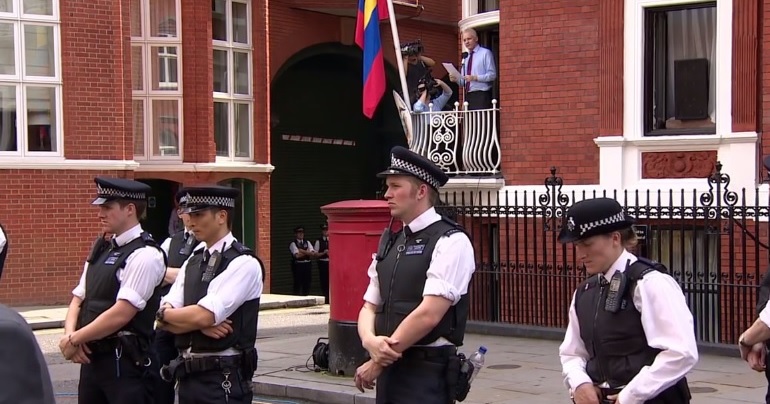 Swedish prosecutors were considering dropping the extradition proceedings against Julian Assange in 2013, new evidence shows. But the UK government pressured Sweden to keep the case against the WikiLeaks founder going.

Assange is still in the UK five years later. And these latest revelations are stoking suspicions that the government is keeping him detained for political reasons.

Stefania Maurizi is an Italian journalist. She has been digging into the arbitrary detention of Assange in the Ecuadorian Embassy. And she took the UK government to court in November 2017 in an attempt to force it to release information regarding the case.

Assange took refuge in the embassy in 2012. At the time, Sweden was investigating a series of allegations against him of a sexual nature and had a European arrest warrant for him. Sweden dropped the investigation in May 2017. But Maurizi has obtained emails which show the Crown Prosecution Service (CPS) pressured Sweden to keep Assange’s case going.

In August 2012, the CPS emailed Swedish prosecutor Marianne Ny about an article that suggested Sweden may drop the case. A CPS official wrote [pdf]:

Don’t you dare get cold feet!!

Then, in October 2013, Ny wrote to the CPS saying that she was “obliged to consider to lift the detention order (court order) and to withdraw the European arrest warrant”. She explained:

There is a demand in Swedish law for coercive measures to be proportionate. The time passing, the costs and how severe the crime is to be taken into account together with the intrusion or detriment to the suspect.

In response, the CPS asked [pdf] for some time to “consider all the angles”. And in December of that year, a CPS official wrote to Ny saying “I do not consider costs are a relevant factor in this matter”. The Metropolitan Police surrounded the Ecuadorian Embassy between 2012 and 2015 at a cost of at least £12.6m.

In response to the new revelations, a CPS spokesperson said:

As there are legal proceedings still under way it would be inappropriate to comment.

Maurizi’s probing has also revealed that the CPS destroyed key emails relating to the case. She also discovered that the UK explicitly advised Swedish representatives not to travel to the UK to interview Assange at the embassy. Assange and his lawyers had offered such an option, which is fairly commonplace.

Assange has long suspected that if he left the embassy the UK would extradite him to the US. He suspects the country has a sealed indictment ready for his prosecution because of his WikiLeaks releases. And it’s not hard to see why Assange is suspicious.

As Maurizi’s investigation has shown, the UK has taken action that ensures Assange either stays in the embassy or walks out in chains. Indeed, even though the Swedish investigation is now over, the UK still plans to arrest him for skipping bail when he entered the embassy in 2012. Assange’s lawyers will challenge this in court on 13 February.

But as investigative journalist Glenn Greenwald has pointed out, it very much looks like the UK is punishing Assange for publishing documents that the powerful would rather we didn’t see. That would be political persecution, which has no place in 21st-century Britain.

– Support whistleblowers with The Courage Foundation.