A group of disabled people just visited the 'Calais Jungle'. Here's what they found. - Canary 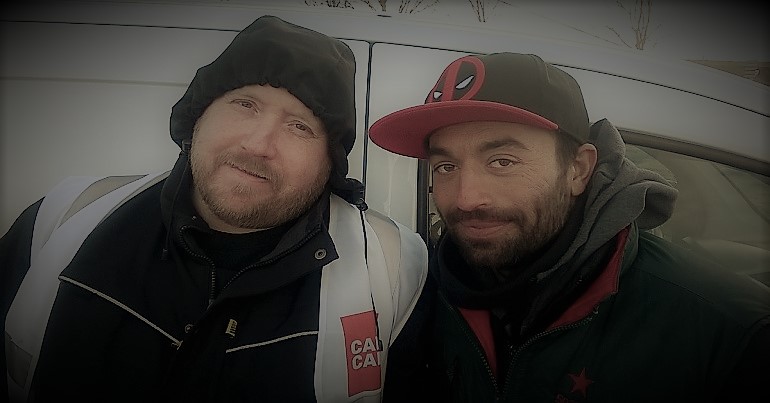 A disability rights campaign group has just given vital supplies to the so-called ‘Calais Jungle’ refugee camp in France. And the visit is a timely reminder of a situation that hasn’t gone away.

Disabled People Against Cuts (DPAC) members Keith Walker, Ellen Clifford and Mark Dunk made the three-hour round trip on Sunday 11 February. As BBC News recently reported, the Calais Jungle was cleared in 2016, but hundreds of people still live in the area. Local charities say around 800 refugees are rough sleeping in the woods. And BBC News claims that the refugees are “hoping to reach the UK”.

DPAC was supporting Care4Calais, a charity which sends supplies to refugees in and around Calais.

Walker told The Canary what he found:

When we arrived in Calais, the first thing that hit me was the amount of donations there. It was great to see.

We were on way to our allocated site and we passed the jungle. This was a sight I will never forget.

On arrival, about 30 refugees met us, ranging in age from 17 to 35. They were huddled around a little fire trying to keep warm.

This is How the refugees keep warm. @Care4Calais It started sleeting while took this. pic.twitter.com/cK2QlHYDeE

But one man made quite an impact on Walker. He told The Canary:

We opened up the van to give out parcels of warm clothing and other supplies. And this was when I first came across Wazim. Immediately, he noticed my hat, and I gave it to him. He was really grateful.

We talked about the police brutality that occurs. They spray CS gas in their sleeping bags and put out their fires. I will never forget Wazim.

The Calais Jungle: not going away

In January, France’s President Macron and UK Prime Minister Theresa May signed a treaty. It aims to make the processing of the refugees in Calais “more efficient”. But with conditions still bad and alleged violence from police, life for hundreds of refugees is dire:

The bridge were refugee will be sleeping tonight. @Care4Calais @paulapeters2 pic.twitter.com/9LaVxJUMUh

DPAC will fight injustice and persecution wherever it occurs. Care4Calais do great work, and we are proud to support them.

And it seems the refugees need support from the likes of DPAC and Care4Calais more than ever.