Campaigners are calling on people to 'stand up don't be counted'. Wait, what...? - Canary 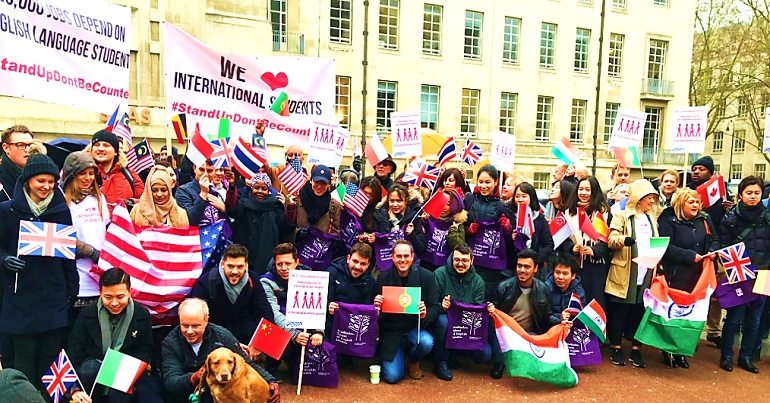 On Tuesday 13 February, campaigners demonstrated in central London. Their call-to-action? “Stand up don’t be counted.” And while this may sound like an odd request, when you realise what people are calling for it makes perfect sense.

Stand up and what…?

And people are angry about this.

So far, the government has flip-flopped over whether international students studying in the UK should be included in this figure. So on 13 February, a rally led by business group London First was held at Torrington Square. It was making some noise about the issue, which could potentially affect over 400,000 students a year:

With International students telling the Government to take them out of the net migration target #StandUpDontBeCounted pic.twitter.com/24bJxTWmmT

Delighted to have cross-party support for our call to take #InternationalStudents out of the net migration target, with @MayorofLondon signing our letter and @jon_bartley @TulipSiddiq @vincecable joining us to send a message to @theresa_may https://t.co/rwKEpYlxop pic.twitter.com/aJDRfSXMuU

The group is calling on the PM to exclude international students from net migration targets. It claims that:

The rally got cross-party support from Green Party co-leader Jonathan Bartley, Lib Dem leader Vince Cable, and Labour MP for Hampstead and Kilburn Tulip Siddiq. But the issue of international students has caused friction within the Conservative Party, too.

As The Guardian reported, some “high-profile Tory rebels” – including Nicky Morgan, Tom Tugendhat and Bob Neill – disagree with the government’s stance. Now, it would appear May might be preparing to backtrack on the issue if the government is defeated in a Commons vote on it.

But speaking to The Canary, Bartley made a broader point about the net migration target. He said:

Including international students in the net migration target sends the wrong message. Students are people, not numbers, and they contribute just as much to Britain as they gain from studying here. Britain’s education system is something to be proud of. But academics and students from other countries helped to build it. We must recognise this by continuing to welcome them. That means dropping students from the net migration target as a first step towards ending the government’s hostile environment for migrants.

May didn’t have a particularly good track record on immigration when she was Home Secretary. Who can forget the controversial ‘go home’ vans, for example? And now, with a potential rebellion from inside her own party over international students, the PM has another Brexit-shaped headache looming.