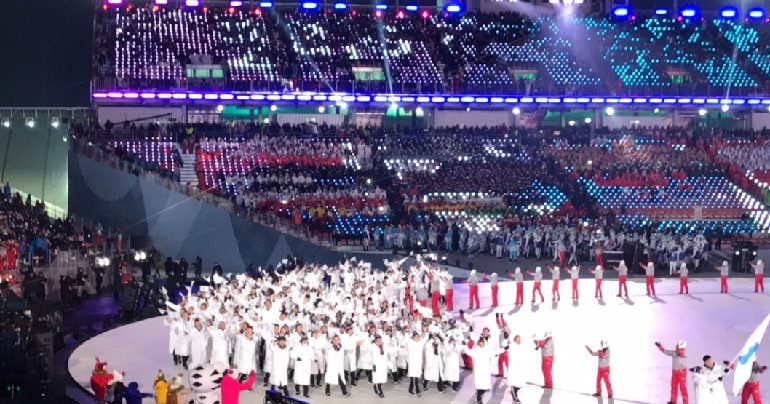 Easing tensions between North and South Korea have got US warmongers up in arms. And their collective tantrum is visible for all to see.

When athletes from North and South Korea came out together during the opening ceremonies of 2018’s Olympic Winter Games, there were reportedly “huge cheers”. Even most of the people in US Vice President Mike Pence’s box stood up. But he didn’t. And his heart was clearly unwarmed by the show of Korean unity:

Despite potential talks, and irrespective of if they happen w/USA or S. Korea, new strong sanctions are coming very soon and the maximum pressure campaign will only intensify until North Korea abandons its nuclear program. All our allies agree!

(Forget that sanctions are a dead-end policy which hurt ordinary people the most, of course.)

But it wasn’t just Pence who was unimpressed. The mainstream media also came under fire from some people for its apparently positive coverage of North Korea’s Olympic delegation – and its cheerleaders in particular.

If North Korea declared war on the US today, I sincerely wonder how many American liberals would consider joining forces.

The media praising North Korea and their Olympic appearances is sickening. You're essentially saying you support Kim Jong-Un and his regime.

In reality, mainstream media outlets clearly called North Korea’s efforts out as “propaganda“, and even “Weapons of Mass Distraction“. The Washington Post, meanwhile, described Mike Pence as “an anti-propaganda warrior” (as if propaganda had never been a comfortable bedfellow of the Trump Administration).

And in a final blow to the Twitter fear-leaders, New York Times writer Max Fisher pointed out:

Few people would forget about North Korea’s human rights abuses just because of some over-choreographed cheerleaders. That would mean ignoring groups like Human Rights Watch and Amnesty International – which remain highly critical of the country’s record.

In reality, most people who thought North and South Korea coming together at the Winter Olympics was something positive saw a chance for the world to step back from nuclear war.

Since taking power, Donald Trump has threatened unilateral action against North Korea – which experts think would be disastrous. He has also threatened the country with “fire, fury and, frankly, power – the likes of which this world has never seen before”. And he used his first speech to the UN General Assembly to say the US might have to “totally destroy North Korea”.

Speaking of another possible US war in North Korea, former Harvard University professor Ash Carter has said it:

would have… an intensity of violence associated with it that we haven’t seen since the last Korean War.

The US reportedly committed numerous war crimes during the Korean War (1950-1953). Air Force General Curtis LeMay, for example, wrote: “we killed off over a million civilians and drove several million more from their homes”.

And today, because the US has around 6,800 nuclear weapons and North Korea reportedly has 10-20, the conflict could go nuclear. Indeed, ex-US secretary of state Henry Kissinger recently said the “temptation” to hit North Korea with a nuclear first strike was “strong”.

In short, there’s one obvious reason why so many people were enthused by the show of Korean unity at the Winter Olympics. North Korea may abuse its citizens’ human rights. But war would leave few citizens behind to have rights. So any easing of tensions is a good thing – no matter how much US warmongers tell you it isn’t.