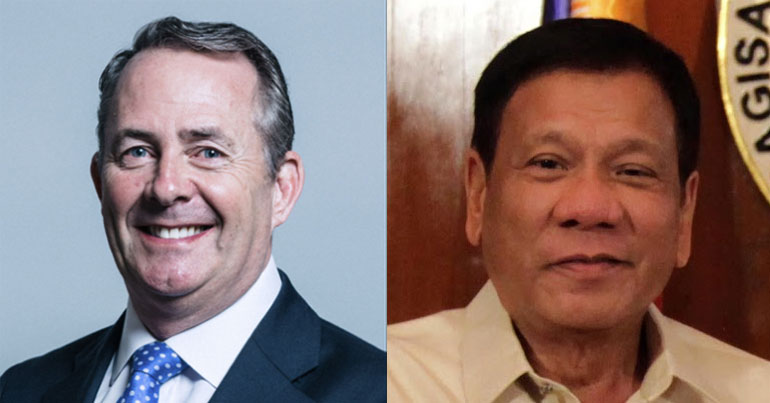 Philippine President Rodrigo Duterte has ordered his soldiers to shoot female rebels in the vagina. And people around the world have reacted with horror. But there has been no resounding outcry from the Conservative government. Because Duterte is a man International Trade Secretary Liam Fox wants to trade more closely with.

“We won’t kill you. We will just shoot your vagina.”

Duterte has told a group of former communist rebels in the Philippines:

Tell the soldiers. There’s a new order coming from the mayor [Duterte]. We won’t kill you. We will just shoot your [female rebels’] vagina.

Women without vaginas, he went on to suggest, would be “useless”:

It encourages state forces to commit sexual violence during armed conflict, which is a violation of international humanitarian law.

Yet this is the man Britain’s International Trade Secretary wants to work more closely with.

The UK and the Philippines have a well-established and strong relationship built on a foundation of shared values and shared interests and we want this partnership to continue to flourish. My visit to the [sic] Manila is a chance to see and hear about the huge potential for strengthening relations between our countries.

Fox was clear. He was offering “British expertise and quality” to the Philippines in the hope of securing “exciting collaborations” with the country in the fields of “defense, health care, marine and financial technology”. He practically begged the regime for more trade. And he finished by calling for “stronger relationships between the UK and our trading partners in South East Asia”.

So, has Duterte suddenly turned rogue since Fox went to beg him? No. He is currently being investigated by the International Criminal Court (ICC) over alleged crimes against humanity committed since July 2016 – well before Fox’s visit. A report submitted to the ICC suggests he has been “directly responsible for ‘extrajudicial executions and mass murder’ over three decades since he began his war on drugs as mayor of Davao in 1988”, according to The Guardian.

At the time of Fox’s visit, Duterte’s brutal ‘war on drugs’ had already killed more than 7,000 people. Fox was visiting a man, nicknamed “the Punisher”, who used his 2016 election campaign to ‘joke‘ about the gang rape and murder of an Australian missionary in a prison riot, saying:

but she was so beautiful, the mayor [Duterte] should have been first. What a waste.

And as The Canary has previously reported, from the moment he became president, Duterte urged Filipino citizens to kill people who used drugs:

If you know of any addicts, go ahead and kill them yourself.

In Davao I used to do it personally. Just to show to the guys [police] that if I can do it why can’t you?

And four months before he visited, Amnesty International slammed Duterte’s war on drugs as a murderous war on the poor which targeted children “as young as eight” in systematic, extrajudicial killings. Duterte’s response to allegations of human rights abuses? Simply:

Are they humans? What is your definition of a human being?

All of this happened before Britain’s International Trade Secretary went to Manila, met the President, and posed with him for photographs.

Fox certainly knew the kind of man he was dealing with. In fact, a Whitehall source confirmed it at the time of his visit, telling The Guardian that Fox had raised concerns about human rights during his meeting with Duterte. But he still visited Duterte and penned an article in the local press, begging his government to trade more closely with Britain.

Why? Because this is what Liam Fox does. This is his post-Brexit trade strategy. Since becoming International Trade Secretary, Fox has visited a stream of countries with dubious human rights records in search of trade deals, prompting former Liberal Democrat leader Tim Farron to comment:

Another day, another desperate visit by Liam Fox to secure a trade deal with a country that has a questionable record on human rights.

Just last week, he accompanied Theresa May to China, looking to reinvigorate the two countries’ trading relations. Despite promising to raise human rights concerns with the Chinese government, the British delegation was praised by China for ‘sidestepping’ human rights during its visit.

Fox has also signed agreements to make UK-US trade talks more secretive. The Trade Bill he is currently pushing through parliament will give ministers “unprecedented powers to bypass parliamentary scrutiny in forming future trading relationships”, according to Labour MP Geraint Davies – “with severe consequences for democracy, human rights and the power of multinational companies”. His department spends up to a billion pounds every year subsidising sales of weapons to repressive regimes like Saudi Arabia, sales which have sharply increased on his watch. In fact, Fox has designated many countries with records of human rights abuses – including Saudi Arabia – as “priority markets” for the UK’s “defence and security opportunities”.

So it should come as no surprise that Fox feels his country and Duterte’s have “shared values”. The Conservative government’s strategy for post-Brexit trade is all about forging close links with any country that will have us, whatever its record on human rights. A trading ally announcing they want to shoot women in the vagina doesn’t even register on this government’s radar, as long as the relationship is profitable for Britain. Hanging out with people like Duterte is literally what this government has been working towards since Theresa May became Prime Minister. And anyone who is not deeply worried right now just hasn’t been paying attention.