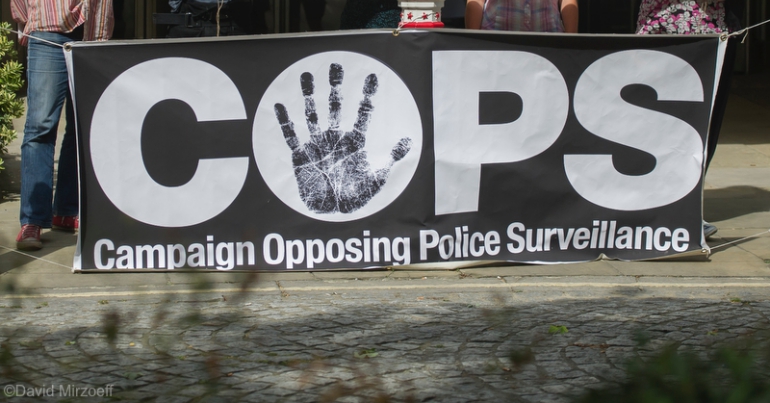 Victims of police spying are giving the world a clear message about police spying. Through a series of postcards, they are delivering the message:

I didn’t deserve to be spied upon. No one deserves it.

Police Spies Out of Lives (PSOOL) is a legal support group for people who have been spied on by undercover officers. It has released a series of postcards to highlight the stories of some of those who were targeted for police infiltration.

The campaign also highlights a fundamental point about police spying on campaigners:

We all have a right to campaign for change without fear of State abuse.

Working on a community allotment

One of the postcards highlights the story of a woman who worked on an allotment with asylum seekers:

Our new postcard is now online: https://t.co/KuUv3NbM3j I worked in my community allotment with asylum seekers. I didn't deserve to be spied on. Nobody deserves to be spied on. #spycops @copscampaign pic.twitter.com/8nvrR8FCTj

According to her story:

I was a volunteer at my local city farm. I ran a gardening club, mostly with asylum seekers, refugees and other unemployed people. I spent most of my time growing organic salads and vegetables. I can’t think of a single piece of useful intelligence that the police might have got from me, despite putting an undercover police officer right into my life.

She also says that she was “collateral damage”, because they were on the “periphery of the scene or movement that the police were interested in”.

Another of the postcards highlights a person who was spied upon because they helped make banners for an anti-fascist protest:

I made banners for anti fascist demonstrations. I was involved in a community centre in the town I lived in. A lot of my friends, who I met there, were politically aware, involved in local campaigns, were members of trade unions where they worked, supported good causes, & so on. pic.twitter.com/idvQWalmgd

The police also targeted those who were active in trade unions:

But the police didn’t just spy on trade union activists; they allegedly passed on information to firms like The Consulting Association. This information was used to blacklist workers. And many of those blacklisted found themselves unable to work.

A further image shows another group targeted by undercover officers:

@copscampaign Today we're celebrating some of the "criminal damage" done to walls, fences & adverts by campaigners through the years, and making the point that nobody, whatever their tactics, deserved the kind of intrusive political policing performed by the #spycops units pic.twitter.com/zsKUojFrb4

The group was involved in “direct action” against “advertising”:

We would spray messages on billboards which we considered sexist.

And they were also involved in “subvertising”:

As we got older we began doing more “subvertising”, where we’d change the advert more subtly, so it wasn’t immediately obvious that it had been doctored. I think we made a lot of people stop and think. And made some of them laugh.

One of the women involved was targeted by an undercover officer who deceived her into having a sexual relationship with him:

However I found out last year that one of the men who I met at that time was actually an undercover cop. He came out spray-painting with us a couple of times. I considered him mostly a friend, but we ended up in bed together several times.

Out of our lives

These images aptly demonstrate the absurdity of a police spying operation against campaigners that has lasted decades. Officers stole the identities of dead children, had sexual relationships with activists, and spied on grieving families. Whether it is community gardening, trade union rights, or minor criminal damage, these people are not hardened criminals. They are not involved in organised crime. And they did not deserve this infiltration in their lives for simply wanting to make the world a better place.

– Support Police Spies Out of Our Lives.