Social media hits back at a major website for its suggestion of 'slavery 2.0' - Canary 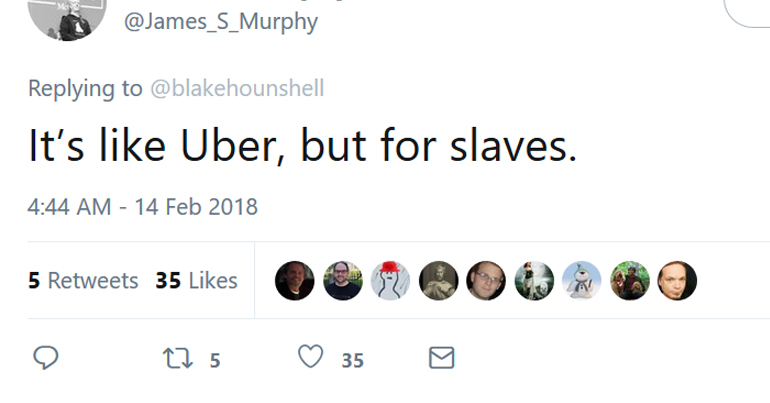 Twitter is on fire after US-based politics website Politico published a piece called Sponsor An Immigrant Yourself. The piece imagines a “Fiverr for immigrants” programme, referring to the gig economy platform where users sell their skills for at least $5. But reactions to Politico’s article have branded the idea as “slavery 2.0”.

Law professor Eric Posner and economist Glen Weyl outline in the piece a “citizenship sponsorship for immigrants” idea called a ‘Visas Between Individuals Program’. And it would replace traditional visas for migrants into the US.

The piece gives the imaginary example of Mary Turner from West Virginia, who hires Paraguayan migrant Sofia for a pet-walking business. Mary offers her:

a room in her basement, meals and $5 an hour. (Sponsors under this program would be exempt from paying minimum wage.)

And after a successful interview, Sofia comes into the US to live in Mary’s basement on a visa agreed between the two. This means Sofia doesn’t need to apply for a visa from the US government. Posner and Weyl say this is similar to existing au pair and corporate sponsorship of workers programmes.

But many people are taking aim at the article, saying it suggests a form of slavery:

is this not slavery??? holy SHIT here we go https://t.co/xDdLooRR9A pic.twitter.com/0FIvt0Jt2c

This article is a horrifying justification for modern slavery.https://t.co/3xDw4TT8K3

Please tell me that this Eric Posner/@glenweyl piece is a Swiftian satire a la “A Modest Proposal,” @politico.

“What If You Could Get Your Own Immigrant?” https://t.co/f7bIW8FWHV pic.twitter.com/mmfza0ISML

The article’s current title is Sponsor An Immigrant Yourself. But as a tweet from Politico Magazine Editor Blake Hounshell suggested, its initial title was What If You Could Get Your Own Immigrant?:

What if you could get your own immigrant? https://t.co/gtDATGburC

And that title alone stoked outrage:

someone actually wrote that, thought it was ok, press send, and had editors approve of it and the article as a whole.

How do you even type the phrase 'get your own immigrant' without realizing their is something profoundly wrong with you?https://t.co/QeRXSIT1kD

Weyl responded that he had no influence on the title. But he still “stand[s] by the argument”: 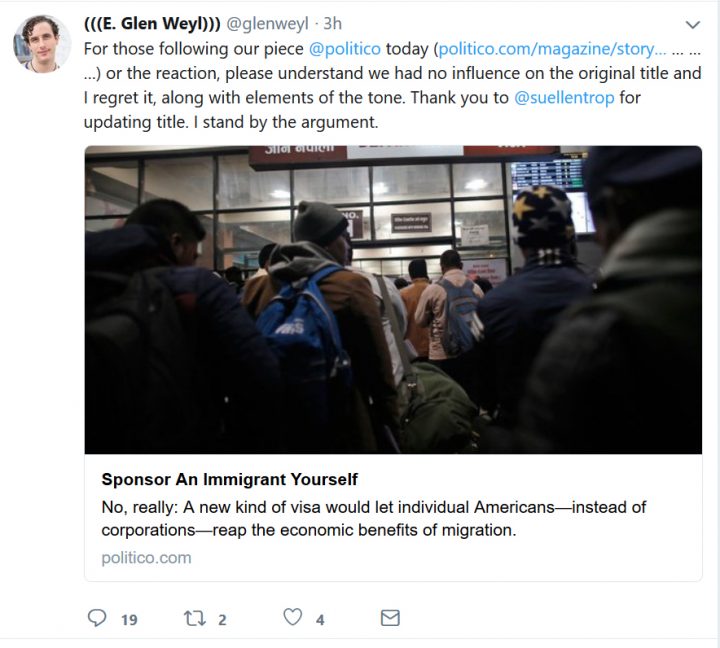 But some have really picked the article itself apart. For example, New York Times journalist Kendra Pierre-Louis explained that a migrant nanny paid $5 per hour means a local babysitter would not be hired at minimum wage. And this would lead to depressed wages “for those already at the bottom”.

Whether or not it will depress wages for those already at the bottom. If you can Fiverr up an immigrant for 5 bucks an hour as a live in nanny, no need to hire a babysitter at 10 or 15 bucks an hour /2

(For all of Pierre-Louis’s comments, see this thread.)

As yet, Weyl has not responded on Twitter to specific criticisms.

A perfect illustration of the gig economy slipping toward extreme outcomes

Posner and Weyl’s proposal is built on the growing gig economy sector. Notable gig economy companies include Deliveroo, Uber, Airbnb and Fiverr. They enable people to sell time, resources and skills through an app or website.

But the sector has faced a backlash. It has been accused of exploitation, a lack of workers’ rights, and billions in lost taxes. Fiverr itself faced criticism for an ad on the London Underground that “glorifies exploitation”. And in November 2017, Labour MP Frank Field called for government action to stop the sector’s bad practices.

Posner and Weyl’s piece, meanwhile, shows the ease with which the gig economy slips toward extreme outcomes; not just bad working conditions, but full-on indentured servitude. It also shows how it can be marketed as something positive for “working-class natives”. But fortunately, the social media response shows that many people will not fall for it easily.

– Read other stories at The Canary about the gig economy.