A pro-Trump politician has compared himself to JFK. And Jesus. And Hitler. - Canary 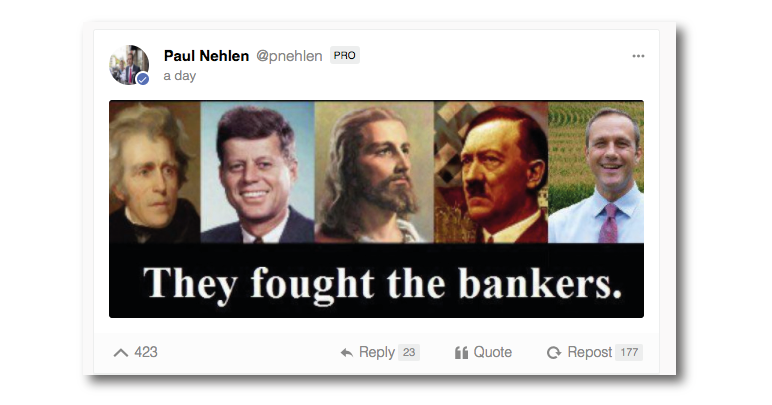 In February 2018, ‘alt-right’ US politician Paul Nehlen was suspended from Twitter and denounced by the Republican Party. He’s since posted an image which makes clear that his politics are confused and overtly antisemitic.

As Nehlen’s antisemitism and extreme views have been clear for some time, it’s hard to see why it took so long for his party to abandon him.

Much like Trump, Nehlen is a businessman who has never held public office. He ran against Paul Ryan, the Republican and 54th Speaker of the US House of Representatives, in the 2016 congressional primaries. Nehlen only received 16% of the vote, but he did garner support from Breitbart – the outlet that was formerly run by Steve Bannon. He also received Donald Trump’s ‘appreciation’. Nehlen is planning to run against Ryan again in 2018.

Although Nehlen has long been accused of holding extremist views, he has been more open about them in recent months. In January 2018, he appeared on the podcast of David Duke – a former Ku Klux Klan Grand Wizard. He also accused his critics of “working for the Jewish media” and published a list of Jewish journalists on Twitter.

Nehlen was denounced by Breitbart as having “gone off the deep end” in December 2017. Earlier that month, he appeared alongside Steve Bannon to support the controversial Roy Moore, who was accused of sexual misconduct.

Nehlen was permanently banned from Twitter on Monday 12 February following a racist post about Meghan Markle. He had previously avoided a ban despite tweets that were clearly antisemitic.

Despite being banned from Twitter, Nehlen is still active on Gab. Gab is similar to Twitter, but it’s notable for being popular among white supremacists. This is especially the case since Twitter started removing the more prominent racists. 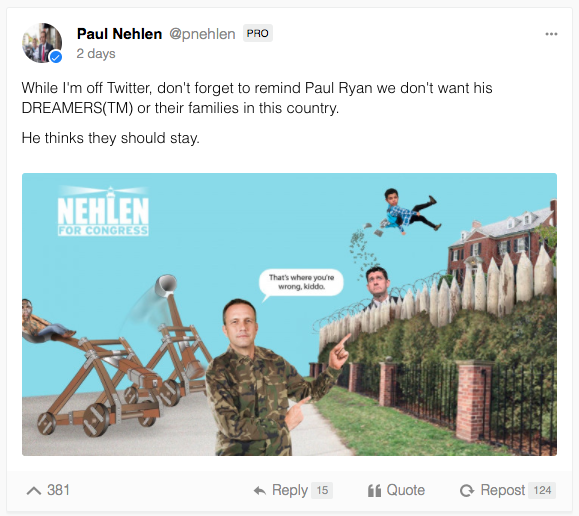 He has also made posts that suggest he still intends on running for Congress despite being ousted from the Republican Party: 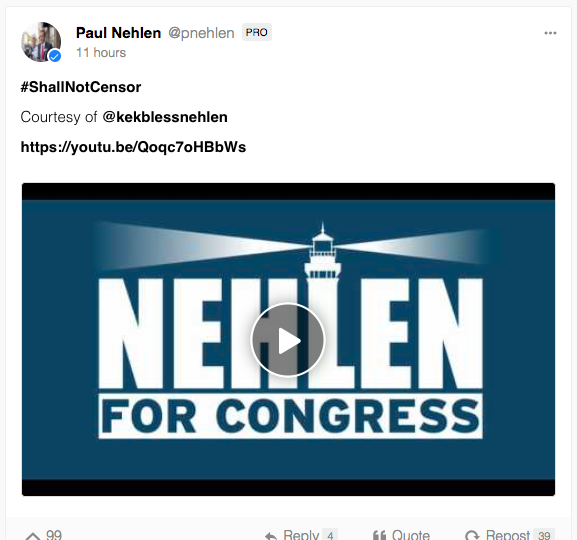 There have always been figures like Nehlen on the fringe of US politics. The concerning thing here is that, despite his obvious extremist tendencies, Nehlen wasn’t on the fringe until recently. He was in the Republican Party, and he enjoyed support from a site with close ties to the President.

Neither of these things should be acceptable.

– Join us, and help us to hold the powerful to account.