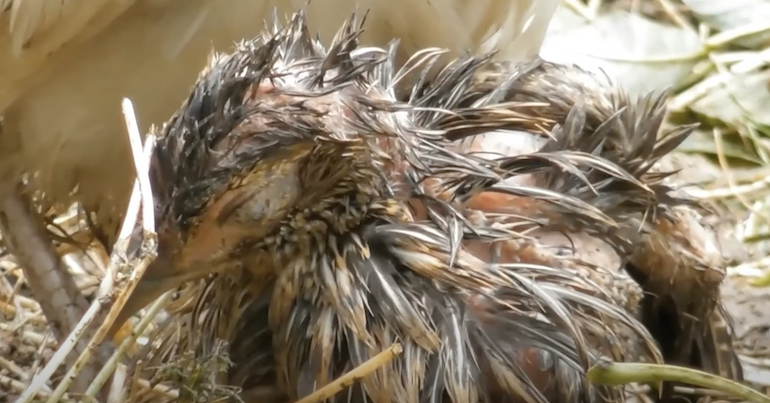 Not-so-brave hunters in England and Wales were able to slaughter two bird species – pheasant and woodcock – from 1 October. However, a scandal hit the shooting industry just as they took up arms against the birds. Footage emerged of dead and dying birds living in squalid conditions in pens allegedly on a shooting estate in Lancashire.

A systemic failure of care or compassion

Non-profit Keep The Ban and the Hunt Investigation Team (HIT) joined forces for the probe into the Leighton Hall Estate. As the estate explains on its website, it makes up 10% of the Arnside and Silverdale Area of Outstanding Natural Beauty. It has pheasant shooting listed as one of its “commercial activities”.

HIT investigators say that they visited the pens where the estate raises pheasants in September. Keep The Ban released footage allegedly from that visit on 1 October:

The footage shows birds in severe distress, with some appearing to be gasping for breath. Collapsed birds, dead birds, and the apparent cannibalising of weaker birds by others all feature in the video. The bodily conditions of most of the birds depicted are extremely poor, with individuals often featherless and skeletal. HIT also says that bird feeders and water troughs were empty and filthy.

This footage is horrendous, there is no two ways about it. And it is important to emphasise that this wasn’t simply ‘a bad day’. The conditions in the pens at the Leighton Hall shooting estate, the numerous dying birds and dead bodies, and the lack of proper hygiene and disease control attest to a chronic and systemic failure of care or compassion.

Pheasants are a non-native species in the UK. They are usually imported as eggs or young birds and raised in pens prior to release for shooting. The birds are variously considered livestock and wildlife at different points, depending on when the shooting industry wants to kill them or raise them (for killing).

The footage raises questions over potential violations of animal welfare laws. As the code of practice for the welfare of so-called gamebirds points out, breeders must abide by certain provisions in the Animal Welfare Act 2006. Breeders who cause unnecessary suffering to such birds commit an offence under section four of the act. Moreover, section nine of the act states that breeders commit an offence if they don’t take “reasonable” steps to meet “the needs of an animal”. This includes the birds’ need to “be protected from pain, suffering, injury and disease”.

According to HIT, they reported the situation to the RSPCA as an urgent priority due to the “scale of the suffering”. They wrote:

We are informed that the RSPCA and police attended the site. However by the time this visit was arranged, the gamekeeper had *somehow* been alerted and was able to clear away the evidence. Despite the horrifying footage obtained, we believe no further is action is being taken.

The Canary contacted Leighton Hall Estate and the Department for Environment, Food and Rural Affairs (DEFRA) about the allegations. Neither responded by the time of publication.

We also contacted the RSPCA. A spokesperson said:

We are aware of this upsetting footage and we would like to reassure people we will always look into concerns that are made to us about animal welfare. We won’t be commenting further at this stage.

The dire physical state of the birds in the footage also raises concerns over disease risk. Vigilance is particularly vital at present due to the spread of a highly pathogenic avian flu in 2021-22, which has devastated captive and wild bird populations in the UK. The RSPB’s director of policy Jeff Knott recently told National Geographic:

the severity of the situation and scale of the impact is unprecedented and very, very scary. It’s a huge crisis that could turn into a catastrophe unless we get ahead of it.

DEFRA says that there are multiple clinical signs of the avian flu. These include “incoordination and loss of balance”, “twisting of the head and neck”, and “respiratory distress”.

Keep The Ban explained that the estate in question is an “immediate neighbour” to the RSPB Leighton Moss Nature Reserve. It further said that the estate has released “hundreds of pheasants” into the area.

Pownall told The Canary that the shoot needs to be “closed with immediate effect”. He added:

we are calling on the public to politely contact the estate to ask them to do just that.

This is just the latest in a long line of controversies that the shooting industry has faced.

NINE (yes, 9) raptors found shot & dumped in bags outside gamekeeper's houses on Millden Estate and at the nearby River Esk in the Angus Glens (not on Millden).

Police Scotland has remained silent about this bird of prey massacre because….? New blog ⬇️https://t.co/8xAlaP332K pic.twitter.com/5Up8ogT5Zu

Another one involves the other species – woodcock – that also becomes a target from 1 October each year. Woodcock are wild wading birds that are in decline.

Shooters gun down around 160,000 woodcock between October and January each year, despite their declining status. The wildlife advocacy organisation Wild Justice has highlighted that, under such circumstances, there is a case for halting all woodcock shooting. But it has proposed a modest measure that would be simple and quick to implement, calling for the shooting season for them to be restricted to two months.

Prior to losing his DEFRA post, George Eustice signalled that the department was open to reviewing the protections for target birds, including species like woodcock.

As Eustice highlighted, the government has committed to halting species decline by 2030. This task couldn’t be more urgent, with a recent report from Birdlife International showing that 49% of the world’s bird species are in decline. This is an increase of nine percentage points from just four years ago. Its 2018 State of the World’s Birds report noted a 40% decline.

Putting the brakes on the UK’s shooting seasons could help the country meet its purported goal. Experts say that the release of millions of non-native birds, like pheasants, has a devastating impact on other wildlife and ecosystems. Meanwhile, shooters kill numerous species like woodcock, coots, moorhens and more at various times of the year. Other species like carrion crows and jackdaws, meanwhile, are killed to protect the industry’s interests.

In other words, the shooting industry causes ecological carnage. If the UK is to meet its goal of halting species decline by 2030, a review of the so-called sport and a crackdown on it is an absolute must.