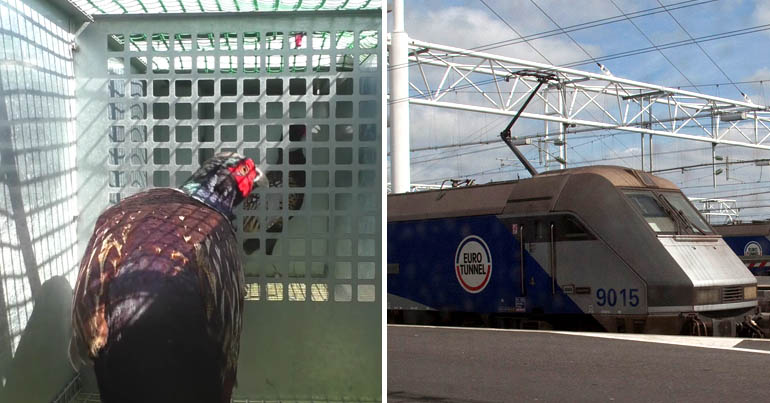 New research carried out by the Hunt Saboteurs Association (HSA) revealed that Eurotunnel is the last company importing millions of game birds into the UK. In response, the HSA has created a way for everyone to take action against this cruel practice.

On 20 April, the HSA published details of a French court document showing Eurotunnel still imports day-old pheasant chicks. The HSA said Eurotunnel is the last transport company to do this. It comes after cross-Channel ferry companies boycotted the cargo from two major French breeding co-operatives, Gibovendée and L’Envol de Retz, in 2015. The two breeding networks tried suing P&O Ferries, Brittany Ferries, and DFDS in late 2018 for “discrimination” but were unsuccessful. However, the HSA reported that Brittany Ferries and DFDS are still importing eggs to the UK for hatching.

On 20 January 2016, then-agriculture minister George Eustice provided figures for pheasant imports in 2015. They showed French companies exported nearly 6 million live birds and 9.5 million hatching eggs to the UK. This is close to half of all the pheasants released into the UK countryside annually. According to the Times, UK exports make up about one-third of Gibovendée’s and half of L’Envol de Retz‘s annual turnover.

The HSA said Gibovendée and L’Envol de Retz are based in Nantes, meaning:

chicks are forced to travel for up to ten hours before reaching the Eurotunnel in Calais.

At the same time, it also published video that the organisation said was filmed in April 2019 at a farm “supplying the British shooting industry”. The footage shows cramped, barren cages and artificial lighting [1:12] used to increase egg production. The HSA also said breeding birds showed signs of “scalping”, which are head wounds caused by attempts to escape cages.

Once in the UK, pheasants face “awful” conditions before they are released. Investigations conducted in 2017 by the HSA and animal welfare organisation Animal Aid showed tiny barren cages, dead pheasants left to rot, beak restraints, and birds attacking each other due to stress.

The shooting industry is in a precarious position

The shooting community wants to hide this grim reality behind a veneer of quaint rural pastimes and simple country pursuits. But this latest exposé shows yet again that it’s in fact cold, cruel, and industrial in scale.

Just three companies are responsible for bringing in about half of the UK’s pheasants and partridges. This puts the shooting industry in a precarious position. As a result, the HSA is asking the public to email Eurotunnel, Brittany Ferries, and DFDS to call for an end to their current policies.

The past boycott of live chick imports by ferry companies showed public pressure can work. Further pressure could have a major impact, not only on millions of imported birds, but on the entire UK shooting industry.