What's driving the popularity of the recent independence rallies in Wales? 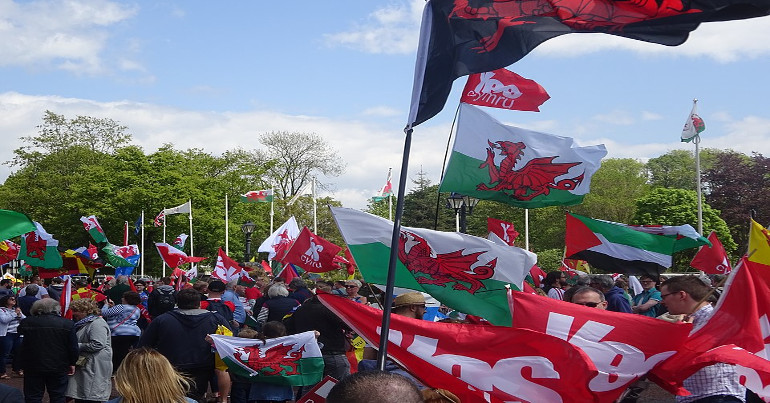 At the beginning of October 10,000 people marched in central Cardiff calling for Welsh independence. Marches like the one on 1 October are becoming a more frequent occasion. An increase in support for an independent Wales went alongside the UK’s final exit from the European Union.

In 2019, the year running up to 2020’s Brexit, people held at least three mass marches for Welsh independence. Over 5,000 people marched for independence through Merthyr Tydfil. In 2019, a majority of councillors in Gwynedd County Council in North Wales voted in support of independence. During the same year a YouGov survey of over a thousand people showed that 21% of respondents would support Welsh independence if there was a referendum.

The thousands that marched in Cardiff on 1 October show that the movement is still strong. Many supporters of independence tweeted out pictures of the march:

"The Tory government has left working people like us behind. Towns across Wales have been left to rot. People are growing up without hope."https://t.co/CwAAKTiwBT

It’s clear, not only from the success and popularity of the recent rallies in Wales, but also other events here and elsewhere, that change is afoot in these islands. For us, independence is an inevitable consequence of the end of Britain’s imperial project – a completely unjust and exploitative endeavour. Wales’s part in that project and the evils committed in its name cannot be denied. As we forge a new, free Wales, we have a moral duty to learn from the lessons of our past and the experience of other countries.

“A real need” to “prepare for Welsh independence“

Melin Drafod ran an event called ‘Imagining an independent Wales’ in the run up to the independence march in Cardiff. Talat explained what the group’s values are. He said:

Given that sooner or later Wales is going to gain its independence, as a group our focus is on how we as a society with those new freedoms can make choices that are progressive and rooted in the left-radical traditions in our communities. After all, Wales gaining its independence will be a reflection of a desire to see a very different way of life from the UK establishment’s hegemonic, hyper-capitalistic, militaristic consensus.

Talat explained that Melin Drafod’s priority was preparing the way for a “progressive independence”. He said:

Given that the United Kingdom is unravelling apace, there is a real need for us as citizens to thoroughly prepare for Welsh independence. Our priority is promoting progressive independence, not independence for its own sake. That’s why we are discussing solutions to the major crises of our age – from climate change and language minoritisation to the scourges of poverty and racism – both here and around the world.

A danger of “creating a smaller version of the British state”

One of the speakers at Melin Drafod’s event was Leanne Wood, the previous leader of the Plaid Cymru parliamentary party. She spoke about how she thinks the independence movement has progressed over time. She argued that:

the debate has moved on a lot in the last two decades from where we were 20 years ago. It’s gone in the right direction. I’m hearing lots of optimism and excitement… for the kind of Wales that we can create... It’s all possible, and it’s all within our hands, and it’s only us that are going to create that Wales that we’re talking about tonight. But there are no guarantees… It doesn’t mean if we get independence that all our problems will be magicked away.

She continued by saying that a progressive independence for Wales is:

something that we all want. It’s something tangible and it’s doable, but it’s not going to just happen automatically. And I think there’s a danger of creating just a smaller version of the British state… and what would be the point of that? We have to build something that enables people to be better off than they are now. We have to build something that enables people’s lives to be tangibly improved. Otherwise, we’re wasting our time. So I think we have to think very carefully about the kind of independence movement we are, and the kind of Wales that we want to build. I don’t think we can divorce ourselves from other struggles like the climate crisis, and the cost of living crisis.

“An alternative economic system to capitalism“

Wood spoke about her involvement in creating a plan for a new type of economy in the Valleys. Wood said the plan argued:

for an alternative economic system to capitalism, so that we could put the control in the hands of the workers or the owners of energy and food production in Wales so that it would stay in those communities… At the time, lots of factories were closing down and relocating to Asia and Eastern Europe. If we had worker-owned cooperatives creating renewable energy, feeding the benefits back into local communities, that would create a whole system that could potentially provide an economic base, as well as a response to the climate crisis.

“Culture, history and language are being destroyed”

Speakers at the 1 October march echoed the calls to renew Welsh independence efforts. One of those speakers was Agit Ceviz. He is a Kurdish resident of Cardiff, who has been organising for Welsh independence for many years. Described as “a proud Kurdish man who has adopted Wales into his heart”, Agit said:

According to Agit, people:

have to unite in our common interests. We are fighting for our right to live, to exist. We will not vanish without fight.

The need to create something different

Now is the time for radical ideas to blossom within the independence struggle. If the Welsh independence movement – and other similar ones – are going to move us toward real freedom, then ideas and visions are of paramount importance. We don’t need movements which are going to recreate the inequality and oppression of the British state. To be truly liberatory, these movements need to decolonise themselves. They need to create an economy that is based on co-operation not capitalism.

Ultimately they must critique the concept of the state itself, and its repressive institutions. Otherwise Welsh people’s dreams of independence may become just another form of domination by a new parliament and a new political class.