Could the government at least be stable while it fucks up the country? - Canary 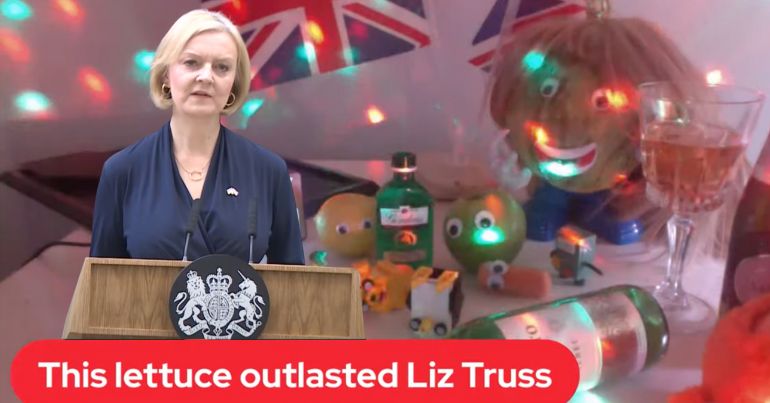 2 comments
Support us and go ad-free
On 20 October, prime minister Liz Truss announced her resignation after just 44 days in office. Blaming the “situation” of social and economic instability, the prime minister said: “I cannot deliver the mandate on which I was elected”. This comes after a month of political turmoil and increasing pressure on her to step down.

Oh dear. I can feel the buzz wearing off. I need another resignation to keep me going. Used to be just the one could get me through a whole week. Now I need a couple a day to get the same high

Tabloid paper the Daily Star was delighted to announce that its live-streamed ‘wet lettuce’ did indeed outlast the prime minister:

🚨 THE LETTUCE HAS OFFICIALLY OUTLASTED LIZ TRUSS AND WON 🚨

ALL HAIL THE LETTUCE.

Writer Jason Okundaye was quick to point out that Truss is the shortest-serving prime minister in the country’s history:

Liz Truss is the only Prime Minister in history to not serve even 100 days. She’s the shortest serving by a long mile

Meanwhile, writer Louis Staples shared his concerns for the authors of a book on Truss’ ‘rise to power’, which hasn’t even had the chance to hit shelves yet:

thoughts and prayers to the authors of this book. out December 8th! pic.twitter.com/nFUUYpWruj

Is it time for foreign intervention?

Britain has a long history of violently invading nations under the guise of offering support during moments of political turmoil. Proponents of British imperialism often argue that Britain spread liberal democracy through colonial rule.The UK-backed Iraq war was launched under the guise of promoting human rights and democracy. Perhaps now is the time for formerly colonised nations to return the favour?

Alright Britishians. I have heard all of your appeals for help and have decided to take action. I have met with the rest of the West African delegation, and after careful consultation, we shall convene a new stabilization mission to rescue your troubled little island. Stay tuned. https://t.co/Tu9wrjt2ED

Does the UK need a strongman to help them overcome their political instability?

On 20 October, chair of the 1922 Committee Graham Brady told Sky News that it:

will be possible to conduct a ballot and conclude a leadership election by Friday the 28th of October.

Sick and tired of the nation being dragged into Tory Party in-fighting, one Twitter user shared:

A General Election needs to be held man… we can’t keep getting caught up in Tory party beef.

Highlighting the devastation that the Tories have wrought in recent years, Labour MP for Nottingham East Nadia Whittome tweeted:

– A PM who partied while people died, breaking his own laws, and lied about it

It’s time to get the Tories (and their draconian, inhumane policies) out once and for all.