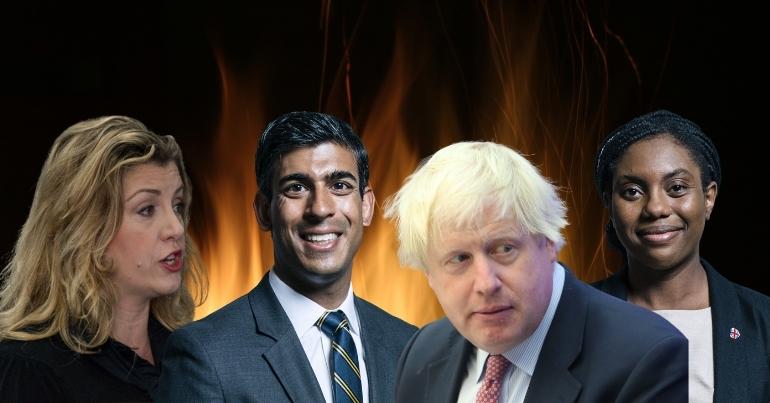 Here we go again. Yes – another month, and another internal Tory election for the UK’s prime minister is underway. So, who are the tired old Tories slogging it out to be able to screw the rest of us over even more?

As the Canary’s Joe Glenton previously wrote in May 2022:

if there ever was an age in which civility and honesty were the key ingredients in British politics (spoiler alert: this has never happened) then this is not it.

That was an understatement if ever there was one. So, after the catastrophe of recent days, we’re all waiting to see who the next unelected Tory PM will be – and the list is a veritable Who’s-Who of self-serving shits.

What’s the collective noun for a group of shits?

Former chancellor and previous leadership candidate Rishi Sunak is currently favourite to take the job. However, let’s not forget that he wasted billions of pounds of public money while posing as the man competently in charge of the UK’s finances. Then, the government allegedly gave his non-dom ‘tax-sheltering’ wife’s company £22m in public sector contracts. And, Sunak’s wealth is obscene – he’s worth around £200m. Once again, if he gets in, expect more policies detached from reality for the rest of us.

People are also touting current minister of state for trade policy Penny Mordaunt as a potential PM. A liar during the EU referendum, she tried to persuade Johnson to spaff hundreds of millions on Royal Navy yachts. A clear militarist, she also dabbled in reality TV – always an indicator of how serious a politician is. However, the best indicator of who Mordaunt is was her response to a UN report accusing the UK government of “grave” and “systematic” violations of disabled people’s human rights. She claimed that the report was inaccurate and dismissed the UN – despite overwhelming evidence. This toxicity is a grave warning of what Mordaunt as PM may look like.

Is it over yet?

Then, the next shit in the running is, unbelievably, Boris Johnson. Little more needs to be said about him, except that if the Tory Party give him a second chance as PM, it would probably be its most self-destructive move since appointing Truss – a low bar, we know. So, what’s even the point of spelling out this mendacious fuckwit’s record? Nothing sticks to him, regardless.

Other than these three, the media are muttering more names, too. These include Kemi Badenoch, whose U-turn over net zero in the last leadership election nearly broke her neck and who lashed out on Twitter at journalist Nadine White for simply asking a question. Then there’s Suella Braverman, just to terrify us all – her of the infamous “dream” of deporting refugees and clampdown on lawyers acting against the government.

Ultimately, for the rest of us, this is going to be hell on earth. None of these people will serve our interests – just those of them and their peers. We need a general election, although with its now-right-wing credentials, Keir Starmer’s Labour won’t be much better. There’s little else to say except for ‘we’re fucked’.