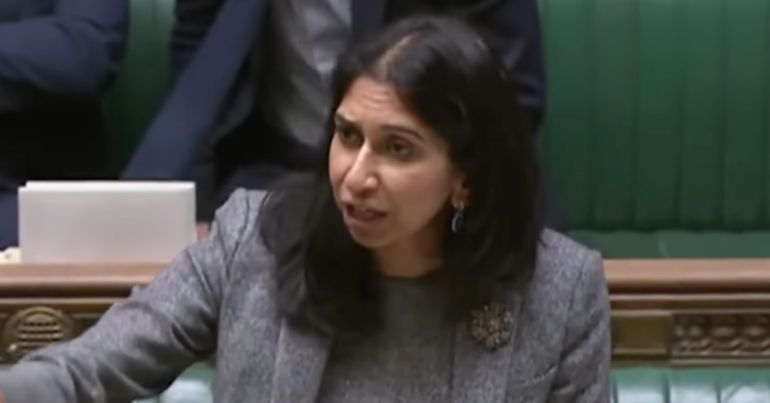 On 19 October, Suella Braverman resigned from her role as home secretary. This came during a night of absolute chaos in Westminster, with reports of manhandling, bullying, and shouting over a Commons vote on fracking. Following a month of political turmoil and mounting pressure, Liz Truss resigned as prime minister on 20 October after just 44 days in the role.

Pride comes before a fall

According to the official story, Braverman was caught sending a policy document about migration to a non-ministerial MP from her personal account, and was subsequently forced to resign. However, her forceful letter to Liz Truss in which she airs “concerns about the direction of this government” and states that ministers had broken “key pledges” suggests a breakdown in internal relations due to the prime minister’s failure to toe the home secretary’s line.

Either way, this makes Braverman the UK’s shortest-serving post-war Home Secretary. Braverman is also the second holder of a great office of state to resign in less than a week, with former chancellor Kwasi Kwarteng being forced to resign on 14 October after the government’s mini budget triggered a plunge in the pound.

Braverman’s fall came the day after she told the House of Commons:

It’s the Labour Party, it’s the Lib Dems, it’s the coalition of chaos, it’s the Guardian-reading, tofu-eating wokerati, dare I say, the anti-growth coalition that we have to thank for the disruption we are seeing on our roads today.

The home secretary was referring to ongoing Stop Oil climate protestors who were blocking bridges while calling for an end to new oil and gas licences. Braverman was urging MPs to support the draconian Public Order Bill, which passed through the Commons later that day. If it passes through the House of Lords, it will give the government and police more power to clamp down on our right to protest.

Responding to the news of the short-lived home secretary’s departure from office, writer Jason Okundaye tweeted:

In her attempt to have the last word, Braverman hit out again at ‘selfish protesters‘ in her letter to the prime minister. It’s telling what else Braverman brought up on her way out. In her resignation letter, Braverman stated:

I have serious concerns about this Government’s commitment to honouring manifesto commitments, such as reducing overall migration numbers and stopping illegal migration, particularly small boat crossings.

This reflects the former home secretary’s cruel stance on immigration, which followed in the footsteps of her cartoonishly evil predecessor Priti Patel.

In October, Braverman proudly told Tory Party Conference attendees that it is her ‘dream‘ and ‘obsession’ to see a flight traffic asylum seekers to offshore detention sites in Rwanda. This scheme comes alongside the inhumane and discriminatory Nationality and Borders Bill, which seeks to criminalise vulnerable people seeking refuge in the UK. The European Court of Human Rights is questioning the lawfulness of plans to ship asylum seekers to Rwanda, a country with a poor human rights record.

Responding to the news of Braverman’s departure, one Twitter user shared:

Please spare a thought for Suella Braverman who has been forced to resign without trafficking a single human being to Rwanda. This must be incredibly hard for her 😭

It looks like you won't get to live your twisted "dream" of deporting refugees to Rwanda.

Now to end that vile policy once and for all 👊🏽

Following a series of humiliating U-turns, Braverman’s exit and a night of absolute chaos in Westminster, people spent the morning on high alert waiting for the prime minister to resign.

Suella Braverman was the shortest-serving Home Secretary for 188 years.

Kwasi Kwarteng was the shortest-serving Chancellor for 52 years.

Liz Truss can beat that. If she goes before Christmas she'll be the shortest-serving UK Prime Minister ever.

On 20 October, the prime minister made a statement outside Number 10 announcing the abrupt end of her short premiership. It now appears that the Tories will have to go through yet another leadership election to determine Truss’ successor. Over the course of writing this article, this chaotic government has stumbled into yet another catastrophe in record time. In fact, Suella Braverman herself is said to be in the running for leader – Rajeev Syal, home affairs editor of the Guardian, reported:

Suella Braverman is widely expected to stand to be Tory leader, although Sir John Hayes, the former minister who is a confidante and adviser to the former home secretary, declined to say if she plans to stand.

“Suella has clearly got a big future in the Conservative party and is widely recognised as a standard bearer for authentic traditional Toryism,” he said.

We’re all about to be even more fucked than we already are.