As the Tory Party collapses, ordinary people are still suffering 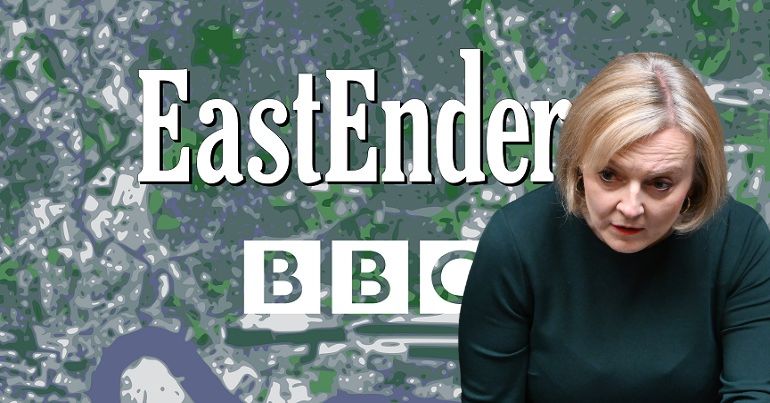 You can’t have missed the Conservative government nearly imploding on Wednesday 19 October. From resignations to ‘don’t give a fuck’s‘, via bullying and a collapse in comms – the Tory party is eating itself alive. While this may seem very entertaining, this Westminster soap opera is just that. Because back in the real world, for the rest of us, life is as difficult as it was before this latest Conservative clusterfuck.

The Ladybird Book of Chaos Volume 2

Liz Truss’s government had its own political Black Wednesday on 19 October. The day started innocuously enough, with a predictable mauling for the PM at Prime Minister’s Questions (PMQs). Keir Starmer’s Labour honed in on Truss’s now-infinite U-turns – with the opposition benches chanting “gone” as he read out a list of her backtracking. Bad dad jokes from Starmer followed, along with the thinly-veiled notion that somehow his right-wing party would be better than the far-right one we currently have in charge. Truss may have thought that was bad enough, but PMQs was just a taster of things to come.

Out of nowhere, in the mid-afternoon, home secretary Suella Braverman quit after she said she broke ministerial rules. Of course, she didn’t really quit because she broke the rules – it’s almost in the Tory Party job description to do that. What Braverman was actually doing was piling the pressure on Truss to do the same. From here, the PM and the government’s day spiralled. She had to appoint arch-critic and expert fuckwit Grant Shapps as home secretary – a perfect fit for Truss’s equally clusterfucking government, you might think. However, even Shapps couldn’t have cocked up as much as the Tory Party did for the rest of the day. His appointment, along with Jeremy Hunt’s, is looking more and more like a coup in the making.

The moment everything spun out of control for the government was the vote on fracking. It seems that the Tories tried to make it a confidence vote in the PM. They did this by enforcing a three-line whip, meaning that any MP who didn’t vote with the government could face the party booting them out. However, just before the vote a minister said it wasn’t a confidence vote – leaving parliament in chaos. Right-wing Labour MP Chris Bryant alleged that he saw senior Tories using “bullying” and physical manhandling to get Tory MPs into parliament to vote. Bryant claimed two of the MPs doing the manhandling were time-travelling Victorian Jacob Rees-Mogg and cigar-smoking prescription sharer Thérèse Coffey.

All this led to the chief and deputy whips resigning. The latter apparently walked out of the Commons screaming “I am fucking furious and I don’t give a fuck anymore!”. Meanwhile, Truss apparently grabbed the chief whip Wendy Morton to stop her resigning. Except no-one, including Downing Street, seemed to know if they had resigned or not. This was probably because they hadn’t actually resigned – as Truss’s comms team confirmed later that evening. Confused yet? You should be – the Tories clearly were. Just to finish off this farce, at 1:30am on Thursday 20 October, the government confirmed that the fracking vote was indeed a confidence vote – after it was, then it wasn’t.

Back in the real world…

So, as of 12:30pm on Thursday 20 October, it’s looking like the Tory Party might sack Truss as she’s meeting with the 1922 committee boss; parliament will investigate MPs’ behaviour, and everyone else outside the Tory Party is calling for a general election. The EastEnders and Hollyoaks scriptwriters must be seething in jealousy. Even the most extravagant of soap operas couldn’t match the Westminster bubble on 19 October. But for the rest of us, all this is a world away from what’s going in our lives. Amid the Tory omnishambles, we found out inflation has hit 10.1% – with the rate on food hitting nearly 15%. Some mortgage rates have hit 14-year highs. More people were skipping meals than at the start of the coronavirus (Covid-19) pandemic. To top it all off, almost 11 million households, one in three, could be in fuel poverty next year.

The Tory chaos may be entertaining for Westminster bubble journalists and Labour MPs looking to score quick dad-joke wins. But behind the awful behaviour, devious agendas, and narcissistic power-struggles lies a democracy and a political and economic system that has collapsed around us. It’s one that never really worked for most of us, anyway. But now, as the Tory Party implodes, the rest of us have to continue to pick up the pieces of our own shattered lives, while Westminster spirals out of control.