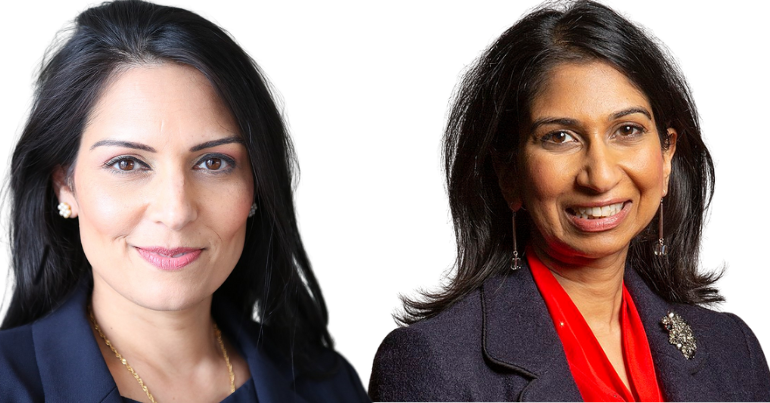 Suella Braverman has been busy with a raft of characteristically draconian policies. In view of climate protests from Just Stop Oil and Extinction Rebellion amongst others, Braverman is set to push forward the government’s anti-protest agenda. The BBC reported that:

Ministers will be empowered to block protests causing “serious disruption” to key infrastructure and goods.

What is the Public Order Bill?

the act will affect our right to protest. But until we’re on the streets, we won’t know exactly what we’ll be arrested for. This is because the act is – in many sections – ambiguous, and will give police forces the freedom to interpret the law as they see fit.

Earlier this year, the Canary’s Emily Apple explained how the government was using the Public Order Bill to enact amendments that did not pass in the PCSC Act:

The bill is basically a rehash of some of the worse amendments to the PCSC act that were chucked out in the Lords.

New offences include locking on, going equipped to lock on, and obstructing national infrastructure. There are new stop and search powers, including a suspicionless power for protest-related offences. This will be used to harass anyone who looks like a protester. But it will particularly impact marginalised communities who already bear the brunt of an institutionally racist police force.

Suella Braverman, much like her predecessor, has been outspoken on stifling the right to protest. When discussing Just Stop Oil protesters, she said:

I will not bend to protestors attempting to hold the British public to ransom.

Preventing our emergency services from reaching those who desperately need them is indefensible, hideously selfish and in no way in the public interest.

This serious and dangerous disruption, let alone the vandalism, is not a freedom of expression, nor a human right. It must stop.

Braverman’s comments further normalise the creeping insistence that protests must not be disruptive. But by their very definition, protests are supposed to be disruptive. Such protests attract people’s attention and amplify the message that it is not acceptable to carry on with business as usual.

Of course, many organisations have spoken out against the government’s plans – just like they had to under Patel’s tenure. The legal and policy officer at Big Brother Watch, Mark Johnson, said:

When Truss’s new Home Secretary, Suella Braverman, stood up to address the Conservative Party Conference on Tuesday, her speech had all the hardline hallmarks of her predecessor, Priti Patel, and the previous government as a whole.

Johnson warned that if the Public Order Bill becomes law, it would be a serious threat to everybody’s right to protest and freedom of speech:

The idea that any free and innocent British citizen should be stripped of their right to protest is chilling. Protest banning orders may sound like the wild fantasies of despots, seeking to put away political dissidents, but in just a few short months they could become UK law.

These proposals risk criminalising anyone who takes to the streets for a cause they believe in, from racial justice campaigners to grieving families looking for answers and justice.

It’s another part of the Government’s plan to hide from accountability for its actions and make itself untouchable.

Moreover, the bill isn’t only unpopular with human rights organisations – even some emergency services are hesitant to support it. The charity JUSTICE came out in opposition, saying:

the Bill would serve to give the police carte blanche to target protesters – similar laws can be found in Russia and Belarus. It is therefore unsurprising that equivalent measures to the Protest Banning Orders were previously roundly rejected by the police, Home Office and Her Majesty’s Inspectorate of Constabulary and Fire & Rescue Services on the basis that such measures “would neither be compatible with human rights legislation nor create an effective deterrent.”

A right worth fighting for

Clearly, Braverman is seamlessly continuing the draconian work of Patel. Her department is trying to enact legislation that is repressive and stifling. Just like the PCSC Act brought out protesters across the country, we need to do that again in order to stop the Public Order Bill. Braverman’s framing of protesters as petty vandals is a line in the sand – she’s letting us know that she does not hold the right to protest as a right worth protecting.

Disruption and dissent are central to a functioning democratic society, no matter what Braverman says. The Network for Police Monitoring (Netpol) has written an explainer on how to defend dissent. They mention the importance of knowing your rights, ‘resisting police surveillance’, and ‘challenging the use of police powers’.

As the climate crisis and cost of living crisis worsens, and as politicians engineer an economic crisis, protest is going to be an essential tool in protecting people in our communities. We must resist any attempts to erode the right to protest and dissent. It’s a right that we’re clearly going to need in the coming months.