Van Gogh's painting is fine, but the planet is not - Canary 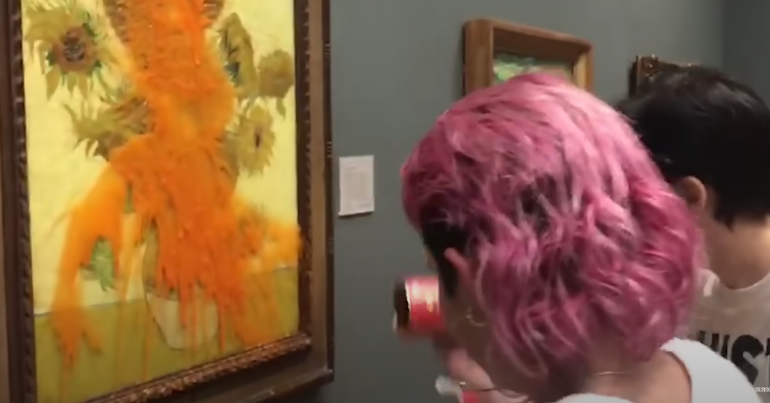 Activists from Just Stop Oil have thrown tomato soup at the glass covering Vincent van Gogh’s ‘Sunflowers’. The paining was on display at the National Gallery in London. One of the activists said:

The cost of living crisis is part of the cost of oil crisis, fuel is unaffordable to millions of cold, hungry families. They can’t even afford to heat a tin of soup.

Activists with @JustStop_Oil have thrown tomato soup on Van Gogh’s Sunflowers at the national Gallery and glued themselves to the wall. pic.twitter.com/M8YP1LPTOU

Since then, the news has made headlines around the world and sparked huge discussions on social media. Some people were against the direct action for a number of reasons:

Nope: your message was lost the minute you threw tomato soup on a painting by a man who lived his life to bring beauty to the world.
You are trash. TRASH 🤬 pic.twitter.com/rdEgLMo2r6

the fuck did van gogh do to hurt the climate https://t.co/ZvgLbHHzSy

Art is for everyone. So is the planet. The National Gallery doesn’t charge people admission. Throwing tomato soup over a piece of work created my a man who was ignored while he was alive is a reductive and ignorant action to take. It really is narcissism in its truest form.

This reaction, however, is quite short-sighted.

Let’s look at the facts

For all the outrage over the damage these activists could have caused, it’s worth bearing in mind that the painting is behind a piece of glass:

This tweet is wrong. Most headlines about the incident are wrong. Activists splashed tomato soup on THE GLASS PANEL that protects the Van Gogh. This isn't nit-picking. The painting was unharmed, as the activists knew it would be, & is already back on view. https://t.co/aUvf9UTa5g

In fact, as Dave Macladd pointed out, the activists have done their job in highlighting their cause:

– the painting was entirely undamaged (it’s behind glass)

– no one was inconvenienced

Some people pointed to the fact that Getty Oil heiress Aileen Getty gave a $500,000 grant to the Climate Emergency Fund, which helps finance Just Stop Oil. The argument here seems to be that Just Stop Oil shouldn’t be taken seriously as activists because they accept money, through a second party, from an oil giant. Of course it’s important to follow the money and see who funds what. However, there’s more to it than that:

Seeing a lot of people retweet this. Aileen Getty + the Getty family’s money is inherited from oil but they don’t have current activity in the oil industry. Aileen Getty’s foundation funds climate change initiatives which is what we’ve been demanding wealthy people do. https://t.co/UWHEgPIh8D

Given the raft of criticism aimed at these two protesters – what kind of direct action is acceptable for activists to carry out? One social media user made a similar point:

Just curious about the appropriate tactics, because if the tomato soup idea was silly and alienating, and setting yourself on fire isn’t enough, and lawmakers criminalize protests, and blocking traffic is inconvenient, and books about activism get banned, what are the options?

Wynn Bruce was a climate activist who set himself on fire on the steps of the US Supreme Court to protest the climate crisis. One of Wynn’s friends, Dr. K. Kritee, said:

This act is not suicide. This is a deeply fearless act of compassion to bring attention to climate crisis. We are piecing together info but he had been planning it for at least one year. #wynnbruce I am so moved.

Just Stop Oil protesters are said to cause “traffic chaos” when they sit down in roads and climb bridges as another form of direct action. Members of the public often confront protesters for the disruption they cause. Meanwhile, the criminalisation of protest in the UK is gathering pace. The Canary’s Emily Apple explained as much in a video:

There are new stop and search powers, including a suspicionless power for protest-related offences. This will be used to harass anyone who looks like a protester. But it will particularly impact marginalised communities who already bear the brunt of an institutionally racist police force.

Protest too much and you could receive a serious disruption prevention order. You don’t even need to commit an offence to get one.

In a functioning democracy, people must be able to stand up to power – but the Government is clamping down on dissent to hide from accountability.

The truth is, there’s no form of protest that the mainstream media or compliant members of the public will think is acceptable. The reason for this is not because activists are not thinking things through, it’s because the status quo must be defended at all costs. The reason these two activists have been flooded with criticism is because it’s not in the interests of powerful institutions and people to meaningfully tackle the climate crisis.

We have known about this for half a century, and have failed to do anything meaningful about it. What’s it going to take for us to wake up?

The stifling of dissent and protest doesn’t only happen in government. It happens in our communities when people object to how people protest, instead of paying attention to why it’s needed. Of course, we can always strive to create more meaningful direct action – but tearing down the actions of every activist is hardly the way to go about doing that.

After all, as the capitalists of Earth continue to condemn us all to the “widespread, rapid, and intensifying” climate crisis, what’s a bit of tomato soup on the glass of a painting?