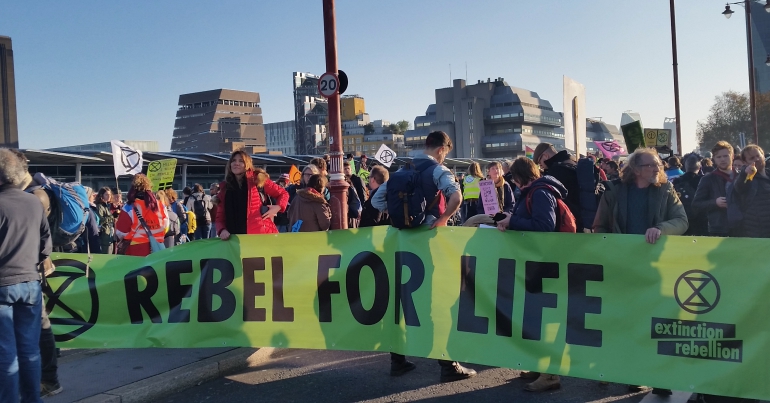 On 17 November, thousands of people occupied five bridges in central London. Protesters from Extinction Rebellion (XR) claimed that 6,000 people took part in the protest and that:

This is the first time in living memory that a protest group has intentionally and deliberately blocked the five iconic bridges of central London.

As The Canary previously reported, the XR campaign aims to get people taking part in non-violent but disruptive acts of civil disobedience. In a press release seen by The Canary, XR stated that this protest intended to:

raise the alarm on the climate and ecological crisis – and to put pressure on the Government to come clean on the fact that there is a climate emergency.

The group called 17 November, Rebellion Day. It said this is:

The climax of Extinction Rebellion’s first week of civil disobedience against the British Government for its criminal inaction in the face of the climate and ecological emergency which we all face. This week, over 50 people have been willingly arrested. Today, thousands of people descend upon the capital.

We demand the government start taking the climate crisis seriously and implement the policies to deal with it. We need radical change and we need it now. Hear us.#ExtinctionRebellion#WestminsterBridge pic.twitter.com/62DzjeYwsF

Images showed the impact of the action:

“today we are being brave and courageous and turning towards reality: our tiny blue planet is in danger.” Sitting together in paramount square. #climateemergency #zeroemissions2025 #XR via @ClimatePsych pic.twitter.com/ZtCXtFON2X

According to the Metropolitan Police, by 5.20pm, 85 people had been arrested.

Solidarity with all those peacefully resisting species extinction.

Conventional politics has failed us

That’s why we need #ExtinctionRebellion https://t.co/S80Iv8ESmR

Our own @GreenJennyJones and @MollyMEP took part in civil disobedience today as part of extinction rebellion day of action. With the IPCC telling us we have just 12 yrs to avoid climate destruction the time to act is NOW. https://t.co/Fs5EvnOb3B

Other groups shared information and advice as reports of arrests rose:

If you are arrested at #ExtinctionRebellion #RebellionDay remember:#NoComment without first obtaining legal advice from a solicitor#NoCaution do not accept a caution#NoDutySolicitor – ask for one of the solicitors on the @GBCLegal bust card

Arrestee support is a vitally important practical way of showing that we care about each other. Please contact @ExtinctionR if you can help #ExtinctionRebellion #RebellionDay https://t.co/nmJ4VsxjWU

Extinction Rebellion plans to continue action until the government acts upon its demands to: