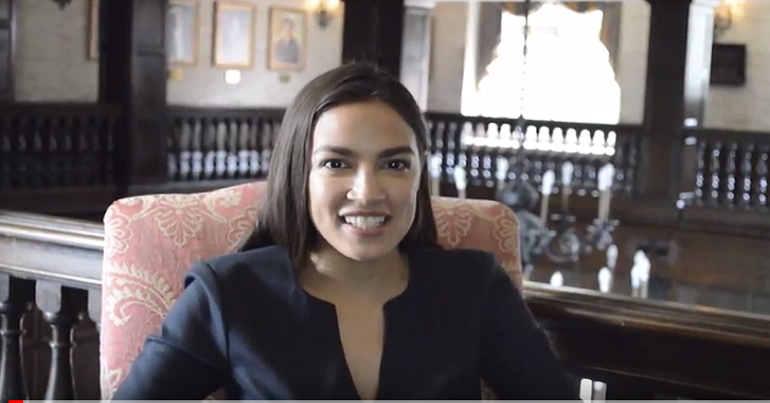 The US’ youngest ever congresswoman, Alexandria Ocasio-Cortez, is disembodying conservatives like it’s going out of fashion. Since the Democrat representative-elect entered politics, establishment figures have relentlessly attacked Ocasio-Cortez, a young Black woman and self-described democratic socialist.

“Darkness hates light, that’s why you tune it out”

They may now be regretting it. Take Washington Examiner reporter Eddie Scarry, who wrote in a now-deleted tweet:

Ah yes. @eScarry deleted it, but here it is. She seems appropriately dressed for her new gig as a Congressperson to me. https://t.co/n30ERg91s7

If I walked into Congress wearing a sack, they would laugh & take a picture of my backside.

If I walk in with my best sale-rack clothes, they laugh & take a picture of my backside.

Dark hates light – that’s why you tune it out.

Free from any corporate funding, Ocasio-Cortez’s policies include a human right to housing, Medicare for all, ending private prisons and universal higher education.

Fox News, meanwhile, has attacked Ocasio-Cortez both for displaying too much glamour and for showing signs of struggling. The 29-year-old wore a $3,000 outfit for a photo shoot with Interview magazine. Fox News hosts said Ocasio-Cortez had “expensive tastes for a socialist”, with one guest host saying “I want a pair of $600 shoes, I think she should redistribute”.

But Ocasio-Cortez lampooned them in response:

You don’t get to keep the clothes, duh. Get used to me slaying lewks because I am an excellent thrift shopper.

Ocasio-Cortez comes from a modest upbringing in New York. Despite having $7,000 saved, she cannot afford to live in the expensive DC area until she receives her salary from Congress.

Still, Fox News also ridiculed her for that, calling it “a brilliant political line”, with contributor Julie Miller continuing:

Ocasio-Cortez demolished them in response, saying:

It is bizarre to see 1%-salaried anchors laugh at the US housing crisis.

But Ocasio-Cortez isn’t just a grassroots-funded progressive with universalist policies and impressive comebacks. She joined progressive, anti-corporate funding groups such as the Justice Democrats in protesting Democrat house leader Nancy Pelosi, outside her personal office. Ocasio-Cortez and the progressive groups are demanding the Democrats come up with a plan to “switch to 100% renewable energy” in the US.

It seems the more the American establishment attacks Ocasio-Cortez, the stronger she becomes. It’s refreshing to see a young progressive refusing to play the US establishment’s games and defining herself on her own terms. Fantastic job.