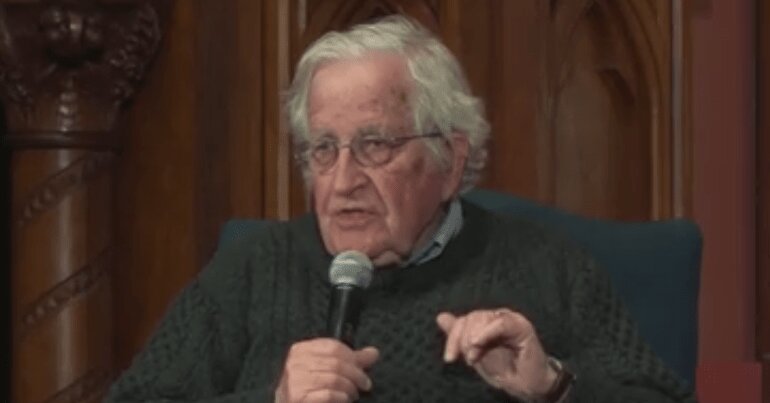 Well, the Assange arrest is scandalous in several respects. One of them is just the effort of governments—and it’s not just the U.S. government. The British are cooperating. Ecuador, of course, is now cooperating. Sweden, before, had cooperated. The efforts to silence a journalist who was producing materials that people in power didn’t want the rascal multitude to know about – OK? – that’s basically what happened… This is the kind of thing, the kind of scandal, that takes place, unfortunately, over and over.

The author of over 100 books continued:

Aside from an alleged breach of bail – see a timeline of his case here – Assange was arrested in relation to an extradition request from the US. The now unsealed indictment alleges that Assange is guilty of ‘conspiring to commit computer intrusion’. It claims that Assange helped whistleblower Chelsea Manning crack a password in order to make it more difficult to identify her as the source of the Iraq and Afghanistan war logs. The Canary, meanwhile, has identified fundamental flaws in the indictment that threaten journalism worldwide.

The Iraq war logs show that US and UK officials lied about having no official statistics on deaths. The leaks identified over 66,000 civilian deaths from 2004 to the end of 2009. They also revealed that the US military indiscriminately gunned down over a dozen people in Baghdad, including two Reuters media staff.