Yesterday was the final straw. A veteran BBC journalist is 'now ashamed' of his 25 years of service. - Canary 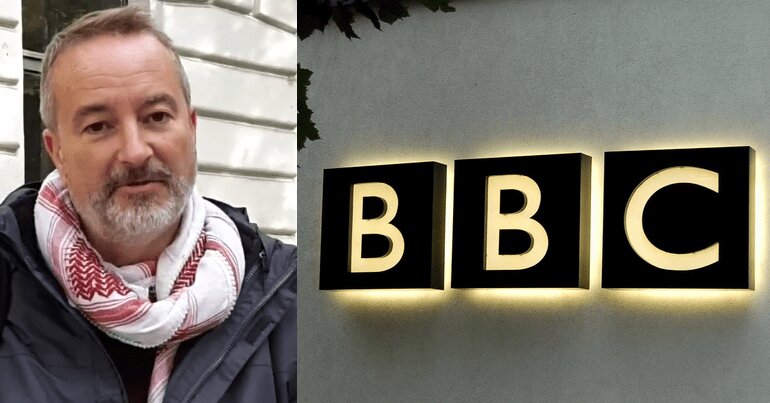 The 14 April edition of the Andrew Marr Show was the final straw. A BBC journalist until 2015, Patrick Howse is “now ashamed” of his 25 years of service. In a letter to BBC director general Tony Hall, he focused on the organisation’s coverage of a recent speech from Nigel Farage. Howse points out the former UKIP leader targeted MPs against the background context of a far-right terrorist murdering Labour MP Jo Cox on 26 June 2016. He accused the BBC of ‘transmitting fascist propaganda’ through uncritically broadcasting the speech.

In his letter, Howse said he used to be “proud” to work at the BBC, despite conditions he faced in places such as Baghdad:

In the course of my career, I was shot at, kicked, tear-gassed, spat at and pelted with stones, bottles and petrol bombs… But I believed passionately in what the BBC was doing.

Howse criticised what he called the BBC‘s “dismal coverage” of Brexit. But the turning point came when Howse saw the BBC‘s reporting of Farage’s Brexit party launch. And he went public with his concerns after comparing that coverage to Andrew Marr’s critical interviewing of Labour MP David Lammy.

That finally changed with the coverage of the launch of Nigel Farage’s new party, and in particular his speech where he said he wanted to put the “fear of God” into MPs.

If these words had come from the lips of an IS [Daesh (ISIS / ISIL)] spokesman they would have (rightly) been condemned. But Mr Farage was not only allowed a platform to make these remarks, he was not confronted with their implications, and the audience was not reminded of their context. That context is, of course, that Jo Cox was murdered by a Nazi less than three years ago, and just a few days ago a threat against the life of another MP, Rosie Cooper, was dealt with by the courts.

The BBC declined to comment in an email to The Canary. In his letter, Howse continued:

At best Mr Farage’s comments were criminally irresponsible; at worst they were an incitement to political violence and democracies don’t work if elected representatives live in fear. I’m astonished that it seems you need to be reminded of this. The coverage of this speech has actually made me see things in a different light. I am no longer proud to have worked at the BBC – I am ashamed to be associated in any way with an organisation that facilitates fascism and transmits its propaganda uncritically and without challenge.